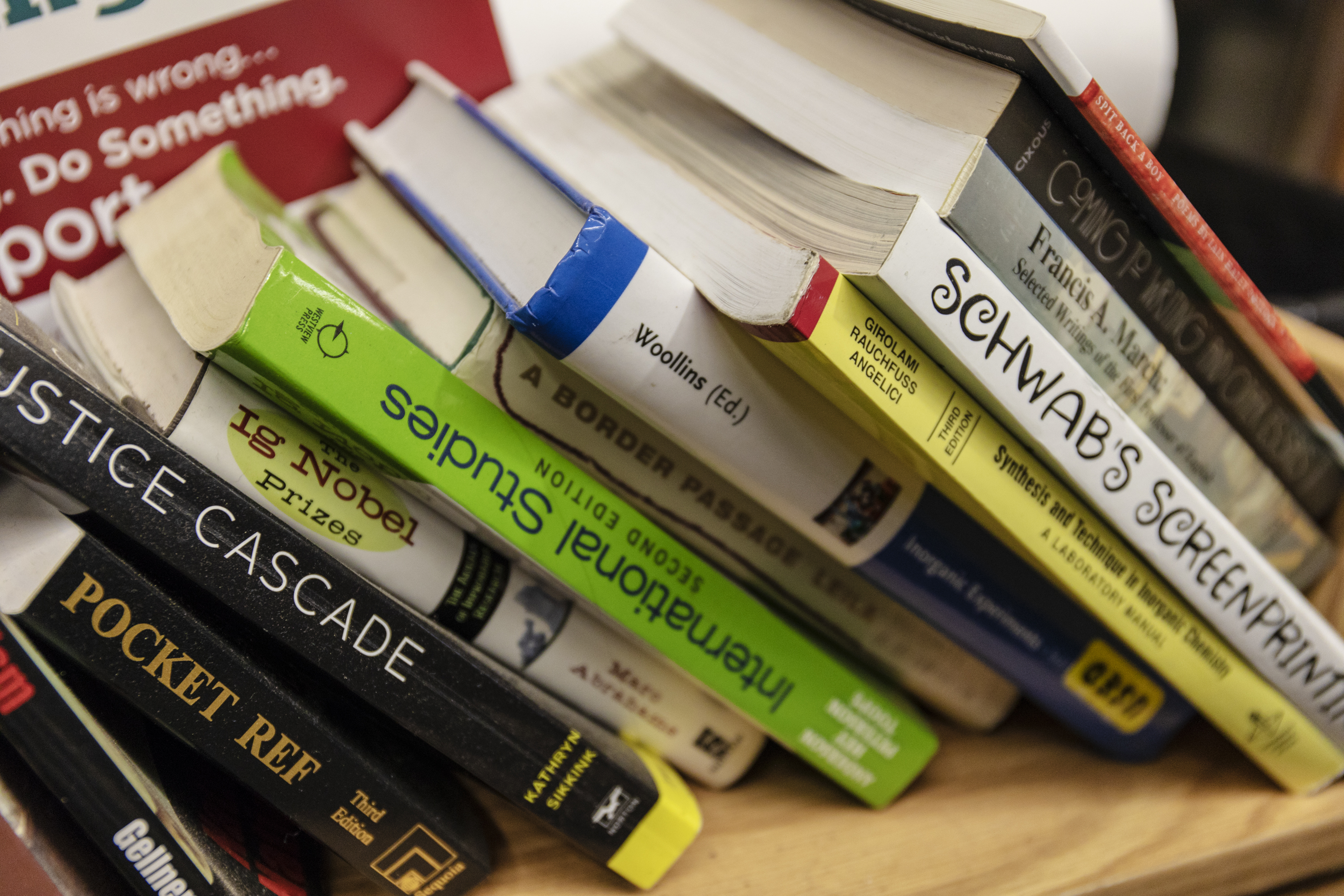 The Lafayette’s arts writers advise you to broaden your perspective and give their book recommendations a shot. (Photo by Elle Cox ’21).

Entering your first year at Lafayette College can be daunting. You’ll experience many new things and learn a lot about yourself in the process. If you’re looking for something to help ground yourself or just something to entertain you in your downtime, this list is for you. In it, you’ll find four recommendations for books that may challenge your views and shape your mind—books you will hopefully enjoy. We’ve assembled a potpourri for your reading interests that blends baseball, existentialism, communication and many more topics, including what it means to live as a college student and as a human being. Enjoy.

Man’s Search for Meaning” by Victor Frankl is perfect for the student looking for an immediate and easily achievable positive impact on their lives, as the book is both concise and packed with quality material. Victor Frankl was a Jewish doctor imprisoned at Auschwitz during World War II. Frankl tells the story of his time in the concentration camp and the psychological and philosophical tools he developed to transcend his captivity and gain more freedom than his captors. One of many notable quotations from this book is as follows: “Everything can be taken from a man but one thing: the last of the human freedoms—to choose one’s attitude in any given set of circumstances, to choose one’s own way.”

The second half of the book deals with the psychology Frankl developed out of his circumstances, called logotherapy. Logotherapy encourages the patient to accept responsibility for their actions and when they are unable to change their circumstances, to change themselves instead. Readers will strengthen the agency they perceive in their own lives by reading this book.

“The Plague’ by Albert Camus

Camus’ “The Plague”, considered by many to be a seminal existentialist work (a label he denied throughout his life), is the story of a moribund town in French Africa seized by an implacable epidemic. In it, Camus drags his characters through an absurd series of events and painfully details their inability to cope with them.

The story follows Dr. Rieux and the plight of his many dying patients. Rieux cycles through an almost mechanical routine of visiting and treating his patients, while grappling with the hopeless nature of the town’s situation. Throughout the novel, Rieux has repeated run-ins with the enigmatic Tarrou, a tourist of the psyche through whom many of Camus’ absurdist ideas are communicated. Whereas Rieux is altruistic and a true humanist, Tarrou is principled. Though they share the same ultimate goal, Camus challenges the reader to identify the disparity in character that make them profoundly and uniquely human.

Though discouraging at times, Camus’ world is not without hope; or, it may be better to say that the world of Camus is not without meaning. Both Tarrou and Rieux have impetus to save the inhabitants and explore the absurd world in which they live, finding meaning in self-imposed actions and decisions. Hence the timeless mantra: existence precedes essence.

“How Not to be Wrong” by Jordan Ellenberg

For the mathematically inclined and the mathematically disinclined both, “How Not to be Wrong” is an immersive synthesis of ideas across many topics; lottery schemes, artificial intelligence, Renaissance art, and even God. Jordan Ellenberg takes the reader beyond the banality of classroom math into the world in which we live, a world with mathematics hidden in every corner.

Some readers may be disappointed to learn that, even with perfect practice of the lessons from the book, the chaotic and unpredictable nature of the world often triumphs. What Ellenberg offers is not impeccability, but rather a way of applying mathematical thinking to everyday life. Understanding how mathematicians think—and who better to explain than the MacArthur Professor of Economics—is a powerful tool both when solving problems and counteracting misleading information.

“The Art of Fielding” by Chad Harbach

“The Art of Fielding” by Chad Harbach is a 2011 novel that follows the stories and relationships around several individuals at the fictional Westish College, among them Henry Skrimshander, the small but skilled shortstop. He was going to follow his dad to the local factory until his talents were noticed by Mike Schwartz—Henry’s mentor and the catcher on the baseball team who holds aspirations of his own for a better life after college.

Harbach’s breadth of characterization and enticing plotline bring together an accurate college tale which will strike a chord in the reader. This is an excellent read for those who desire something more literary, as well as those who simply lust for an accessible yet satisfying tale that you can’t put down. The framing device of baseball enhances the story and adds another layer of reality. With the added backdrop of college and the characters Henry and Pella beginning college from two very distinct positions, this book is ideal for any college student.