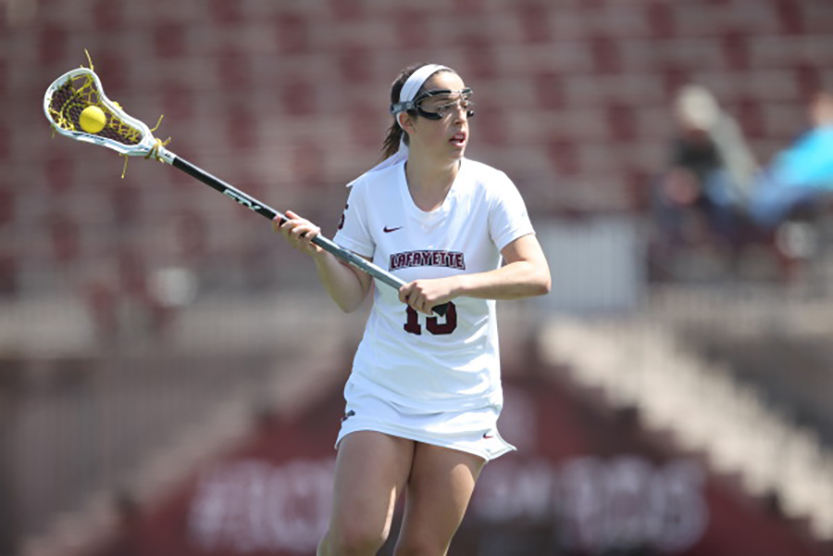 The Lafayette women’s lacrosse team had their strongest fought game all season against Colgate this past weekend. Colgate is ranked 10-6 overall, and 5-4 in the Patriot League, compared to Lafayette’s 5-12 and 2-7 records. Unfortunately, the Leopards’ resilience did not lead to a success by the end of the game.

The game started off head to head as both teams scored six points in the first half. Each goal scored was immediately followed by a goal from the opponent. The first goal for Lafayette came from junior attacker Jane Kirby with 26:04 left in the half. Junior midfielder Hannah Davey and sophomore midfielder Bella Alampi each put two shots in the back of the net, followed by one last goal from Kirby, making it 6-6 at the half.

Colgate started off the second half with a goal in the first 2:25 seconds. They put another one in less than two minutes later. After the two early goals from Colgate, junior attacker Emma Novick scored off a free positioned shot. With 16:31 left in the game, senior midfielder Kristin Schaen had a goal, which started a ripple effect of three more goals in a span of three and a half minutes. One goal from freshman attacker Anna Stein, two from Novick.

“Bella contributed a lot all over the field, both with scoring goals and making big plays on the draw throughout the game,” junior defender Annelise Kinney said.

Kinney and freshman goalkeeper Quinn Lacy also had a remarkable performance, especially in the first overtime, making Colgate work that much harder for a goal, leading to a second overtime.

The second overtime was also a well fought battle. However, with 1:59 left in overtime, Colgate’s Payton Gabriel, who was the lead scorer for Colgate in the game, scored the game winning goal, ultimately ending the game 13-12.

Lacy had a strong game in goal, playing all 64 minutes of the game, with nine saves, while Colgate’s goalie saved 10.

“The senior class this year was an awesome group,” junior Amelia Heisler said. “Last year our seniors were all really talented and made a huge impact on the field for us, and this year’s seniors definitely had big shoes to fill. I think they absolutely exceeded expectations. All five of them had different roles in what they contributed to the team. But in each of their roles they were amazing leaders and teammates. They really improved the culture on our team and put the team in a really good place to improve next year.”

Overall the Lafayette women’s team is ranked eighth in the Patriot League, in front of American and Bucknell.

“I think this season was a big step forward for the program,” said Raymond. “It was the most talented team we have had in my four years and although our record doesn’t necessarily reflect that I think we set the team up for greater success in the future.”

As the season wrapped up for the women’s lacrosse team, Kirby, Novick and Smith were selected to the 2018 Academic All-Patriot League Team. Kirby also landed a spot on of the All-Patriot League Second Team as a result of her remarkable performance this past season.