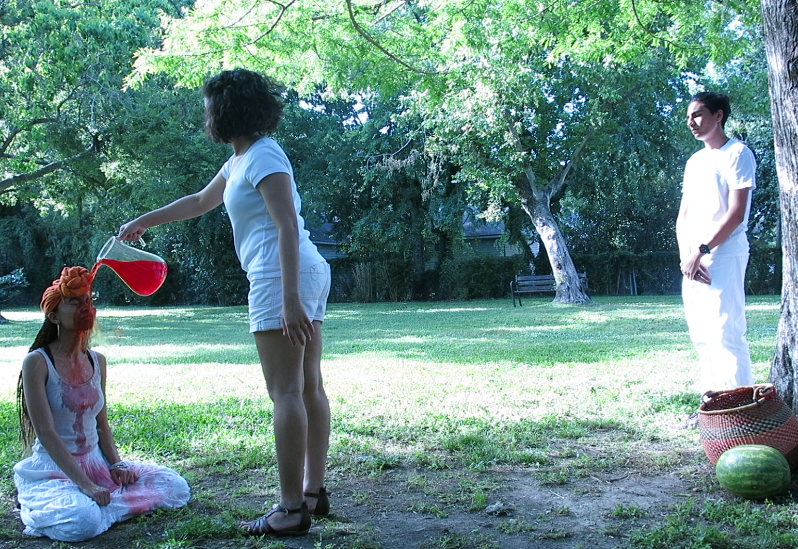 “Student Artist Spotlight” is part of a series meant to highlight the achievements of student artists at the college.

Elle Cox ’21 was a 2017 Presidential Scholar of the Arts, a highly selective and immensely prestigious award given to only 20 students each year. It is the highest honor a high school artist can achieve.

“As an artist, you don’t really hear about awards, for artists specifically, you hear about people receiving them but they are all passed away,” Elle said. “As an artist, to be recognized by the White House, [that] was definitely amazing.”

Although she didn’t officially decide to go into art until she attended a visual arts high school in her home state of Texas, Cox says that art was an immutable part of her life growing up.

“I was raised in a very musical family. I was always watching plays,” Cox said. “Since I was young, I’ve encompassed myself in arts across the spectrum. My grandma was also an artist, a really amazing painter.”

As a part of the selection process for the Presidential Scholar of the Arts award, Cox was invited to Miami to work with many famous artists, including Derrick Adams, a New York-based artist who is now one of her artistic mentors.

“I worked very closely with him. His work is very powerful, and he talks about a lot of different issues related to the black experience, exportation and stuff like that,” Cox said.

Along with art, Cox plans to double major in psychology, with a potential minor in Spanish.

“I think those two things [psychology and art] go so well together. I love psychology.”

Drawing her artistic influence from literature, music, theatre and other expressional art forms, Cox makes clear her influences are as eclectic as her abilities.

Literature such as Kate Chopin’s “The Awakening” and Mary Shelley’s “Frankenstein” have played roles in her artistic development alongside artists such as Frida Kahlo, Kara Walker and LaToya Frazier.

Walker and Frazier, in particular, have influenced her more modern works, with other influences coming from better-known sources.

“As I started getting older, I started getting into more feminist works…looking at all these artists that are working with topics surrounding the black experience,” she said. “When I was younger, my first big influence was Salvador Dali, because he was a surrealist painter.”

“I was influenced by him because he thought about things in such a complex and strange way. That was the first time I saw art that can be different from the norm, you know, different from traditional paintings.”

Cox’s work has evolved over time.

“As of now in college, I’m going into this [political] dialogue but still focused on the history, including civil rights and how that never leaves my dialogue,” she said. “Even if I’m experiencing my life as a black female right now, it’s still connected to my past.”

The ideas of individuality and originality have also been a key theme in Cox’s development as an artist.

“I’m a little bit of a rebel… there’s no one way, there’s no one path,” she said. “That’s why I have drifted from traditional art forms, mostly because I am so interested in how I can use everything around me to create this message and not have to stick to what may be perceived as art.”

Disclaimer: Elle Cox ’21 is the Photo Editor for The Lafayette.