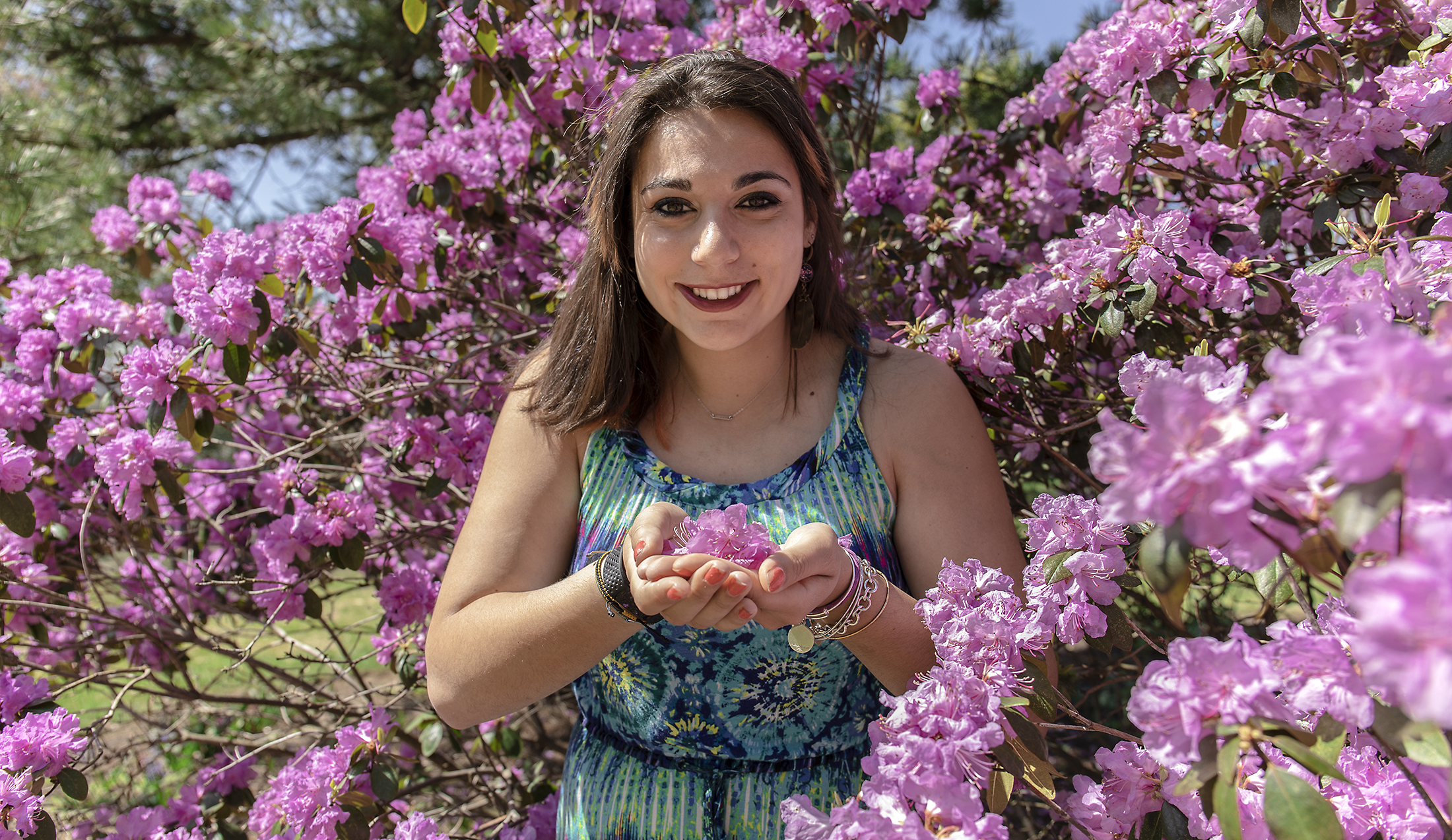 Kenzie Corbin is the Pepper Prize recipient for the Class of 2018. The Pepper Prize is awarded annually to the senior “who most nearly represents the Lafayette ideal.” (Photo by Elle Cox ’21)

Channeling the spirit of Camp Ernst in Northern Kentucky, which she attended every summer in her childhood, Kenzie Corbin ’18 managed to engage with a young boy traumatized by bullying who was previously unresponsive to the other nurses at the Lehigh Valley Health Network in Muhlenberg.

“There was this one boy that I remember just so intensely. He was in this weird catatonic state and had been super bullied. He couldn’t even talk,” said Corbin, who volunteered at the hospital last year. “None of the nurses could connect with him, and I started doing camp songs and games with him and got him talking, and it was just like, ‘Wow.'”

This was one of the moments, Corbin said, that reaffirmed her passion for working with children, which originally stemmed from her time at summer camp. In particular, Corbin hopes to work in adolescent psychiatry.

“I’ve recently gotten into meditation mindfulness…so when I go into medicine I’m hoping to do more alternative medicine with psychiatry…less drugs and medicine and more holistic healing,” Corbin said.

Corbin, an Ohio native on the pre-med track, is set to graduate with a neuroscience and French dual degree with a minor in bioengineering and is currently applying to 18 medical schools for fall 2019. She is looking to get an MD-MPH, with is a public health dual degree with an MD.

For the past four years, Corbin has been awarded with the Henrietta S. Treen and Edith A. Grouch Scholarships, which are given to students that are preparing themselves for a profession in ministry, law or medicine. Corbin is also a Marquis Fellow and Creative and Performing Arts (CaPA) Scholar and participated in Science Horizons, a research mentorship program.

Currently, Corbin is conducting research through the Preminger Gerontology Scholarship to track the effects of meditation, mindfulness and yoga on the senior population at Gracedale Nursing Home in Nazareth, Penn., twice a week. This work is indicative of Corbin’s goal to use alternative forms of therapy for dealing with mental illnesses.

Mental health has become an important focus of Corbin’s life in the past couple years, standing out as her true passion amongst all her involvements on campus and elsewhere.

“[Mental health] I think has honestly become…my life purpose, and that’s a big, bold statement, but I honestly feel that serving in the mental health community is my main goal and my main striving force of why I’m here on this Earth,” Corbin said.

Corbin is one of the founding members of the Mental Health Coalition which started this year. She said it’s one of the most important things she’s been involved in at Lafayette.

“After the suicides of a few of [her] friends last year,” Corbin said she felt the campus was missing a way of educating and coping with the issues of mental illness. Over the summer, Corbin connected with Sophia Giovanelli ’20 and combined their ideas to start the organization.

“I guess what I’m most proud of is trying to change the culture here to just more accepting and more of a community and really trying to reach out to individuals, especially first year students,” Corbin said.

Working with first year students has been important to Corbin in her time on campus, as well, she said. Admissions ambassador for four years and current chair of the Lafayette College Ambassador Program, Corbin has been constantly involved in the first year experience. Another way Corbin feels she is able to connect with first years on campus is through Aflicktion, the club ultimate frisbee team on campus, which she has been a part of since her first year. Corbin has been a consistent presence in the Pre-Orientation Service Program, participating all four years of her college career.

“The first day of class, I remember walking across the quad and seeing people play frisbee… and then I remember the people on the frisbee team like came up to me immediately… I found such a family and such a strong community in that group of people, and that day stands out,” Corbin said.

Coming from outside Cincinnati where Corbin said she felt people were very similar, finding a diverse community at Lafayette was extremely important to her.

“I was always seen as the one that was going to leave and go to other places,” Corbin said.

For Corbin, the dream destination was France. Corbin’s love for the language and the country ultimately led to her winning the James Alexander Petrie Prize in French as well as induction to the Pi Delta Phi National French Honor Society. In spring 2017, Corbin’s dream became a reality when she studied cinema and photography in Paris, France.

Corbin said her time in France changed her life in more ways than one. While there, Corbin read a book called ‘Happiness of Pursuit,’ which inspired her to put her many ideas into action.

“I just told myself, especially after the death of my friends [by suicide], ‘You don’t know when you’re going to die, so why wait when you have an idea?’ and so, that’s…been my motto this whole year,” Corbin said.

As a result of this shift in perspective, Corbin made a bucket list of everything she wanted to do her senior year: Run a marathon, start a non-profit, plan a 5k, publish a book, have an art show and move to France. She has managed to do the first five thus far, and this September, Corbin will fulfill her final goal.

Corbin will be moving to Lille, France, in September to teach English through the Teaching Assistant Program in France. She’s looking forward to reconnecting with her host family, running and walking through the gardens and revisiting the cafe where she would write her poetry and other creative pieces.

Ghandi’s quote “Be the Change.” “I have the quote tattooed on my foot with a unicorn. It’s like a consistent daily reminder to be a unicorn, to be different, to go out in the world and do your own unique thing and be the change,” Corbin said.

“Similar to [what] I said earlier, don’t just think or wish something was different, make it different.”