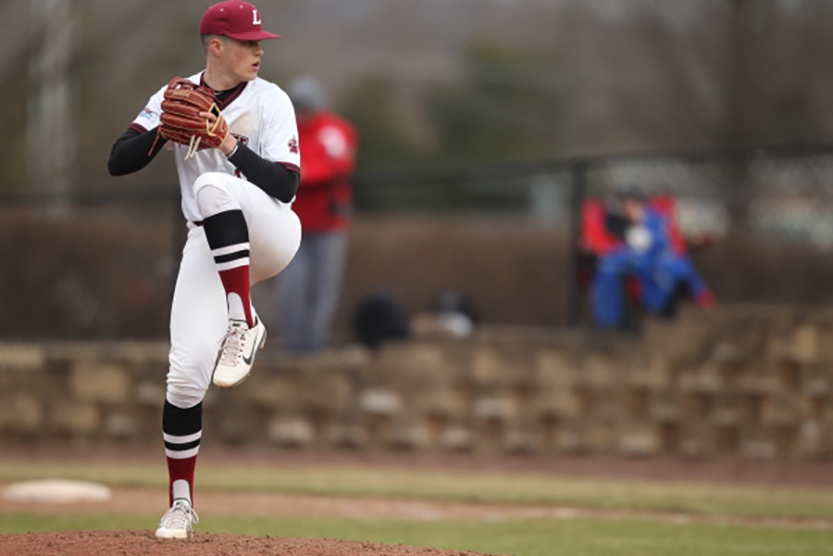 The Lafayette baseball team hosted two doubleheaders against Bucknell and Navy this past weekend at Kamine Field. Before Saturday’s first game, the team honored the nine graduating seniors in the class of 2018.

Lafayette hosted Bucknell on Saturday, where sophomore pitcher Brett Kreyer started on the mound for the Leopards. He threw for five innings while giving up five earned runs and seven hits. After going down two runs in the fourth inning, the Leopards responded with a run of their own following a single from senior first base Patrick Nelson who reached home after a triple to left-center field by junior infielder Spencer Rouse. This momentum was short-lived, as Bucknell put up five more runs in the sixth inning.

The Leopards had a chance after loading the bases in the bottom of the sixth but couldn’t convert the opportunity. The Leopards were able to put up eight hits in the contest but only converted it into one run. Bucknell’s starter, Conner Van Hoose, who’s been frustrating the Leopards all season, pitched a complete game and struck out eleven.

Senior pitcher John Cain started Saturday’s second game for the Leopards. He pitched four innings, giving up only three runs and striking out four. Lafayette responded to a Bucknell run by scoring one of their own in third. Sophomore infielder John Marti led the inning off with a double, and sophomore infielder Trey Durrah brought him home with a base-hit to center field.

Bucknell regained the lead in the fourth, going up 3-1, but the Leopards were able to tie it back up in the bottom of the sixth. Junior first base Richard Villa doubled with bases loaded to bring two runners home. At this point, a storm rolled in and the game had to be called due to inclement weather. The result was announced as a tie, and no make-up date has been scheduled yet.

Lafayette also hosted a doubleheader against Navy on Sunday. Navy started off with three early runs to begin the game. Senior outfielder Luke Robinson responded, putting the Leopards on the board with a two-run homer to right-field. Following that, senior infielder Steven Cohen crushed a solo home run to right field to tie the game at three apiece. Navy went on to obliterate Lafayette pitching with seven runs in the fifth and sixth inning to put the game away, winning the first one 10-4.

In the second game, Navy got out to an early start, going up 8-0 by the third inning. Durrah ended this streak with a two-run bomb to right field, bringing home freshman catcher Hunter Silvernail. Navy added one more run in the seventh inning to make it 9-2. However, Lafayette scored two more in the eighth after a hit by senior catcher Nick Shah that was mishandled by the shortstop.

Lafayette continued this effort in the ninth, as Durrah led off the inning with his second home run of the game. This rally continued with a three-run homer by sophomore outfielder Jake Sniegocki to reduce Navy’s to just two. However, Navy held off the Leopards late-game rally to complete their season sweep.

“I think our team does a really good job of feeding off one another when times get tough throughout the season,” senior catcher AJ Kloehn said. “We have a close-knit group that is very good at picking each other up when things aren’t going our way.”

When asked what positives he saw from the weekend, Kloehn said “I think we showed that when we are able to fire on all cylinders, both offensively and defensively we will be a very difficult team to beat. Moving forward, we’re looking to keep building upon what we have established so far this season.”

Following last weekend’s series, the Leopards move to 13-32-1 overall and 2-18-1 in Patriot League play. This upcoming weekend, Lafayette will travel to Worcester, Mass. to take on Holy Cross on Saturday, then to West Point, NY, to take on Army on Sunday for two more Patriot League doubleheaders. The Patriot League Tournament begins on May 12.