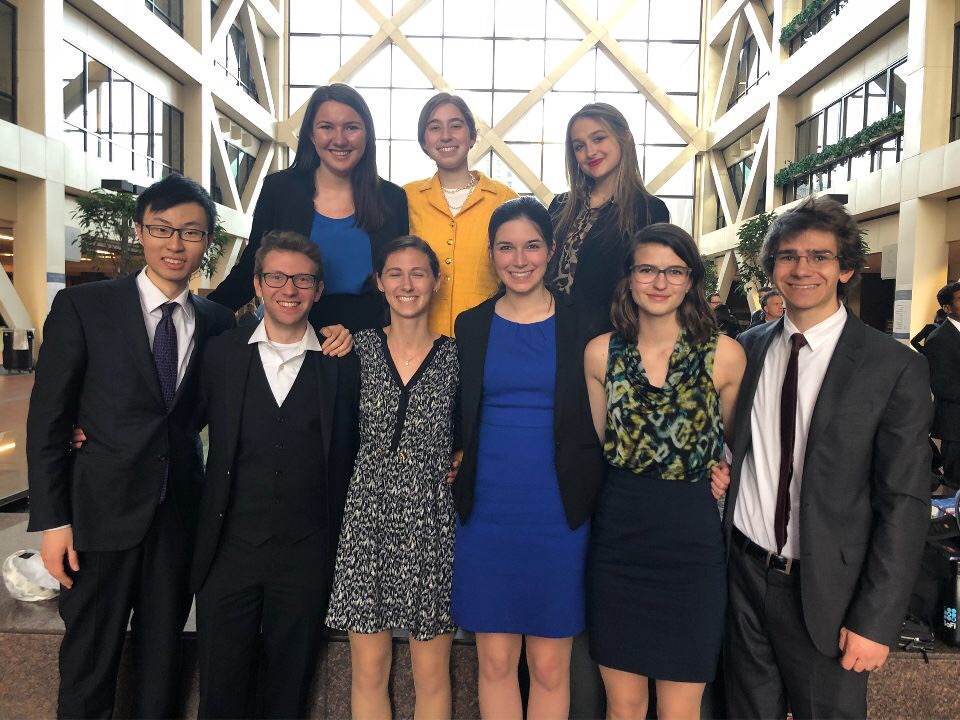 The mock trial team finished seventh in their division and twelfth overall against 48 teams at nationals. (Photo courtesy of Lisa Ackendorf)

Ranked last among 48 teams going into the national competition, the Lafayette Mock Trial team far surpassed expectations last weekend when they scored seventh in their division and twelfth overall.

The team competed in a series of four rounds against Northwood University, Patrick Henry, Cornell and Miami University of Ohio. While the team lost against Miami in the fourth round, they said they were both excited and proud to be there.

“We had no idea what to expect because we’d never been there. The tournament played to our strengths because we were good at adapting ourselves quickly. Because everyone had a new case there was not much time to prepare, [so] this worked [well for us],” Phoebe Silos ‘18 said.

Molly Fawcett ‘21, a witness for the team, additionally was named “All-American Witness,” an award given based on how the judges rank the witnesses in competition. They see how natural the witness performs and how they compare to members of their team as well as the other teams. Twelve people got witness awards in the entire division.

“My character was someone I’ve been doing all year and have been applying to different witnesses I’ve been playing. I played someone who likes to gossip. It was a fun witness who isn’t passionate about what’s happening in trial and doesn’t really care—[someone] just having fun with it,” Fawcett said.

“I think it went well because they want a witness who is natural. Because I’ve been playing this character all year, it just came to me. I had the mentality that [I’d] have fun with this. The judges noticed I was just a natural character based on [my] performance. If the acting seems forced or scripted, you don’t seem real. It’s really all acting based,” she added.

Throughout the whole year, the team has had only one case. For nationals, however, they were given a completely new case.

This gave little time for preparation compared to their first case in which they had months to practice. This, however, was something that worked well for the group.

“For some [teams], when the coaches tell them what to do and [have them] follow a certain script, those teams didn’t bounce back quickly [and were] thrown off. That wasn’t the case for us. The best teams are those who sound scripted when only thinking on the fly. This was a really good quality of our team,” Silos added.

Silos said she believes that the toughest part was “keeping calm when something unexpected happens. A lot of teams have crazy theories,” she said.

Coming in as the underdogs, the team members said they felt they had nothing to lose. The American Mock Trial Association (AMTA) Team Power Ranking ranked Lafayette 252 in the nation, giving them the lowest ranking of the 48 teams in the competition.

“Coming in, we were ranked last. No one thought we’d make it out of regionals or the Opening Round of Championships (ORCS), and now we’re at Nationals. And then we started winning, and people started recognizing us and rooting for us,” Tyler Schwartz ’18 said.

The team was mostly impressed with the kindness that the opponents showed them. There was “support from many teams. We were scouted by team coaches [and] people hoped we won,” Nick Contarino ‘18 said.

“We showed ourselves worthy and set the team in a [good place] for the future,” Contarino added.

The team does not believe they could have prepared any more than they did, and that sometimes, scoring is dependent on who is judging.

“It’s subjective and based on a 1-10 scale [depending] on how they think you did. Some like more theatrical performances, while others are real lawyers and want a more realistic one. Everyone has different preferences and you don’t know until you go there,” Schwartz said.

Going forward, the team will try to focus more on the performance aspect of the trial. “That’s how we improved so much this year and will continue to work on this for years to come,” Silos said.

They also hope to get more people for next year since many will be graduating or studying abroad.

“We want to continue to do well and [make sure] people have fun with it. I hope we don’t lose sight as a team of having fun and being friends,” Schwartz added.

Silos, who will be graduating in May, said she is “really proud of the team. Everyone put in their best effort and did best they could possibly do. They exceeded all of our expectations.”