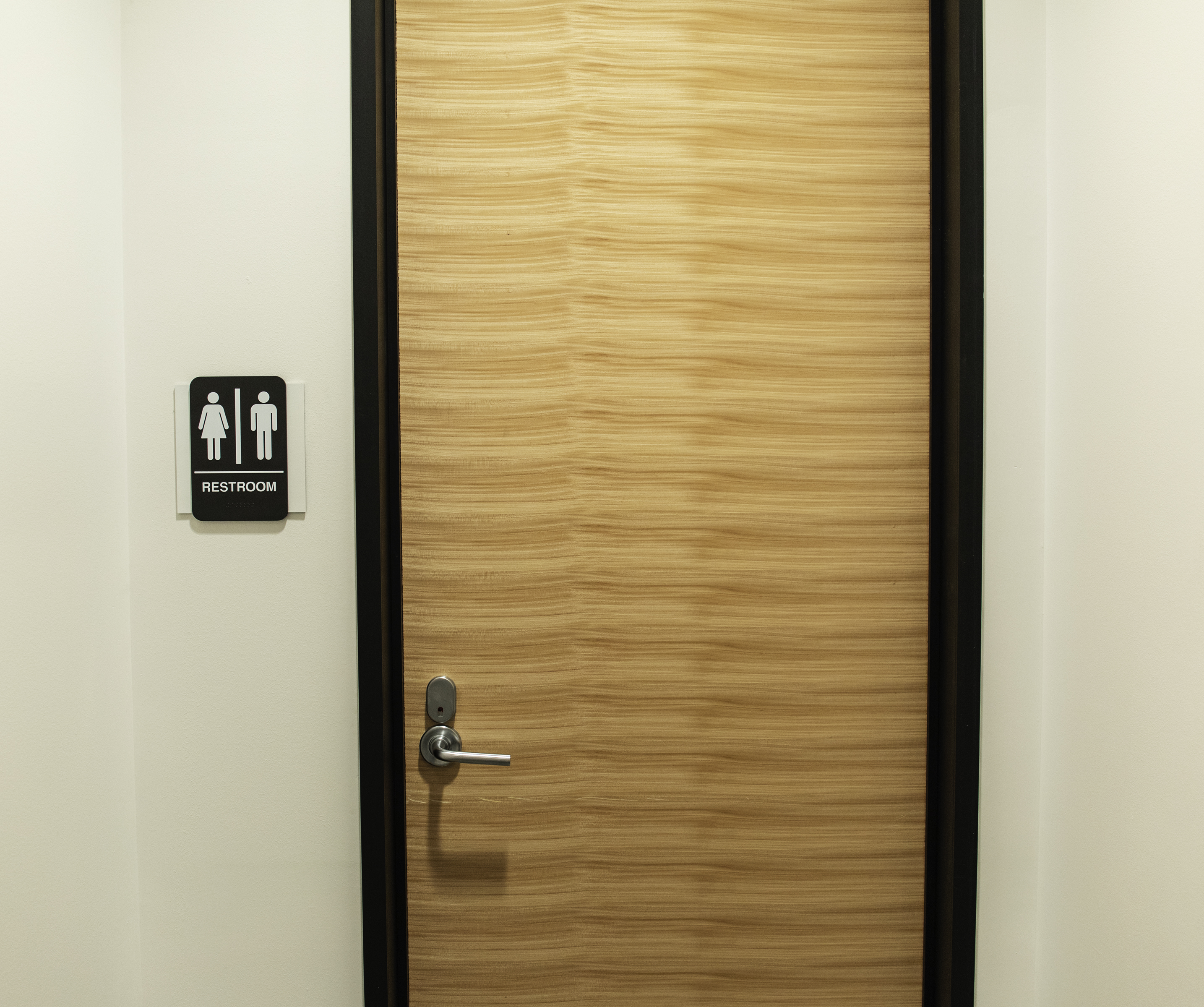 One of the initiatives of the Diversity Faculty Committee was the creation of gender neutral bathrooms across campus. (Photo by Elle Cox ’21)

From the new all-gender labeling of 50 bathrooms on campus to a small change in the wording of the faculty handbook, the Diversity Faculty Committee has been at work this semester to make Lafayette more inclusive of underrepresented groups.

Dean of Equity and Inclusion Chris Hunt said that the committee, which includes himself, has been working toward letting students put their preferred names on their student IDs, and on other college documents that don’t require legal names to be used.

Preferred name use has been a long sought-after goal, according to committee member and women’s and gender studies professor and chair Mary Armstrong.

“[Preferred name use] is a matter of real urgency and importance for our trans and non-binary community members and the issue has languished unaddressed and mired in bureaucracy for years,” she wrote in an email. “We are extremely proud to have worked together and made something FINALLY happen for students this year. It really took faculty and staff and the administration to move the mountain.”

Hunt said that by the fall, “members of the community will be able to have their preferred name on their Lafayette College ID…I think that’s pretty significant and pretty symbolic.”

The committee was chaired by Lijuan Xu, Libraries Instruction Coordinator. She had previously served on the committee two years prior and said that the next step to this change, which is meant to be more inclusive of the trans and genderqueer community, would be to use preferred names and expand beyond the binary gender system on the Banner database.

Banner, through which Banner Self-Service is operated, is “a huge database, and…one of the central record-keeping places. That’s how class rosters are generated, and…information is pulled from there [for the class Moodle sites]. For reporting purposes, information is coded, in terms of gender, female and male. We want to see changes made to that to accommodate other types of [gender], not just binary coding,” Xu said.

“We want to see if there’s any way students could eventually have preferred names recorded in Banner, so when it feeds into class sites, and professors get a list of the class roster, students’ preferred names will be there already so you don’t have to keep asking students for their preferred name,” she said. “Once all the information is nicely in place, when there’s any form of communication, the person will be addressed in the appropriate way, especially when it comes to transgender or genderqueer.”

Outside help was brought in to adequately assess bathroom designation on campus. A private architect firm, ALMA Architecture, has been assessing single-use bathrooms while putting up the new all-gender signage, Hunt added.

Trisha Agarwal ’20 and Nina Milligan ’20 were selected by student government to serve as student representatives on the committee, which included faculty members as well. Agarwal wrote in an email that she is proud of the work the committee has done over the course of the last year.

“The sense I get is that the faculty diversity committee has not taken many concrete steps in the past, so I feel good about the progress we made,” she wrote.

Milligan said that she is proud of the work the committee has done to make Lafayette more inclusive of transgender and genderqueer individuals.

Xu said that the committee reached out to President Alison Byerly to get the word out to campus more about these initiatives and accomplishments.

Dean of the Faculty Robin Rinehart said that the committee has also been working on improving the diversity of the faculty, which has increased over the last three years. In 2015, 15% of faculty were non-Caucasian, and that number stands at 17% as of now. In 2015, 36% of overall faculty were female, and currently the number is 39%.

She said that to enact this change, search committees for faculty have been trained on “unconscious bias” workshops which she has been leading “for the last three years.”

Rinehart added that the committee made a small change in the wording of the faculty handbook to be more inclusive, changing one mention of “minority” to “underrepresented.”

“[The handbook] talked about efforts to recruit women and minorities, and we changed that to women faculty and faculty from underrepresented groups to be more inclusive, more accurate,” she said. She said that it is “better terminology” to use the word underrepresented.

The committee will be releasing their final report at the faculty meeting to be held later in May.

“[With any committee], the report will just say how many meetings they had, who’s on the committee and what they did,” Rinehart said.

This is great! I’ve wondered about the names use thing.