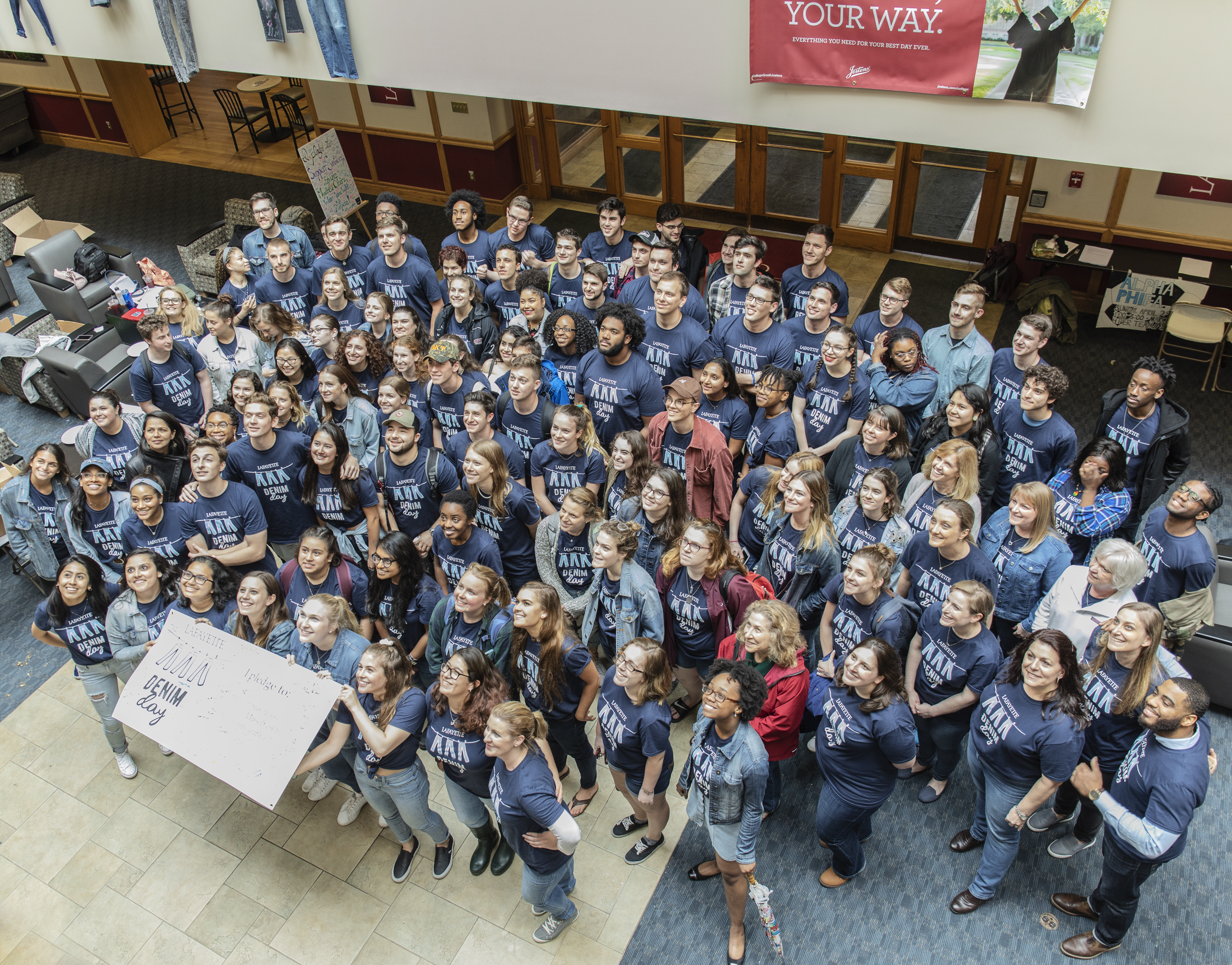 Students, faculty and staff participated in Denim Day on Wednesday, as an effort to band campus together to spread awareness and raise support for victims of sexual violence.

Denim Day is a national day organized by Peace Over Violence where individuals “wear jeans with a purpose, support survivors, and educate yourself and others about sexual assault,” according to the organization’s official website.  The day began 19 years ago as a form of protest to a court ruling in Italy.

The Italian Supreme Court overturned a rape conviction because “the justices felt that since the victim was wearing tight jeans she must have helped her rapist remove her jeans, thereby implying consent. The following day, the women in the Italian Parliament came to work wearing jeans in solidarity with the victim,” the website reads.

This is the first year that Lafayette has participated in Denim Day, but sexual violence awareness programming is not new to campus. As Jessica Brown, the Educational Equity Coordinator, explained in an email, “My office is working to provide educational opportunities for the campus regarding sexual misconduct prevention.” This has included the One Love Escalation Workshops that have been running all semester, as well as education events coordinated by Pards Against Sexual Assault (PASA) who also helped organize denim day.

During the day on Wednesday, there was a petition in Farinon for students to sign which stated, “I pledge to Support Survivors, Educate Myself and Others, Wear Jeans with a Purpose.” Educational pamphlets and t-shirts to show support were available as well. By the afternoon, there were no shirts left.

In addition to these features of Denim Day, a denim drive has been taking place in Farinon for the last two weeks. Reeve Lanigan ’19, the president of PASA, explained this drive benefits “the Kristi House in Miami where the ASB trip went this past spring. The Kristi House is an organization that helps victims of childhood sex abuse and sex trafficking through various resources including treatment, after school programming, advocacy and coordination of services.”

Amanda Baildon ’19, the president of the Panhellenic council, said that Greek life on campus also wanted to be involved in Denim Day because “with everything that’s going on on this campus…it’s easy for certain things to get swept under the rug,” she said. “I think it’s going to be really awesome to see [Denim Day happen].”

She and Nick Mastria ’19, president of the Interfraternity Council coordinated with Dan Ayala, Advisor to Fraternities and Sororities, to buy denim day shirts and wear them to show their support for this cause.

Brown explained that as a follow-up to the day, the Educational Equity Office, PASA and Quest planned to host a Title IX Panel on Thursday to answer “questions students may have and provide more clarity regarding Lafayette’s policies and procedures.”