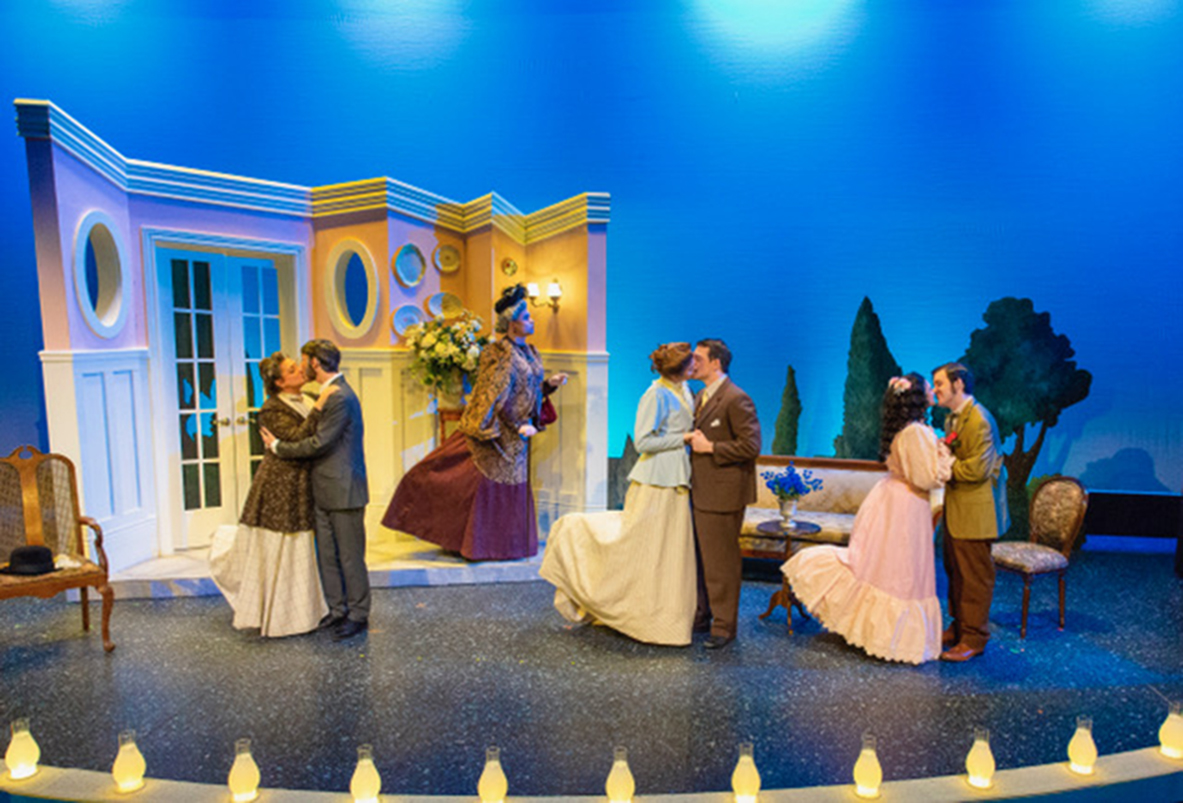 Lafayette’s production of “The Importance of Being Earnest” excels because of the cast’s chemistry with one another. (Photo courtesy of Will Choea)

The cast of “The Importance of Being Earnest” managed to exceed expectations this past weekend and put on a superb show of a century-old comedy, written by Oscar Wilde.

The play was first performed in 1895 and is the second-most quoted English play after Shakespeare’s Hamlet, according to the show’s program. It will be shown in Buck Hall this week as well, Thursday and Friday at 7:30 pm and Saturday at 2:00pm.

The theater department’s showing of the play features an experienced cast. With four of the nine cast members being graduating seniors, the production takes a traditional approach to Wilde’s play and ensures familiarity to those who have previously seen this play elsewhere.

Out of the cast, Ethan Simmons ‘18 (Jack Worthing) and Brian Brundage ‘18 (Algernon Moncrieff) showed outstanding cooperation with each other through their on-stage interactions and an in-depth understanding of their characters.

In order for the two best friends to secure the loves of their lives, they both took on the name of Earnest because of the women’s love for that name. Simmons and Brundage took on the difficult task of portraying those characters, who were two distinct characters with a similar backstory. They excelled in their roles and clearly presented two individuals, which made their every interaction all the more hilarious.

Chris Melka ’18 performed a memorable rendition of the formidable Lady Bracknell. It was a surprise to see a male playing Lady Bracknell because just when the audience expected a small, skinny woman to make an appearance, Melka, who is over six feet tall, walked onto the stage.

According to the production director and theater professor Michael O’Neill, he made the decision of casting a male for a female character, because “he was the best actor who auditioned for the role. It helps that physically, he is bigger than the rest of the actors.”

The play is definitely funnier when Melka is on stage, with his intentionally awkward feminine voice and gestures, Melka makes the perfect Lady Bracknell who is scary yet funny.

The female leads, Natalie Sampsell ’20 (Gwendolyn) and Olivia Coughlin ‘20 (Cecily) also have good on-stage interactions. They shone especially bright when the two were the main focus of the third act.

Coughlin and Sampsell nail the process of sudden transformation from nemesis to sisters in a matter of minutes, which was entertaining to watch.