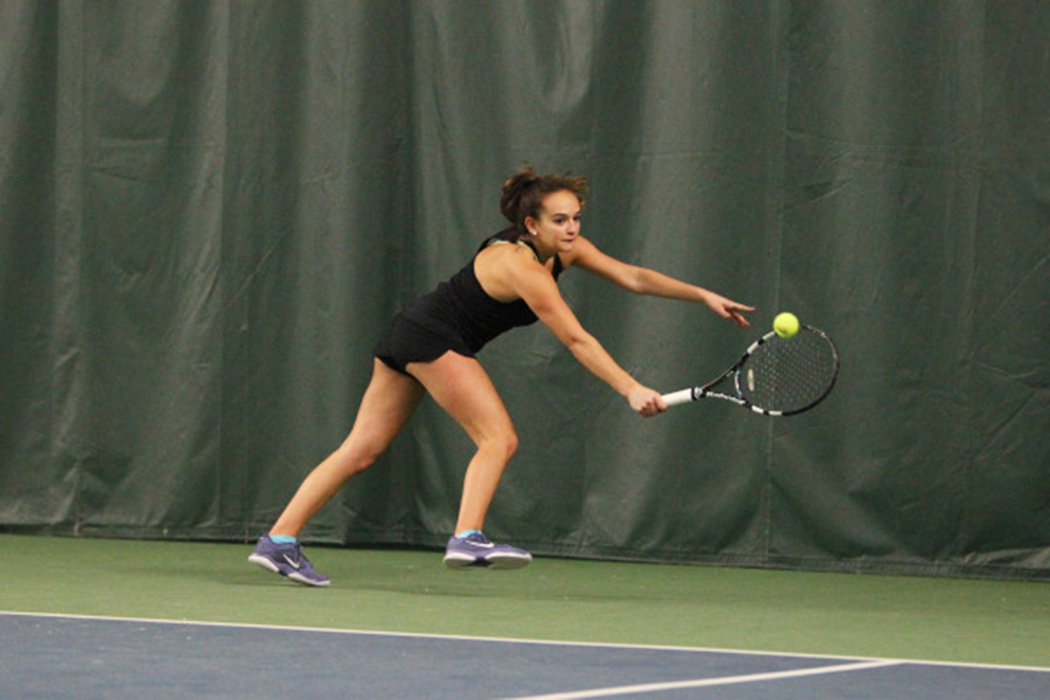 Meredith Block ’20 won both of her singles and doubles matches against Colgate. (Photo courtesy of Athletic Communications)

For the first time in 20 years, Lafayette’s women’s tennis took down Colgate on Saturday, April 14. It ended up a narrow 4-3 victory with Lafayette victorious in doubles and the teams splitting the singles matches. Colgate and Lafayette play each other regularly as members of the Patriot League.

The doubles teams of freshmen Cece Lesnick and Samantha Snyder, and sophomores Grace Conrad and Block won their matches to secure the doubles point.

“The biggest strength [of the team] was that we got better in doubles as the season went on,” Conrad said. “It was really important that we got the doubles point because it won us the match.”

The team went into singles matches leading 1-0, but the win gave the team more than just a point on the scoreboard.

“It’s more of a momentum booster,” Lesnick said. “After you finish doubles, it’s a restart with singles, but we go in knowing we beat them in doubles so we can compete with them. It’s a lot of confidence and momentum.”

“Overall, the team had so much spirit going into the singles matches,” Lesnick added. “We were all cheering for each other and the environment was so good. A lot of friends and families came out to watch.”

With no men’s games going on, the courts were all free for the singles matches to begin. Freshman Alexa Cook and Block picked up singles wins before Conrad earned the fourth point with her win, clinching the match for the Leopards.

“I didn’t think of it as I was clinching it, I wasn’t really focused on the clinching part,” Conrad said. “I was in front of the scoreboard and could see that Meredith and Alexa were winning, and so I knew to keep up the pressure. I did know I was clinching it, but it didn’t set in until it was match point.”

Conrad said she was locked in as she finished off her opponent.

“I was very determined against Colgate,” she said. “I was not going to lose.”

The score was 4-1 at the point when Conrad secured the victory, when the Leopards broke a two decades-long streak of losses to Colgate.

“We knew that it was pretty long ago, at least 4 or 7 [years since we beat Colgate],” Conrad said. “I was assuming lower than 10, but I wasn’t super surprised by how long it’s been, but that made it that much better. We got so much support from other athletes and everyone in general. Most people knew about it. Later on Saturday people were outside congratulating us.”

According to Lesnick, the team was looking forward to this match all season.

“We were all unbelievably excited [about the win],” she said. “From a while ago, we knew this was a big match. When the schedule came out, we could see that the last match against Colgate was big. The whole team was excited for that, more than other matches.”

Conrad said the team was happy to see members of the Lafayette community attend.

“The girls on the court were putting in a big effort, but everyone watching was so amazed by what happened,” Conrad said. “All the fans and the alumni who came back, they were amazed. The alumni were amazed because they knew what the experience was like, playing Colgate. How close it could be, but it hasn’t been [in previous matches].”

Block was recognized as an honorable mention for the Patriot League Player of the Week award after a string of dominant performances.

“I was really excited and honored to have been noticed by Patriot Leagues,” she wrote in an email. “I have won doubles and singles in the past four matches against Loyola Maryland, Coppin State University, Sacred Heart University and Colgate University, so it was really nice to see my hard work be recognized.”

With the first round bye, the Leopards will face the #2-seeded Army on Friday, April 20, at West Point.

“It’s really nice [to have the bye],” Conrad said. “Especially not having to miss school, but it gives us more confidence for the next years to come. I don’t think it affects us this Patriot League because we have to play the #2-seed, but it’s nice not to have to qualify and prove ourselves.”

As an underdog, the nothing-to-lose mentality could be working in favor of the Leopards on Friday, Conrad said.

“It’s a really good thing,” Conrad said. “It’s one of the best mentalities to have, because with Colgate we kind of did that. We’ve never beaten them before, but we were confident in ourselves. With Army, it’s more about having fun because I think they’re a fun team to play. If you go into tennis with that type of mentality, you don’t get as nervous.”