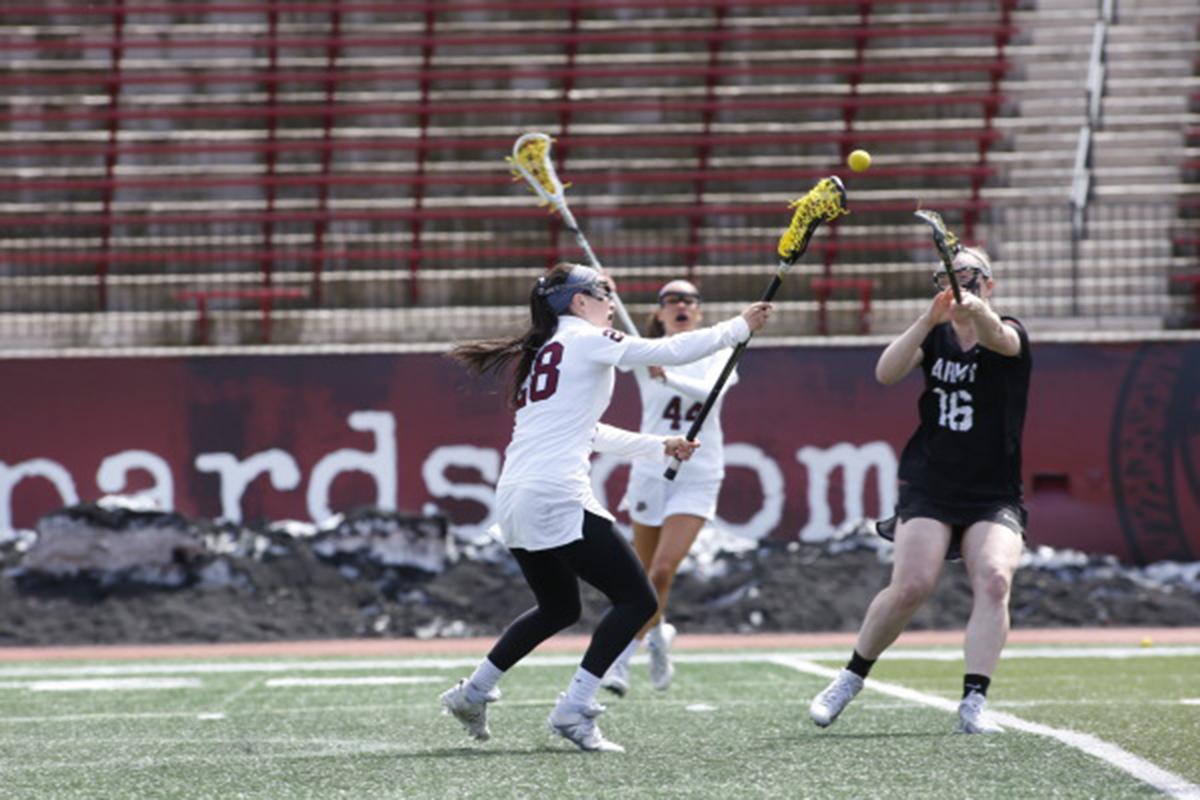 Women’s lacrosse hosted Army on Saturday, finishing the game with a close 12-11 loss. Although the Leopards controlled the majority of the game, they were unable to hold the lead in the final minutes of the game.

“Winning Patriot League games is becoming more crucial as we’re nearing the Patriot League Tournament,” junior attacker Jane Kirby said. “We want to finish on top and feel like we’ve improved since the start of the season.”

The Leopards came out strong, earning a 6-3 lead by the second half. Lafayette kept control at the start of the second half, being up 8-3 with 27:22 minutes of play remaining.

“We had a big momentum going into Army after Bucknell and Rutgers, which helped us in the first half,” Kirby said. “We were putting our shots away, communicating well and just pushed for the first half.”

The Leopards gave a strong defensive effort, particularly in the first half. The Black Knights only managed to score 3 in the first 30 minutes of play.

“They were tough and aggressive on the field, but we did a good job preparing ourselves by setting up Rutgers, a similar team, the week before,” Kirby said. “The game helped us mentally and physically prepare to face Army.”

The Black Knights began to close on the Leopards in the final 15 minutes of the game, scoring six times in a row to bridge the score gap. Army dominated the circle and kept possession of the ball in the second half, leading 10-5 in draw control.

“Once they started to go on a run with two or three goals, the momentum shifted,” Kirby said.

The Black Knights took the lead, 9-8, for the first time during the game with 13:09 left in the game. The Leopards responded, with freshman attacker Anna Stein and senior midfielder Kristin Schaen scoring two of the next three goals, tying up the game 10-10.

“Because we’re a younger team, I think we struggle with being in uncomfortable situations,” Kirby said. “When we started to lose control in the second half, it led to a downward spiral with some units on the field.”

Army came back with two more goals, while the Leopards could only manage to score one more goal before the clock ran out.

“We had goals in our mind going into the game, each had to do with a different unit on the field. We succeeded with our goals in the first half, but it started to slip away in the second half.”

Schaen lead the team in goals, scoring four for the Leopards. Kirby was right behind her with three goals, after recently scoring her 100th career goal in the week prior.

“Every other player on the offensive unit, and really everywhere on the field, and my coaches have been helpful with pushing me to this level and putting me in positions to be successful,” Kirby said.

“I think our disappointment with the result from Army will give us some fire going into the Loyola game,” Kirby said. “ “We’re just going to keep building on things and fixing things.”