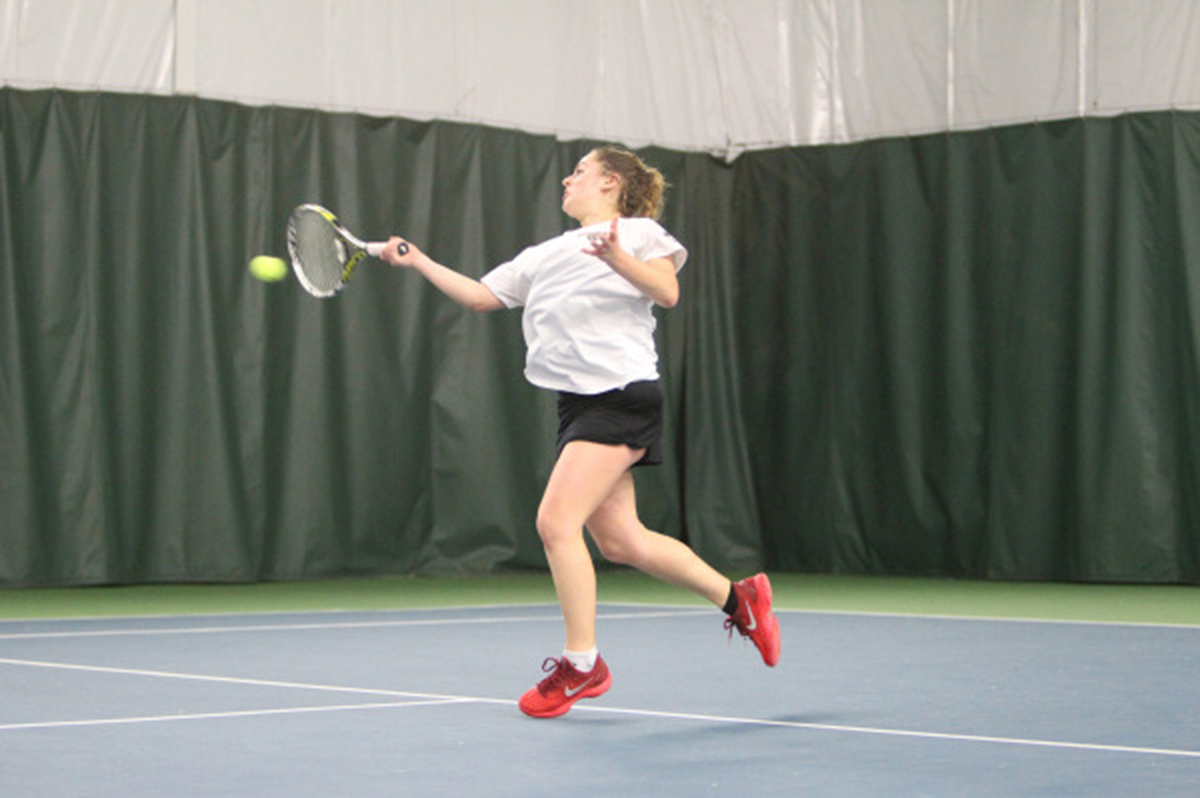 This week, The Lafayette sits down with the #1 singles player and first team doubles player for women’s tennis, freshman Cece Lesnick.

AJ Traub: You’re in the #1 spot in both singles and doubles. How is it to take on that role in your freshman year?

Cece Lesnick: It’s a lot of pressure, but it’s exciting because there’s not many expectations. I know if I go out there and do my best, my teammates will be proud of me. It’s exciting. I get to play really good players.

AT: You’ve been performing well in doubles with fellow freshman Samantha Snyder. How have you developed teammate chemistry so far?

CL: It’s been going so well. We actually had match points against the #1 team from Bucknell and the #1 team at Loyola, and we were beating Army and then it clinched. Sammy and I work amazing together and we know that if we stay together all four years, there’s nothing but the highest possibilities. We’re really good at supporting each other, especially during the matches. She’s one of my best friends off the court.

AT: How has your performance compared to your expectations coming in?

CL: Not quite my expectations, but I think it’s hard to meet my expectations for tennis when I’m also trying to do well in school, since I have high expectations in school too. It’s a lot going on. Overall, I’ve had a couple good wins that I’ve felt good about and I’ve definitely fought hard in all the matches.

AT: The team overall is on the younger side. How does that affect the team dynamic?

CL: We might not have as much experience as other teams, but it causes us to want to work hard. We know we’re going to be together for four years and we know how far we can go.

AT: How is it, knowing everyone on the team will return next season?

AT: Why did you choose to play tennis at Lafayette?

CL: I fell in love with the campus. I wanted a place where I could focus equally on academics and tennis because school is really important to me. Also, I love our head coach Ralph Van Ormer, and I really wanted to play for him.

AT: What is your favorite part of being on the tennis team at Lafayette?

CL: Just to know I have a group of girls who will always be there for me. It’s somewhere I can escape the college life and do what I love.

AT: What is the strongest part of your game?

CL: In doubles it’s my volleys. I like to really go for it in doubles. In singles, it’s probably my slice and my inside-out forehand.

AT: You played softball and squash in high school as well, do you find it helped you with your tennis game?

CL: It was more like [playing] tennis helped [with softball and squash] than they helped [my] tennis [game]. It was important to me my senior year to try more sports because I’d played tennis all my life. I wanted to try out new things but it made me realize that tennis is my favorite.

AT: What is your proudest athletic achievement so far?

CL: I was the National High School Sportsmanship Award winner from the New Balance High School Nationals. That was really important for me and probably the proudest my parents have ever been.

AT: How was it to play in tournaments with your mom in doubles?

CL: My mom is super competitive, but it was so fun. I get very proud of my mom, and we have a lot of fun together, and my grandma came and my dad came. We beat her high school rival and it was a huge deal. She’s assistant coach at Seton Hall with their women’s team, so she knows how to talk to players and calm them down, so she helps me when we’re playing. She’s been my coach since we moved to New Jersey because she’s really good at supporting me and giving me advice.

AT: What’s your favorite sports team?

CL: The Patriots by far.

CL: I went to two middle schools and three high schools before Lafayette.