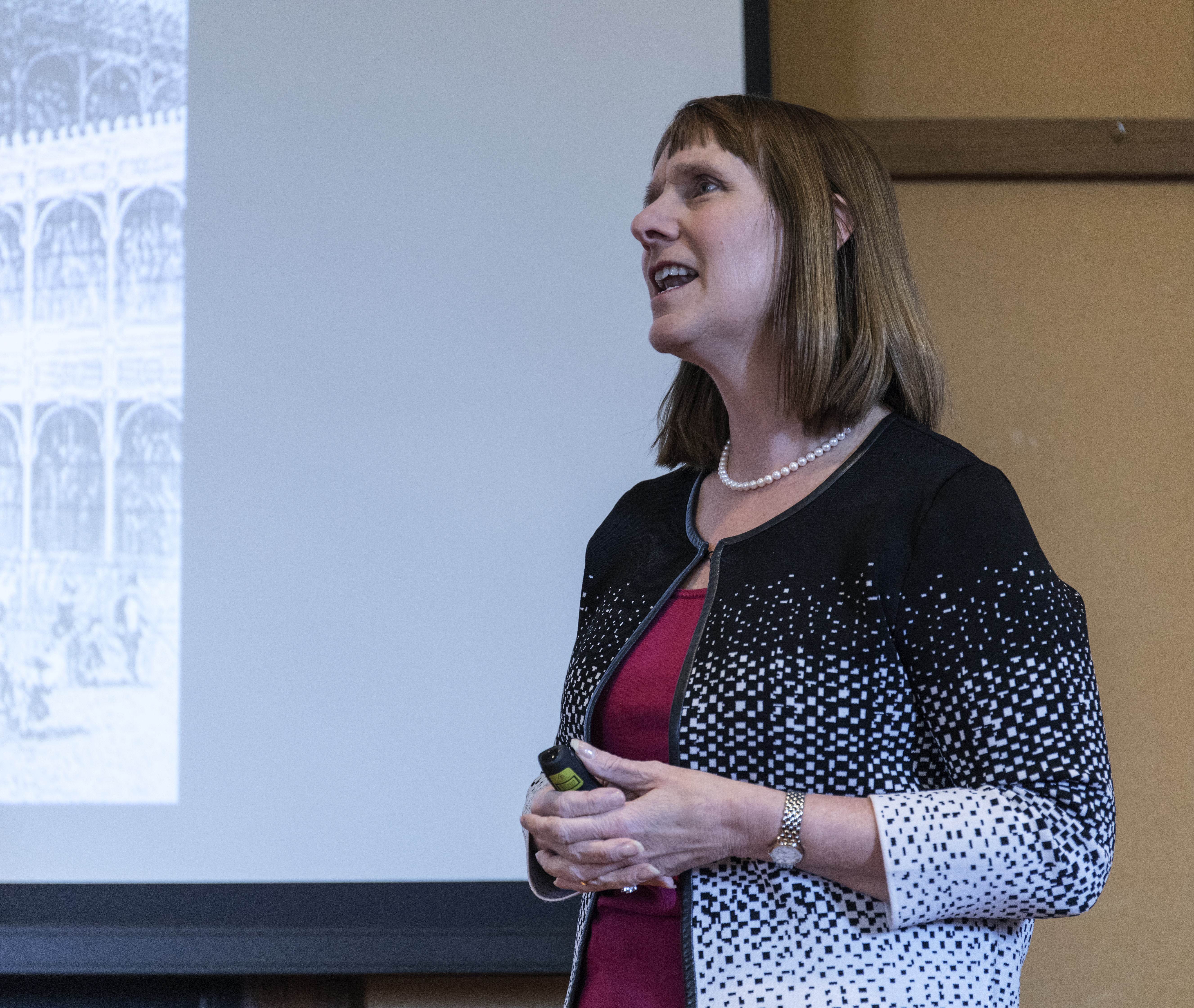 “The nature of humanistic inquiry has changed due to the impact of technology,” President Byerly said during her talk. Photo by Elle Cox ’21

Most may think of virtual reality as a new concept—a futuristic, novel idea routed in gaming and technology. That wasn’t so in the Victorian era, as President Alison Byerly discussed in her talk on Tuesday.

Byerly majored in English at Wellesley College and received her master’s and Ph.D. in the subject at University of Pennsylvania. She’s also written two books on the matter: “Are We There Yet? Virtual Travel and Victorian Realism,” published in 2012, and “Realism, Representation, and the Arts in Nineteenth-Century Literature,” published in 1997.

Virtual reality was artistic, with huge panoramas enabling the viewer to immerse himself or herself into the realm of the painting, Byerly said, adding this virtual reality through art represents a larger theme of the interconnection between the arts and the sciences during the Victorian era.

She noted that the distinction between engineering and the arts, in particular, did not always exist. Engineering, even today, designs for aesthetic appeal in many cases, and the Latin root of the word, “ingeniare,” translates into “to design.”

She drew parallels between that interconnectedness to today’s field of digital humanities. Over time after the Victorian era, the fields of science and technology drew a sharp distinction from the arts and humanities. She pointed out how the very existence of the term “digital humanities” shows how the two clash—if the two were as interconnected as they once were, there wouldn’t be a need to describe a whole new field in that way.

“The nature of humanistic inquiry has changed due to the impact of technology,” she said.

“One of the things that I have liked about the Victorian conception of the relationship between these fields is that before fields had really crystallized into separate disciplines with their own separate P.h.D. programs, there was a much broader and more interdisciplinary sense of the ways in which they connected with each other,” she said. “As we have evolved our own specializations, it has been very easy to lose sight of those interconnections.”

As trains made their way throughout Britain, their speed and technology amazed, while also being a sort of culture shock, Byerly said. When train tunnels were built, there was a demand for them to look aesthetically appealing, she added.

“If you wanted people to accept a huge railway tunnel in a beautiful little country town, it had to be a really nice railway tunnel. It had to have something to it that would make [the village] proud [to have it],” Byerly said. “The sense in which these things were intruding into the culture meant that they were held to a higher standard of having to justify themselves aesthetically.”

Byerly also discussed the evolution of communication during this era, in which the telegram developed. The rapidity of getting a message across with telegrams amazed people at the time, as did the speed of trains.

Charging by the word, telegraphy made it expensive for upper classes to maintain their etiquette when communicating, but they did so anyway.

English professor Chris Phillips asked Byerly if “among the other concerns about instability…is there a concern about loss of civility, or loss of decorum.” Byerly said this was absolutely a concern, as significant messages were hard to convey in such short messages as telegrams allowed for pricing.