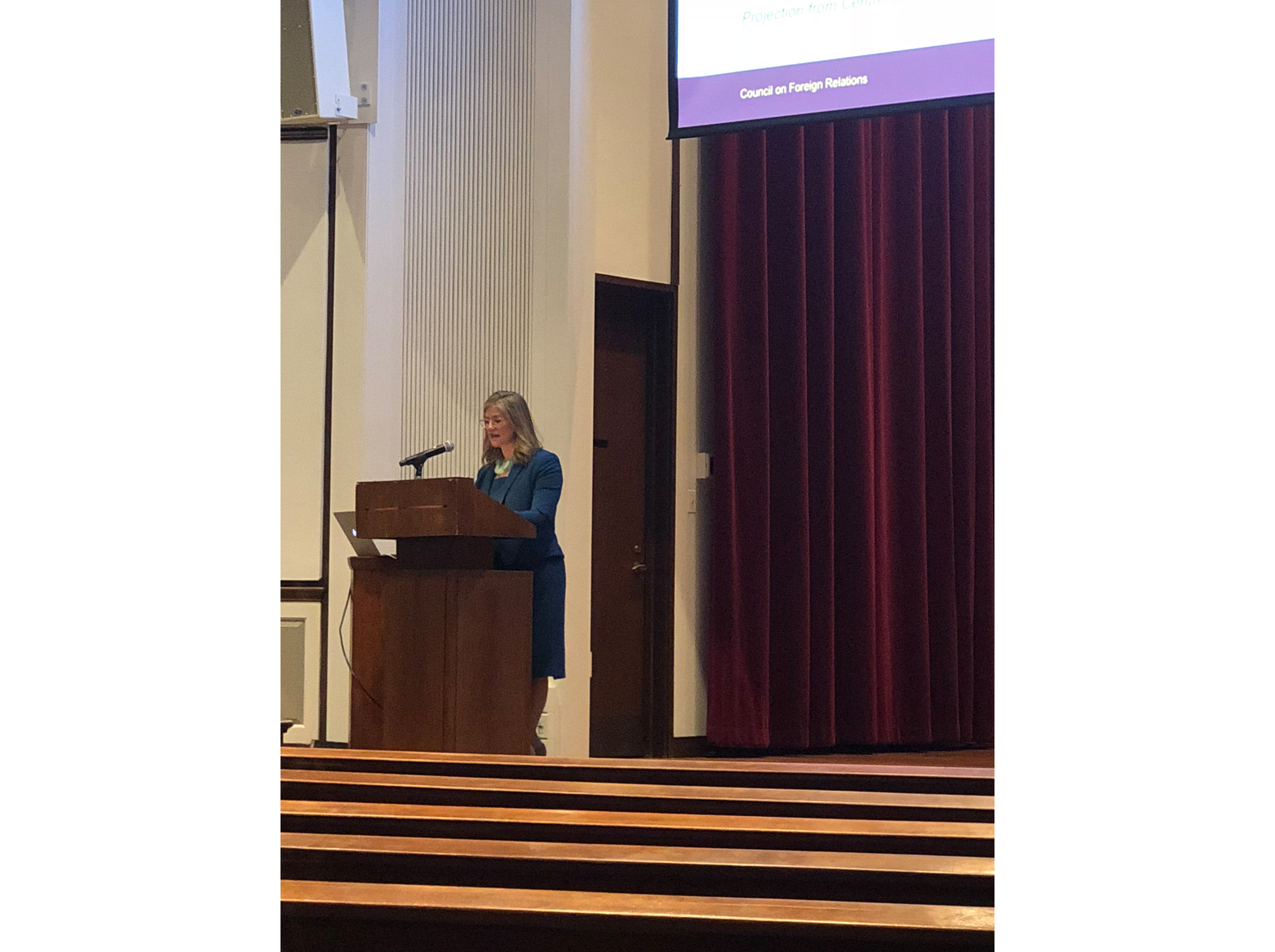 Alyssa Ayres, Senior Fellow for India, Pakistan, and South Asia at the Council of Foreign Relations, was this years speaker for the annual Pastor Lecture. Photo by Caroline Nawrocki ’18

As U.S. relations with countries overseas grow more tense, with China in particular, Alyssa Ayres—Senior Fellow for India, Pakistan, and South Asia at the Council of Foreign Relations—stressed the growing importance and prominence of India in the global political economy that is often overlooked.

Ayres, who is also the director for U.S. Relations with the South Asia Roundtable series and a contributor to Forbes, was this year’s Pastor Lecture speaker for the international affairs department this past Monday.

She opened by first asking the audience who has studied abroad in India, to which only a few hands raised, and then additionally what people usually thought of when they thought of India.

When Ayres asks this question, she usually gets answers surrounding poverty and dense populations. After displaying several statistics on India’s growth, Ayres discussed India’s journey alongside globalization, New Delhi’s place on the global stage and the struggles it continues to face.

“Twenty-one percent of people still live in extreme poverty living on less than $2 per day, which equates to 262 million people—the world’s largest number of poor people,” Ayres said. She also shares that while many improvements have been made, “half of Indian village homes lack toilets, although this is an improvement.”

India faces many social challenges as well, such as “gender bias and violence against women.” India is facing a declining participation work rate among women. By closing the gender gap in the workforce, this “could increase GDP by $700 million by 2025.” In addition, “religious strife continues as do caste divisions.”

Despite these vulnerabilities, India has emerged as a global power, as its “time has come,” Ayres said.

Ayres stated that its “GDP has surpassed those of Italy and Canada, and the Indian economy may overtake those of the UK and France in 2018. This would make India the world’s 5th largest economy.”

In addition to its rising GDP, India’s growing youth population contrasts with several more developed nations such as Japan and Germany, which also indicates a growing work force. Additionally, India is growing in military power and technology and is working to strengthen its defense capabilities.

As any leader, India displays confidence, she said. It has become more confident in reshaping global events. Climate change, for example, is an issue that India has taken a lead in helping instead of “playing the defense like it did less than a decade [ago].”

India has developed multiple projects and partnerships in recent years. The country created the “International Solar Alliance in partnership with France in 2015.” It has become a “real institution with a full calendar of consultations.”

India has worked in helping many countries as well. India is even referred to as the “net provider of regional security.” Ayres shares that “India took the lead to save foreign citizens in Yemen after their government collapsed.”

Ayres said she believes that as India leaves behind some of its defensiveness behind as it works to improve itself, the US should do the same and make advancements. In terms of working with each other, she says both countries should “see each other as strategic partners and as alliances and should work [together].”

Despite economic frictions, Ayres believes that “Washington can make a difference by helping India gain entrance to global institutions and the US should do a better job of including India.” She says now is the time for India to be recognized among other countries and leave “decades of its small economy blocking them out of joining institutions” in the past.

Not only is the spread of India an issue in political and economic terms, but also in educational and cultural terms. Ayres cited the lack of students who study abroad in India or who choose to learn any South Asian language.

“Despite the growth of the Indian economy, we could be doing better in promoting South Asian education in higher institutions. Shouldn’t India have the same visibility [as other countries]?”

“There needs to be more opportunities to learn about India. Students should have a deeper knowledge of a country that is having more of an impact in the world today,” she said.

One student asked why the U.S. sees a large number of immigrants from India and if there are a lack of opportunities in India because of globalization. She responded by explaining that “many Indians are working in the U.S., but the immigration system [in the U.S.] has made it difficult for reform.”

She added that “people study in the U.S. and get an MBA but decide to create a startup in India due to its booming economy. They feel they can make a difference. There are opportunities now that didn’t exist 20 years ago.”

Another student asked about Pakistan and its “backlash.” Ayres expressed her concern for the country, and its inability to provide benefits for its own citizens. She does not know what will happen as the U.S. relationship with India continues and she expressed worry for this.

John McSparron ‘18 said he felt Ayres provided well-rounded insight into the country and its new role in the global arena.