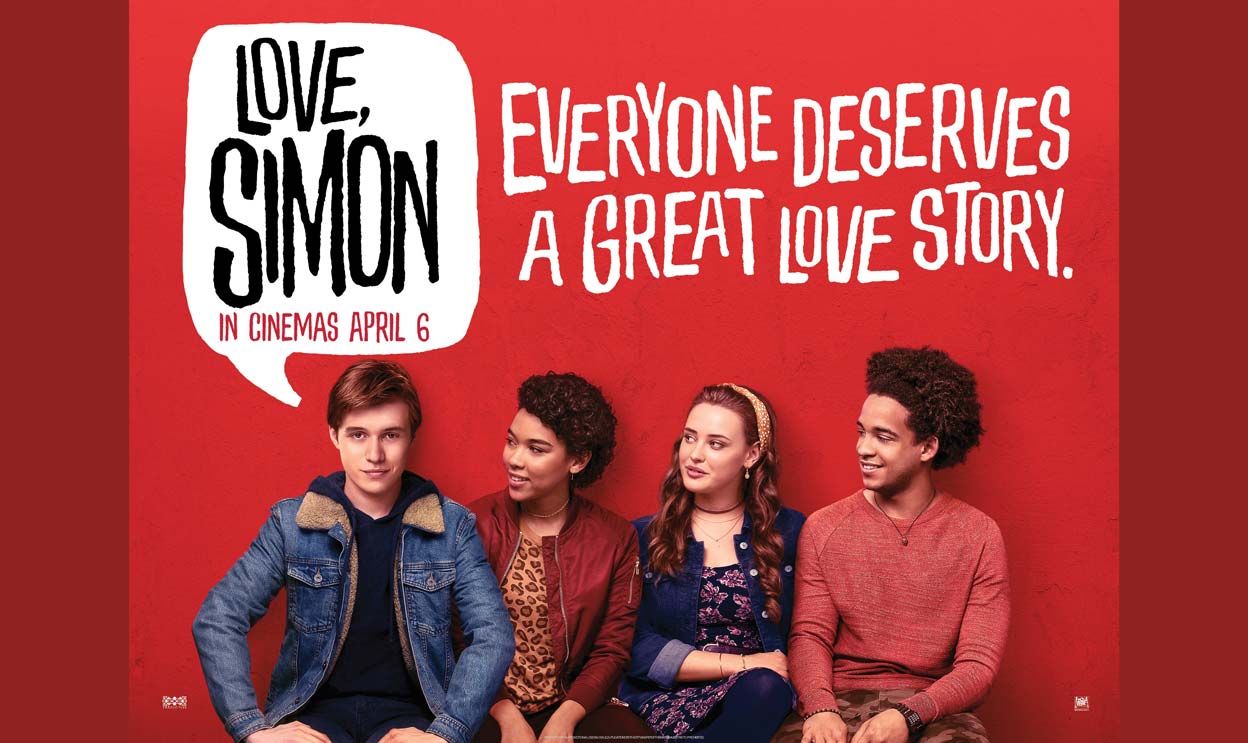 “Love, Simon” is a much-needed LGBT rom-com with happy themes, something that has been missing in the genre. (Photo courtesy of Study Breaks Magazine)

“Love, Simon,” a recent coming-of-age movie, centers around gay teen, Simon Spier. It is the perfect mix of cheesy lines, friendship, romance, conflict and identity issues that one might encounter in their favorite CW show (which makes sense considering the director of “Love, Simon,” Greg Berlanti, is the producer of seven CW shows).

“Love, Simon” is a groundbreaking movie for LGBT representation on the big screen, and is the only movie featuring a gay teen as the lead to be backed by a major studio. The movie excels at providing an LGBT narrative that is relatable in this day and age and–spoiler alert–actually has a happy ending, something that is usually lacking from LGBT narratives.

“Love, Simon” is based on the best-selling young-adult novel, “Simon vs. The Homo Sapiens Agenda,” by Becky Albertalli, and follows the journey of Simon Spier, portrayed by Nick Robinson, as he navigates being in the closet while also forming an online relationship with another gay classmate who goes by the pseudonym, Blue.

Simon spends the movie trying to determine Blue’s identity. We were provided with that imagery when the voices and characters of the narrator of Blue’s emails changed based on who Simon thought Blue was.

However, while Simon is corresponding with Blue via email on a library computer, he leaves the computer open and a classmate uses this to blackmail him in order to gain favor with the girl he likes, one of Simon’s best friends.

Simon must deal with the consequences of this and does so in typical young-adult movie fashion. Like Simon said during the introduction of the movie, he is “just like you.” The message that Simon is just like the viewer is shown throughout the movie with Simon’s sexuality not being a defining characteristic of his identity, but simply another thing he must navigate along with school, family, and of course, relationships.

“Love, Simon” stars a remarkable cast of actors such as Jennifer Garner and Josh Duhamel, who play Simon’s parents, as well as many famous young Hollywood faces, including: Katherine Langford ( from “13 Reasons Why“) as Simon’s best friend, Keiynan Lonsdale (“The Flash”) as Leah, in addition to Alexandra Shipp (“X-Men: Apocalypse”) and Miles Heizer (“13 Reasons Why”).

In addition to these characters, two of the best performances can be attributed to Tony Hale who plays the vice principal, Mr. Worth, and Natasha Rothwell, who plays the theater teacher, Ms. Albright. Both of these characters add comic relief to “Love, Simon” and remind you that the movie is, in fact, a comedy, despite the circumstances under which Simon finds himself.

“Love, Simon” might not have the same critical acclaim as other movies with LGBT protagonists, such as the award-winning “Call Me by Your Name,” but what it lacks in cinematic masterpiece it makes up for in being a box-office hit and an unashamed romantic comedy, therefore making it more accessible.

“Love, Simon” was produced by 20th Century Fox, which boasts other popular young adult films such as “Paper Towns” and “Maze Runner,” making it a perfect candidate for wide-release, allowing movie-goers in even the most remote cities a chance to see a great representation of LGBT characters.

Overall, “Love, Simon” is a wonderful young-adult coming of age film that is indicative of a trend towards better queer representations in film.

It would be remiss to say Simon is the example of most queer experiences, considering Simon is an upper-middle-class, white male, it is still a great start.

The movie also provides representation beyond being LGBT, with five of the predominant cast members being people of color.

It is clear that Hollywood is shifting its focus beyond a straight, white audience, and “Love, Simon” is proof that this approach is working, making it not only a great romantic comedy to see but a culturally significant film for years to come.