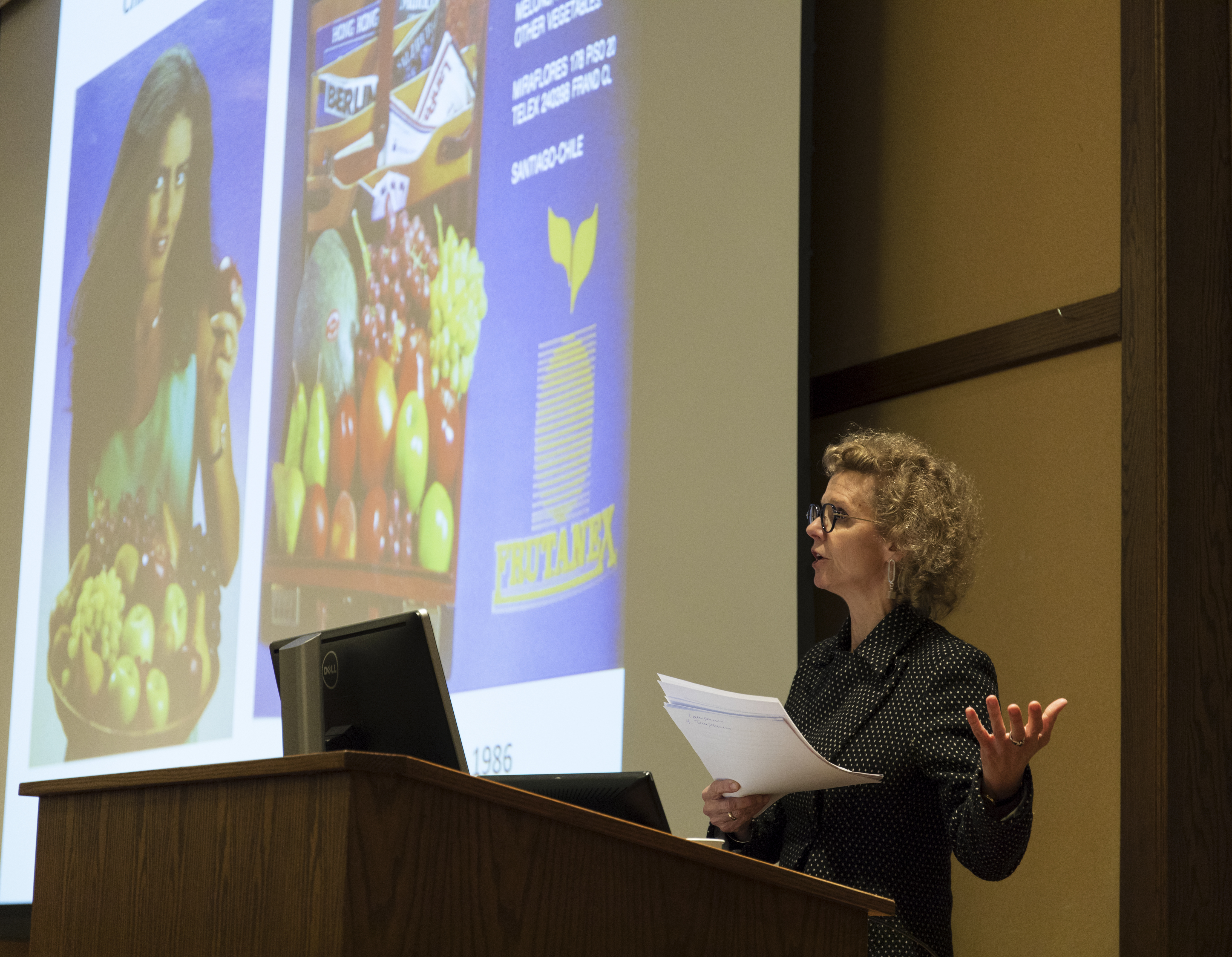 Heidi Tinsman discussed the positive and negative effects of US grape consumption on Chile. Photo by Elle Cox ’21

The phrase “farm-to-table” takes a different meaning when the farm is hundreds of miles away in South America.

According to Heidi Tinsman, increased grape consumption in the US over the last several decades has had both negative and positive outcomes on workers’ rights and female monetary independence.

Tinsman, professor of history at the University of California, Irvine, was the 2018 Richard Welch Lecture speaker. Her talk, “Buying into the Regime, the Politics of Gender, Consumption, and Labor in Cold War Chile and the United States,” was based on research from her book titled by the same name.

Tinsman began her presentation with an overview of the US’s sudden obsession with fresh fruit and healthy eating that developed in the 1960s. The US “became a fresh food nation, worried about toxins and trans-fats … Grapes played a very special role in changing American food tastes,” she said.

Grapes quickly became the most popular fruit in the US. In the 1970s American consumption was measured at less than two pounds of grapes per capita. This figure has since soared up to over ten pounds per capita, Tinsman said.

These grapes didn’t all come from American farms, however. In fact, since the military overthrow of Chile’s socialist government in 1973, nearly all the grapes eaten in the US from January to April are grown in Chile, Tinsman said. Additionally, she said this rapid production of grapes in Chile came at a great cost to Chileans.

Yet Tinsman also stated that the rise of the Chilean grape industry had multiple benefits for the Chilean workers themselves. Consumerism in Chile witnessed a sharp increase, with purchases of products such as TVs, radios, and washing machines becoming more and more frequent amongst Chilean workers.

“Most … workers saw their purchases as positive improvements in their lives,” she said.

Tinsman also found that the rise of the Chilean grape industry led to a large restructuring in gender relations within peasant families, allowing women to increasingly find employment as low-wage laborers in the fruit industry. As such, this gave peasant women unprecedented monetary independence and also led to men becoming increasingly involved in family life.

Tinsman also focused much of the lecture on showing the differences between how the grapes were advertised between Californian grape growers and Chilean grape growers.

“From the California side of things, we see a sustained recourse to nature, the idea of mother nature, pristine goodness, and a certain hipness to eating your fruits and veggies,” Tinsman said.

Conversely, “we see something very different from Chile. Chilean advertising emphasized health and freshness, but science rather than nature was the source of such goodness,” she added.

Cameron O’Neill ’21 said she felt Tinsman provided a interesting, new perspective on a rather everyday topic.

“I found the topic, as well as Dr. Tinsman’s presentation if it, fascinating. It’s interesting to think how something as seemingly banal as fruit could have such an impact on global politics and economy,” she said.