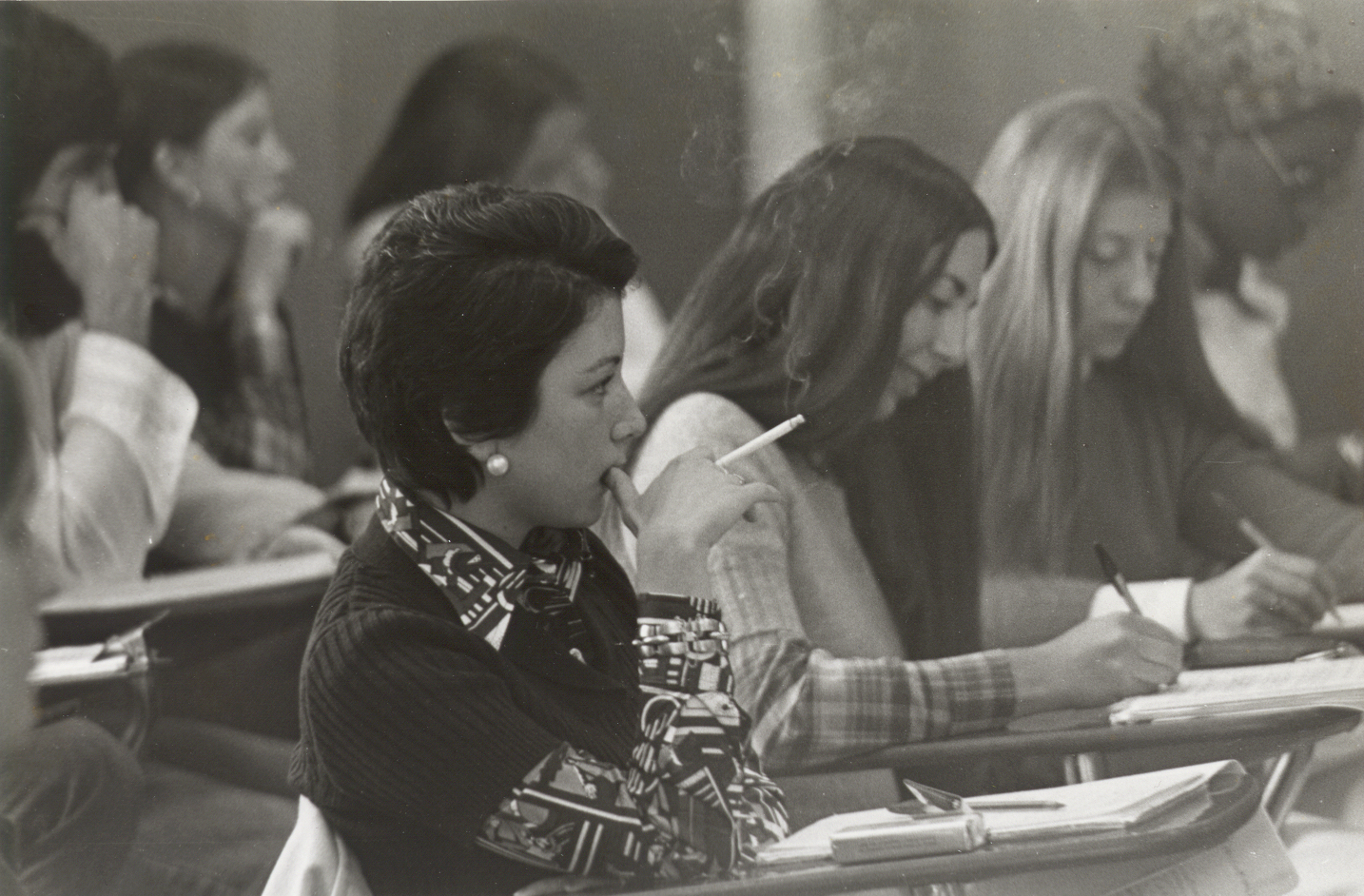 Yesterday was International Women’s Day, and protests and marches to show solidarity among women occurred around the world. At Lafayette, achieving diversity has been a struggle for women and other minorities. Breaking the barriers meant taking the heat, according to the Oral History Project (OHP) sponsored by the college.

Though Lafayette has nearly the same amount of men and women today, the previously all-male institution welcomed its first official coeducational class 48 years ago, in September 1970. According to Lafayette’s coeducation history site, the class consisted of a total of 146 women: 123 freshmen and 23 transfers out of 1850 students.

According to the site, a survey was sent out to 14,250 alumni asking if they think Lafayette should allow women students: 56% felt that the college should remain all-male.

However, in a sample poll conducted by the Student Council, of the four hundred respondents, 77.3% were in favor of coeducation, while only 22.4% were against it, according to Lafayette’s coeducational site.

Since the spring of 2002, the college has been working on the “College Archives Oral History Project,” which is a project meant to document the education and life experiences of African-American, women and LGBTQ students from the late 1960s and early 1970s.

OHP staged a presentation in October 2003, using excerpts from the interviews. The presentation was entitled “We Were Pioneers,” and the names of the people interviewed were not displayed, only their class, gender and race.

In the interviews recorded by the OHP, women expressed that there were subtle, if not blunt, acts of sexism at the college.

The project consists of recorded interviews of faculty members and alumni from that time period.

Liza Lucy ’74, who was interviewed in the project, said that the men who were part of the first coed class were friendly and welcoming toward women, but there were hostile behaviors by some upperclassmen.

Lucy said that there was a freshman handbook called “Pig Book,” later called “Hogg Book,” after Hogg Hall, that consisted of rating women based on their physical appearance and who were “the cute girls” to date.

“I found this pretty offensive, I’ve got tell you…it was interesting that fraternities would be posting Hogg pictures, and, you know, where the cute girls were living and such. It was really appalling,” she said.

Alumna and Associate Vice President of Human Resources Alma Scott-Buczak ’74, who is an African-American woman, said that black women were most likely to have personal connections to the people who fought in the Vietnam war.

“It [was] also in the middle of the Vietnam era, so you have both people that you know and you have students who are basically protesting the war. I think that was particularly of importance to African-American women because [compared to the white women at that time], we would be more likely to have people we knew, who were fighting or had fought in the war. And also have friends who were protesting the war,” she said.

She said that it was “heart-wrenching” to see the expression of the men at Lafayette when their draft numbers were called, even with the knowledge that they would get exemptions.

Kim Owens ’77 said at the OHP interview that, as an African-American student, she felt her race more presently than her gender.

“…I don’t remember that there was any particular reaching out to female students. There may have been, but I may just have been oblivious to that because….as well as being a female student I was also in a minority as a black student. And I think I may have felt that more strongly than being a female… you know, the difference of being female in a…mostly male environment,” she said.

Scott-Buczak also said that her race was more “critical” than her gender.

“What was most real to me was my race than my gender. So, when I look back at that time what I remember are things like re-establishing the Association of Black Collegians (ABC)…but that was more critical to me, than the things I was doing as a woman on a campus that was formally all male,” she said.

Upperclassmen boys showed their disagreement with coeducation by standing outside of the women’s dorms and harassing them by yelling “panty raid,” according to Lucy.

“There…was a period of time really early on where we were having a hard time studying because the boys were standing outside in the evening yelling, ‘Panty raid. Panty raid. Panty raid,'” she said, adding that she called the floor of girls for a meeting to try and put an end to the disturbance.

“‘Well if we want this to stop I suggest we do a jock raid and put an end to it.’ So we went screaming out of the dorm through their drawers and threw jock straps all over the lawn, and they stopped yelling, “Panty raid” every night, and we got back to studying.”

Alumnus and current English professor Peter Newman ’71 said that the hostility mostly came from the seniors.

“The only people that were opposed to the school going co-ed seemed the outgoing seniors and I thought that was….jealousy because they weren’t going to experience it…..[No one from] the people I hung out with had animosity towards the women for showing up [at Lafayette] and we were all pretty happy,” he said.

According to Lucy, roommates seemed to be assigned based on certain identities that the women shared.

“One of the things that we noticed very early is that all the girls were in rooms with basically roommates the same size. So there would be two tall girls and two short girls and two rounder girls. And I do remember also the black girls having roommates who were black,” Lucy said in the Oral History interview.

Director of Special Collections and College Archives Diane Shaw said that the college has no record of transgender or gender non-conforming people in the College’s record, but that with The Queer Archives/LGBTQ Oral History Project, they are working on getting those voices.

The LGBTQ Oral History Project, sponsored by the Pride Network, College Archives and the Women’s & Gender Studies Program, is dedicated to capturing and reflecting the experiences of Lafayette’s LGBTQ alumni and faculty members.

“We didn’t ask the right questions during the oral history interviews to elicit information, and the few occasions when we did, students told us that they didn’t even talk about that–that those things were never discussed…With our new LGBTQ oral history project, we are trying to capture some of those stories…We have yet to find a transgender student and I hope we can,” Shaw said.

Byerly said that she felt welcomed by male and female alumni on the basis of her qualifications.

“I think the women who were part of that early generation, if you interview them, could certainly talk about what was challenging about that, but it seemed to me that when I came to Lafayette as its first female president, I didn’t feel that being the first female president would lead to replaying the challenge of integrating women,” Byerly said.

“I felt that I was accepted on the basis of my qualifications and well-treated by alumni and others and so I didn’t find it specifically challenging except insofar as like any institution that was male-dominated for a long period of time,” she added.

There will be a Council of Lafayette Women event coming up from Friday, April 20 t0 Saturday, April 21, where “alumnae and faculty speakers will share their wisdom and expertise on a wide range of educational, personal, and professional development topics,” according to its website.

Pingback: The Exhibit on Lafayette’s movement towards equality and diversity on campus – The Lafayette