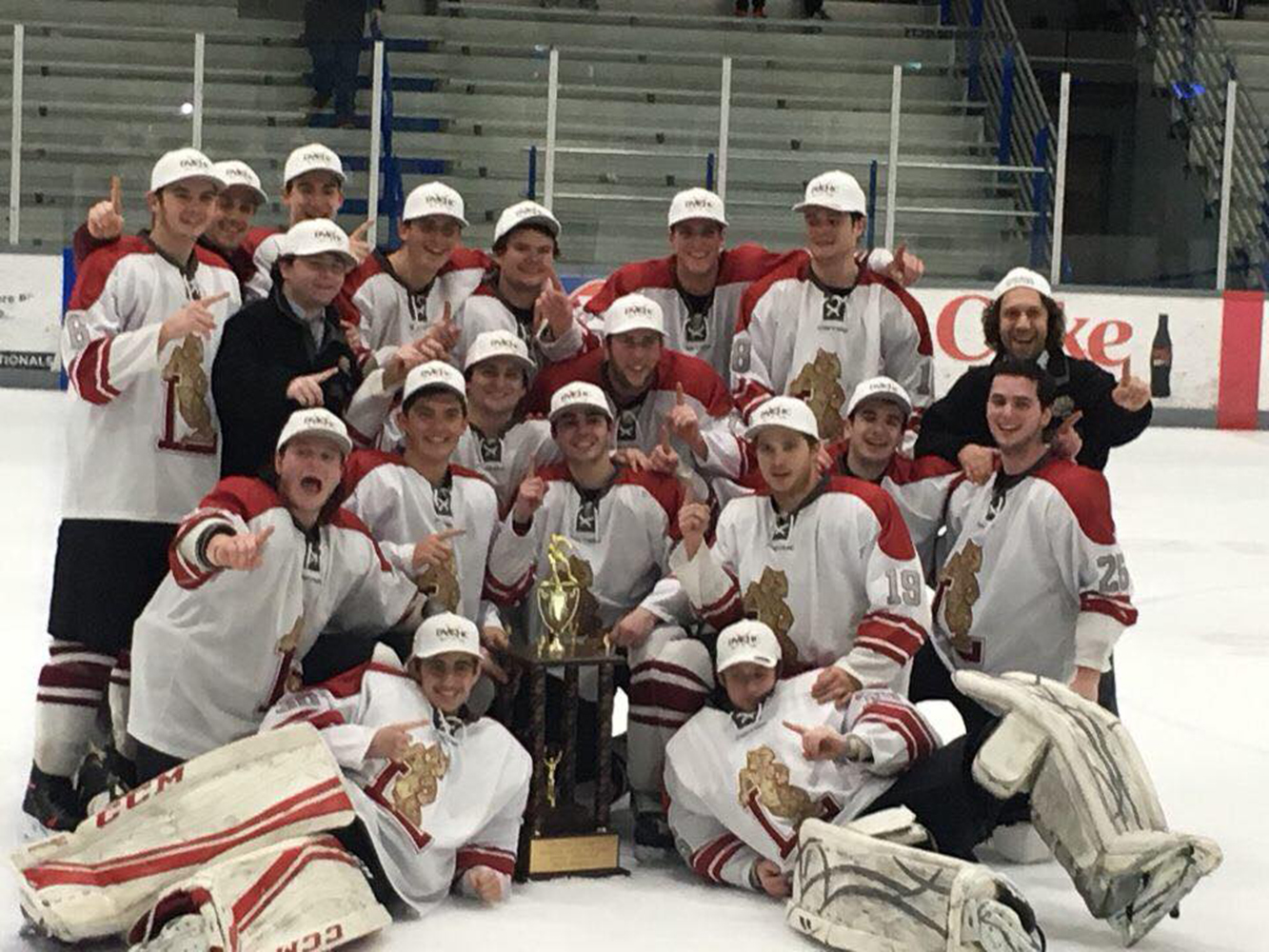 The Lafayette men’s club hockey team secured the Delaware Valley Collegiate Hockey Conference championship with a semifinal 4-3 victory over La Salle and a 5-1 thrashing of Susquehanna in the finals. According to the team’s Facebook page, this is their first championship win since the 2001-2002 season.

The thrilling victory over La Salle saw the No. 1 seed Lafayette leading 3-2 in the third, behind solid goaltending by senior Eric Herbst and goals from freshman Tristan Smith, sophomore Harrison Lapides and senior Brian Smith. La Salle netted a power play goal to bring the game to a 3-3 tie early in the final period. The team had to just keep their heads up at that point, according to Herbst.

“You have to ignore the pressure,” Herbst said. “Instant amnesia is a term that has been used before. They scored their third goal on a power play, which [resulted from] a dumb [penalty] on our part: too many men on the ice. They scored early into the power play, and we just had to realize that it wasn’t physically our fault–[it was] a mental error, so we had to just keep doing what we were doing and it paid off.”

Senior captain Parker Gaglione was prepared for the game due to his previous experiences.

“At that point, we’re thinking we’ve been in this situation against teams just as good, if not better,” Gaglione said. “We just have to sit back and relax and go back to the gameplan.”

The team made strategic adjustments in the third period, leading to junior Simon Rybansky netting what became the game-winning goal more than halfway through the period.

“It comes down to our coaches talking us through defensive zone, neutral zone, what our plans are going to be,” Gaglione said.

After Rybansky’s goal, Lafayette went into defensive mode until the final buzzer sounded.

“The best way to say that is a total buy-in of selflessness,” Herbst said. “We didn’t need to score anymore and just needed the defensive buy-in. Everyone understood that the goal was to get control of the puck and send it deep. [La Salle] didn’t have much sustained offense in the last few minutes.”

The team had just one day in between the semifinal and the final, but the team knew what to expect from Susquehanna, according to Gaglione.

“Going into Sunday’s game, we definitely took the momentum from beating La Salle,” Gaglione said. “We took that outlook to the Susquehanna game because they are similar teams. Being in the size of the league we are, we get to play every team a decent amount of times, so you get to see everybody’s strengths and weaknesses. We know we have been able to beat Susquehanna before, but we know it doesn’t matter in playoffs or the championship because teams can step up, so you have to go into every game as if you’re playing for the championship.”

Third-seeded Susquehanna pulled off a 6-5 upset over Bloomsburg to set up the meeting with Lafayette.

“[Our first thought was] ‘How did they do that?” Herbst said. “They hadn’t done that all year. They upset Bloomsburg, and we were all shocked because we weren’t expecting it. They must have played the game of their lives. Of course we didn’t take that lightly, because they did it before and can do it again. We wanted to come out strong to start the game.”

Lafayette’s first shot of the game ended in a goal by junior Ted Granbois, and sophomore Will Murdoch followed up with the second shot and goal of the game making it 2-0 in the first period.

“After that first goal goes in, you have a bit of a sigh of relief,” Gaglione said. “You strike early and look to keep it rolling. You see the parents and kids and students who [came] to the game just get behind you. Once one goes in, you get the feeling that another one was going to happen, and it felt like there’s wasn’t anything that could slow us down.”

Susquehanna scored a goal to cut the deficit to 2-1, but after that it was all Lafayette.

“The goal they scored, I made a mistake beforehand,” Herbst said. “I tried playing [the puck] behind the net and it took a bad bounce and went over my stick. They got the puck, and as I retreated back to the net, they made a couple passes, took a shot and it went in. That was one of our only mistakes.”

Junior Bobby Cloughen, Tristan Smith and Rybansky poured in a goal each as Lafayette outshot Susquehanna 27-15. As the game forged on, Gaglione wasn’t about to assume victory too early.

“You really try to suppress that until the end, because Susquehanna came back from a large deficit to win against the No. 2 team,” Gaglione said. “So we knew that until there were 30 seconds left in the game that you need to keep your foot on the gas and can’t take anything for granted.”

Hopes of a championship began early in the season as the team began to mesh well.

“We had a tournament at the beginning of the year, and the first two games we were trying to figure out lines and systems, so we were a bit discombobulated,” Gaglione said. “During the third game, coach made a bunch of changes with the lines and systems, and everything felt like it just clicked. We kinda knew we had something special there.”

“From the beginning of the year, that was our goal,” Herbst said. “Coming out of winter break, we played La Salle for the second time. We lost the first game 2-1, even though we dominated them in shots. This time we won 5-3 in a decisive victory. That helped us solidify the No. 1 seed and gave us the confidence that we could beat anybody. We had already beaten Susquehanna twice and Bloomsburg once.”

For the seniors on the team, their freshman year brought a semifinals win over Susquehanna and a finals loss to La Salle.

According to Gaglione, the team has improved since he joined the team as a freshman.

“I look forward to seeing how this program grows,” Gaglione said. “From the time I joined it, the president and captain Kyle Brennan at the time positioned us for growth and success. Without him, we would not be in this position that we are right now. The direction he pushed the team in helped the organization grow from the captains last year to the new senior class next year.”

Herbst said he is satisfied with the progress made over his time with the team.

“We’ve established enough to repeat or [at least] hopefully contend,” he said. “The sophomores and juniors are capable of leading the team. We already have a couple of recruits for next season who we know are going to play and are excited to play.”

“It’s all you can really ask for, to see something come to fruition,” Gaglione added.

Tristan Smith ’21 is a contributing writer for The Lafayette. He did not contribute to this article.