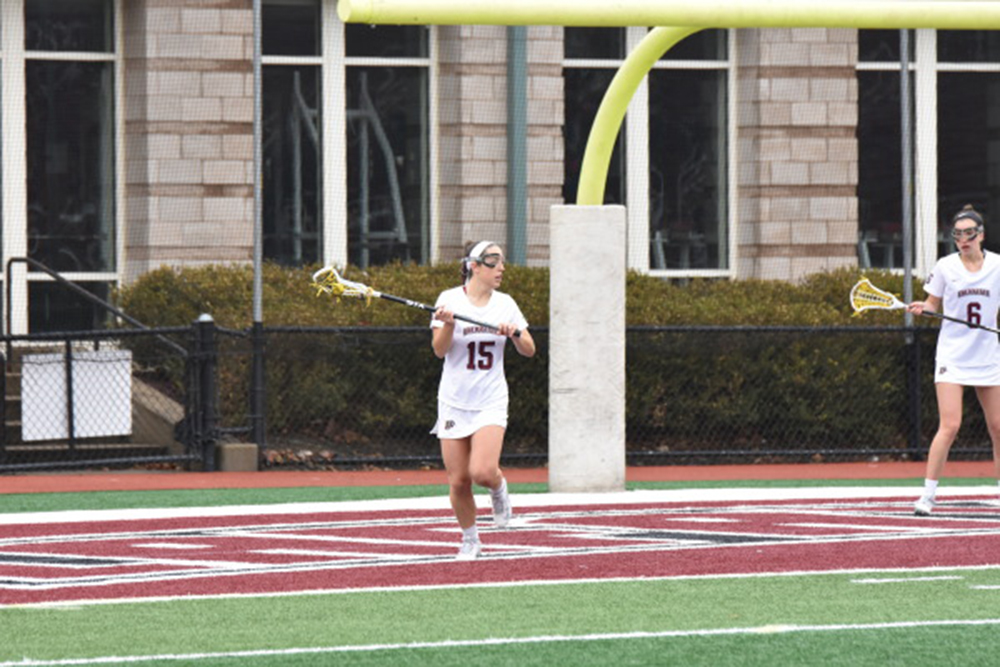 Junior attacker Jane Kirby led the Leopards in their win against Manhattan with six goals. Photo Courtesy of Athletic Communications

The Leopards hosted Temple for the third game of the season. In the 2017 season, Temple won their matchup 18-12. Temple was looking to run away with the game after the first half, but the Leopards worked their way back in the second half. The late surge just ran out of time, as Lafayette fell 18-15.

The Leopards bounced back against Manhattan, also at home. The score was close for most of the game, as neither team led by more than three goals until junior attacker Emma Novick sealed Lafayette’s victory with a goal with 3:08 left in the game. Manhattan scored once after, but Lafayette took the win, 12-9.

Novick, Lafayette’s lead scorer, started the Temple game off with a goal within the first minute, and another one later on in the half.

After Temple put up seven goals, sophomore midfielder Bella Alampi scored with 16:48 left in the half.

With one minute left in the half, junior attacker Jane Kirby took the feed from freshman attacker Anna Stein and netted a goal, energizing the Lafayette Leopards for what was to come in the second half.

By halftime, Temple was dominating with 28 shots on goal, compared to Lafayette with only 14. The Leopards trailed 11-4.

In the second half, Lafayette roared back with 11 goals, including three each for Novick and Kirby. Junior midfielder Hannah Davey and Stein contributed a pair of goals each in a highly productive offensive second half. The comeback fell short, as Temple held off the Leopards to finish with a score of 18-15.

Freshman goalkeeper Quinn Lacey had a strong game, in goal for the majority of the game with 45:41 of playing time, surrendering 10 goals.

“Quinn came in and was absolutely fantastic between the pipes,” head coach Alison Fisher said in a postgame interview. “She’s got a lot of talent and today she definitely showcased that.”

Raymond and Quinn combined for a total of 12 saves in the game.

“I think today overall we got a lot closer to finding our identity,” Fisher said in a postgame interview. “Temple’s a really good opponent and probably one of the strongest ones on our schedule. To make so much progress in a game and against a team like that definitely gives us a lot of optimism moving forward.”

The stars of the victory over Manhattan on Feb. 28 were Kirby, Lacey and Stein. Kirby scored half of the Leopards’ goals while Lacey doubled down on her previous performance, recording six saves and allowing just nine. Stein was the only Leopard to record any assists in the game, notching five of them.

Manhattan started quickly, netting a goal under half a minute into the game. The pace slowed after that, and the Leopards trailed 5-4 going into the half. Four different Leopards put up the goals in the first half; senior midfielder Kristin Schaen, Novick, Kirby and Davey.

Kirby took over in the second half, scoring five of Lafayette’s eight goals. Novick notched a pair of goals and Davey recorded a score as well. Lacey locked up the net, saving three shots and letting in four, one of which was after the game was essentially decided. The Leopards walked off the field with a 12-9 win over Manhattan.

The Leopards will remain at Fisher for their matchup on March 4, hosting East Carolina.