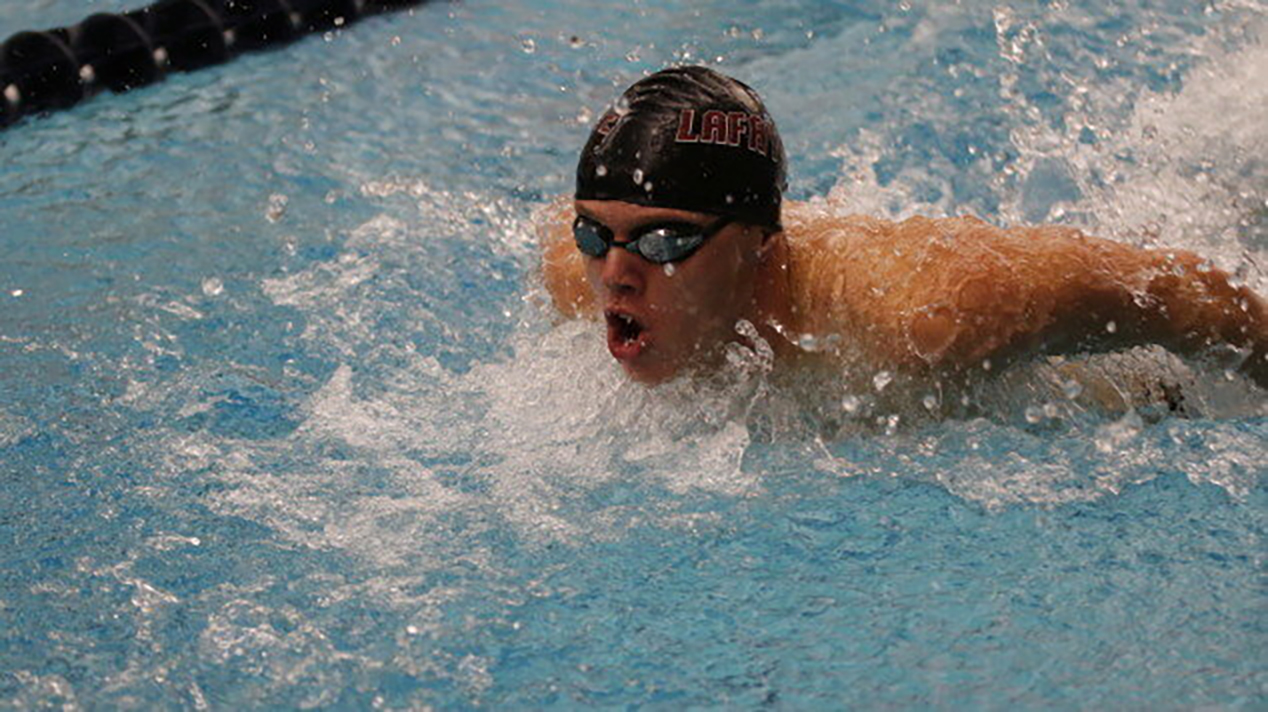 Thirty-four Lafayette swimmers traveled to the Naval Academy in Annapolis, Md., this past weekend for their four-day Patriot League Championship meet.

Freshman Matt Tascione had one of the Leopards’ top individual performances, with a time of 2:07.50 in the 200m breaststroke, which placed him 15th in the meet and moved him up Lafayette’s top 10 list of swimmers in this event.

Senior Noelle Buckley and junior James Grieb both snagged 14th in their 100m breaststroke events.  Buckley touched with a time of 107.12, moving her to third on the top 10 list for Lafayette, and Grieb swam a 57.31, advancing him to fourth on the list. Grieb also had a solid performance of 1:42.05 in the 200m free, moving him into seventh on the top 10 list for that event in the Leopards’ record books.

Sophomore Bryce Currie moved to eighth on the list top 10 list of Lafayette all time, with a time of 1:42.42 in the 800m freestyle.

Several other performances scooted women swimmers to top 10 finishes in the meet, including sophomore Anne Marie Mozrall (10th) with a 53.04 in the 100m freestyle and junior Faye Melekos (third) with a 56.97 in the 100m fly.

The Leopards also had some outstanding performances with their relays. In the 200m medley relay, senior Allie McBreaty swam her 50m freestyle split in 23.80, placing her sixth on the school’s all-time top 10 for that record.  The 200m free relay, consisting of McBreaty, Mozrall, senior Sydney Wight and senior Julia Hall, finished in ninth with a time of 1:37.24.

“The men had to beat Holy Cross in the relay to place ahead of them in the overall team scoring and they did,” head coach Jim Daily said. “Everyone split 46 and also just missed the school record.”

Grieb, senior Xavier Laracuente, Doherty and Currie also placed seventh in the 200m free relay, finishing in a time of 1:24.

The women’s 400m medley team closed out the second day with a big performance, placing them in eighth. Wight, McBreaty, Hall and Mozrall swam their best splits ever, scoring times that are now in the top 10 of Lafayette all time.

“Championships are always very fast,” Daily said. “The Patriot League always seems to produce several NCAA Division I ‘B’ qualifying standards along with a few ‘A’ standards being made. That’s great news for a league that averages partial scholarship only. Most of our performances should make it into the all time top 10 performances and some of them will be team records.”

The women finished out the weekend with 93 points, placing them in tenth.  The men placed ninth with 114 points, beating out Holy Cross and missing eighth place by only 4 points. Navy won on both the men’s and women’s side scoring more than 900 points each.