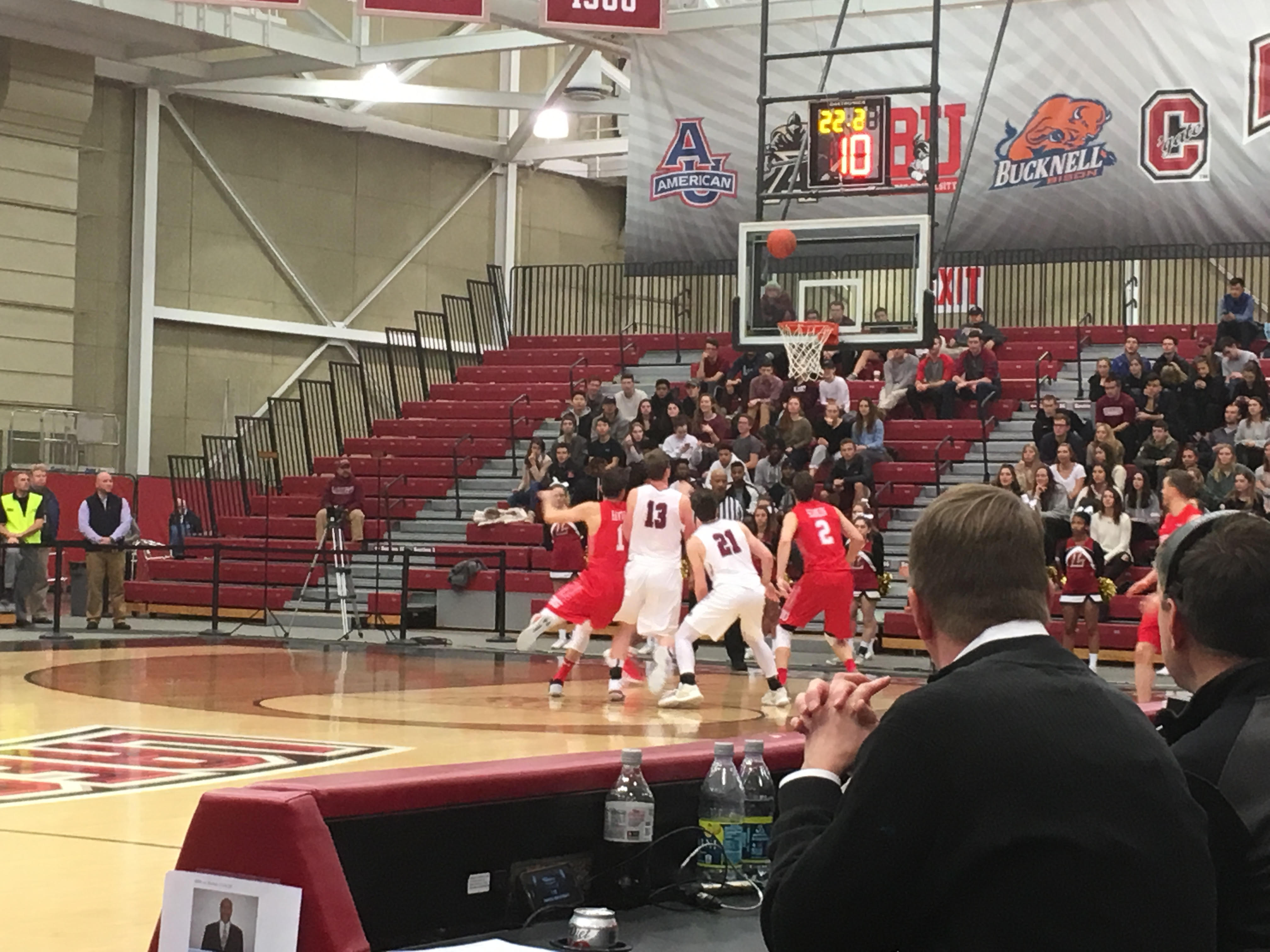 Matt Klinewski (13) and Alex Petrie (21) position for a potential rebound after a Leopards shot. (Photo by AJ Traub ’20)

Last Saturday, men’s basketball faced off against the American University Eagles in Washington D.C.. The Leopards finished the game strong, scoring 40 points in the second half to defeat the Eagles 63-52.

“The second half we locked in defensively and played really well,” freshman Justin Jaworski said. “The team moved the ball well and didn’t turn it over as much.”

Senior Matt Klinewski was close to a double-double with seventeen points and nine boards, and Jaworski and freshman Alex Petrie had eleven and fourteen points, respectively. Each hit all his free throws, with Jaworski at five for five and Petrie eight for eight.

One aspect of the team’s game that doesn’t show in the final score is their defensive prowess in the second half, as the team started off a bit slow after their long trip to Washington.

“The first half we didn’t play well, but in the second half we made some adjustments,” Petrie said.

After a slow start to the season, the men’s basketball team has put themselves into a decent position in conference play with a 3-5 record, contending in all of their losses.

One reason behind their growth as a team is their new found intensity on the defensive glass. Jaworski says that the team has been working on their rebounding game, and Petrie talked about the physicality required to earn a rebounding advantage, which has started to find its way into a small, but strong team.

The Leopards have the most defensive rebounds per game of any team in the Patriot League. Although on the other end of the court, the team ranks second to last netting only 6.5 offensive boards per game. Games will often come down to differences in second chance points and points in transition, and the team’s poor offensive rebounding is not indicative of an advantage in second chance points. If the Leopards can start winning some offensive boards, they could start running up the Patriot League standings.

After a little bit of a slump in the middle of January, some extra offensive boards could be just what the doctor ordered for a basketball team that shows potential to give big names some trouble as they get deep into the season.

The Leopards weren’t able to keep the momentum going when they faced Boston University. They fell in a heartbreaking 75-72 loss at home on Jan. 24, despite Petrie scoring 11 points in the final 41 seconds.

The Leopards head to Worcester, Massachusetts on Saturday Jan. 27 to meet Holy Cross.