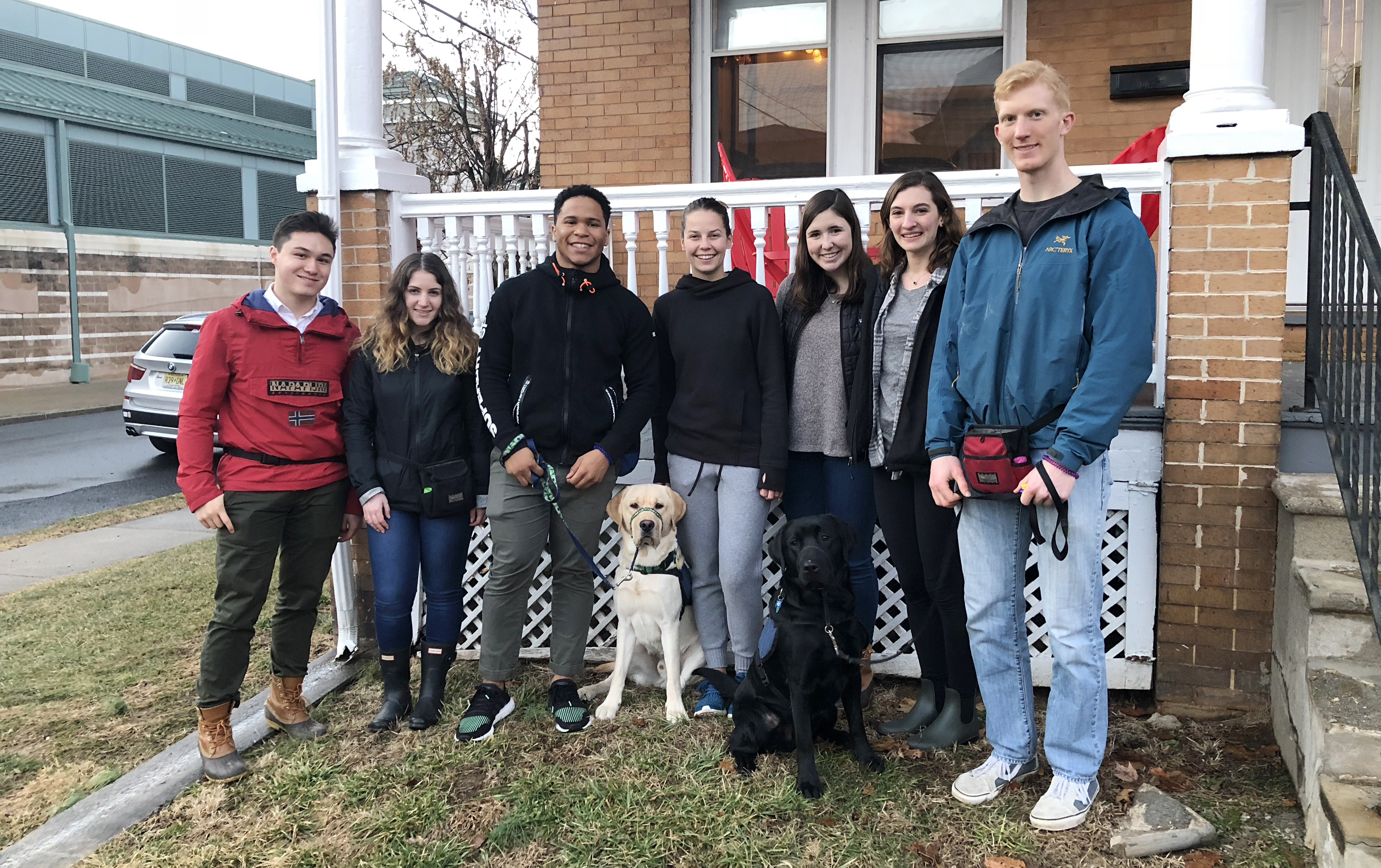 The members of the Dog House with the new dogs, Moby and Stuart. (Photo courtesy of Sydney Crowe ’19.)

This week, the dog house filled its empty water bowls for its two newest four-legged friends: Moby and Stuart.

Moby, the black Labrador Retriever is about 14 months old, and Stuart, the yellow Lab is about 15 months old. Moby shares the same dad as former dog house residents Hugo and Basie.

Before Lafayette, Moby and Stuart were both trained in prison programs, according to dog house resident Sydney Crowe ’19. The goal in bringing them to campus is to help socialize the dogs before they move onto the second phase of their training.

“They did not often see things like squirrels and other sounds that often occur here on campus while living in prison so we are working to get them used to their new surroundings here at school,” Crowe wrote in an email.

Since Moby and Stuart have already finished their first year of official training, they will not be learning any new commands at the dog house. Despite being in the prison program, however, their training was exactly the same as the former dog house companions Lance, Hugo and Basie received, Crowe wrote.

This semester there are seven students responsible for overseeing Moby and Stuart’s training, with six living in the two houses on Monroe Street. While there are less students than last year, with only two dogs, there are still the same amount of students working with each dog.

“I think that my favorite part of the training the dogs is that we spend quite a bit of time teaching the dogs commands at home and they are very quick to learn, it is great to see them doing the right things while out amongst all of the distractions,” Crowe wrote.

Like the first three dogs, Moby and Stuart will move into the program’s kennels at the end of the semester to begin their second stage of training.

As for Hugo, Lance and Basie, Crowe wrote that they are adjusting well to kennel life and have started learning their service skills such as retrieval, tugging doors and cabinets open and pushing buttons.

“In this part of the training [Lance, Hugo and Basie] live in the kennel and get one and half hours of playtime a day in a group to 4-6 other dogs. After that they spend an hour in [the] “Zen Den” where classical music plays, a diffuser is on with different relaxing scents and the lights go out for a nice nap,” Crowe wrote.

While campus had grown fond of the first dog house residents, Moby and Stuart are being welcomed into the campus community with open arms, and Crowe said that people can pet them after asking permission from the trainer, who will determine if the dogs are behaving well enough to be pet.

“For petting the boys it will be a similar situation as the last three. If they are behaving we will reward their behavior with allowing people to pet them as long as they are sitting,” Crowe added.