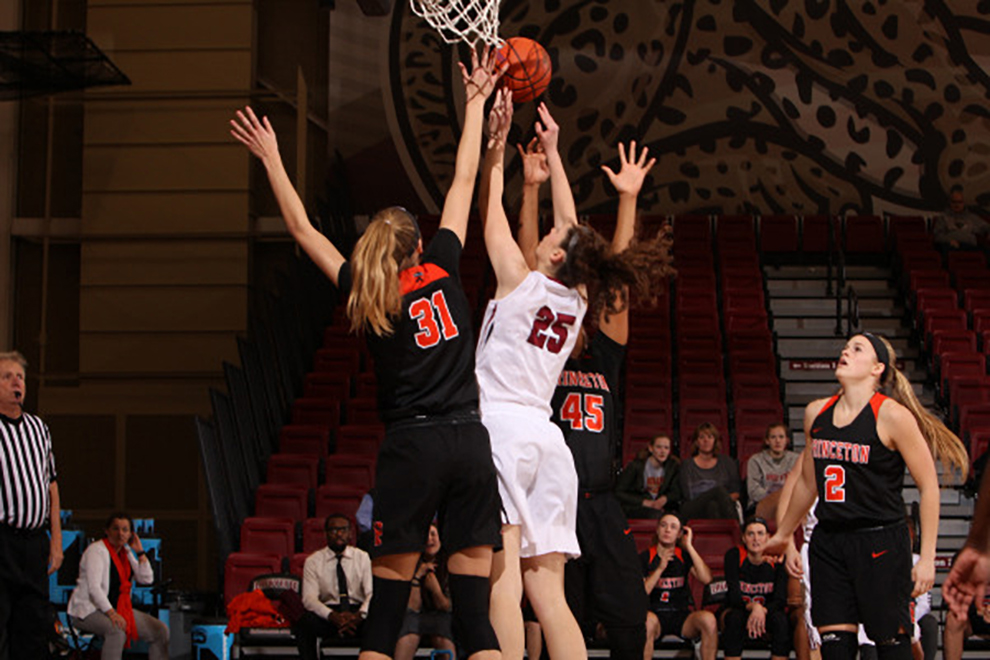 Natalie Kucowski ’21 battles to get the rebound. (Photo Courtesy of Athletic Communications)

The Leopards’ winning streak came to an end as they met the Drexel Dragons on the court in Philadelphia on Dec. 1 in a 52-37 loss.

“We still have a lot of work to do,” freshman guard Drew Freeland said. “I think we just need to keep working towards what’s next, and this game will make us better. It’ll make us mentally stronger as a team.”

Lafayette came out strong in the first quarter with a five point lead, but their energy dwindled away in the middle quarters of the game.

The Dragons finished the first half with a nine point lead and kept their momentum into the second half, making it difficult for Lafayette to resurge with a comeback. The Leopards had a hard time moving the ball around on offense and attacking Drexel’s zone.

“We struggled with making adjustments with our offense when they switched their defense a few times, and that obviously led to our struggles with scoring,” freshman forward Natalie Kucowski said.

Lafayette led the game in shots and rebounds, but was unable to outscore their opponent. The Leopards held the Dragons to just 52 points, showing the strength of their defense.

“Our defense was good, even though we had a letdown in the energy,” Freeland said. “Our communication was better than it has been. They were very good off the drive and shooting, but we only allowed them 52 points. In general, holding a team to 60 or less is ideal.”

Kucowski, who was named Patriot League Rookie of the Week for the second time this season, and Freeland tied for leading point scorers for the Leopards, with seven points each.

“We were running the floor well and getting easy shots off of their zone in the beginning, and that’s how I was able to get the points in the beginning,” Kucowski said. “Offensively, I could work on making sure that it’s the right shot for me or seeing if I have a teammate who is more open than me.”

Despite their loss, the team is already having a stronger start than the 2016-2017 season, with a new coaching staff and freshman class joining the more experienced members of the team.

“We want to be the best that we can be,” Freeland said. “We don’t have much to lose because last season didn’t go too well, so I think it’s more to just improve from last year.”