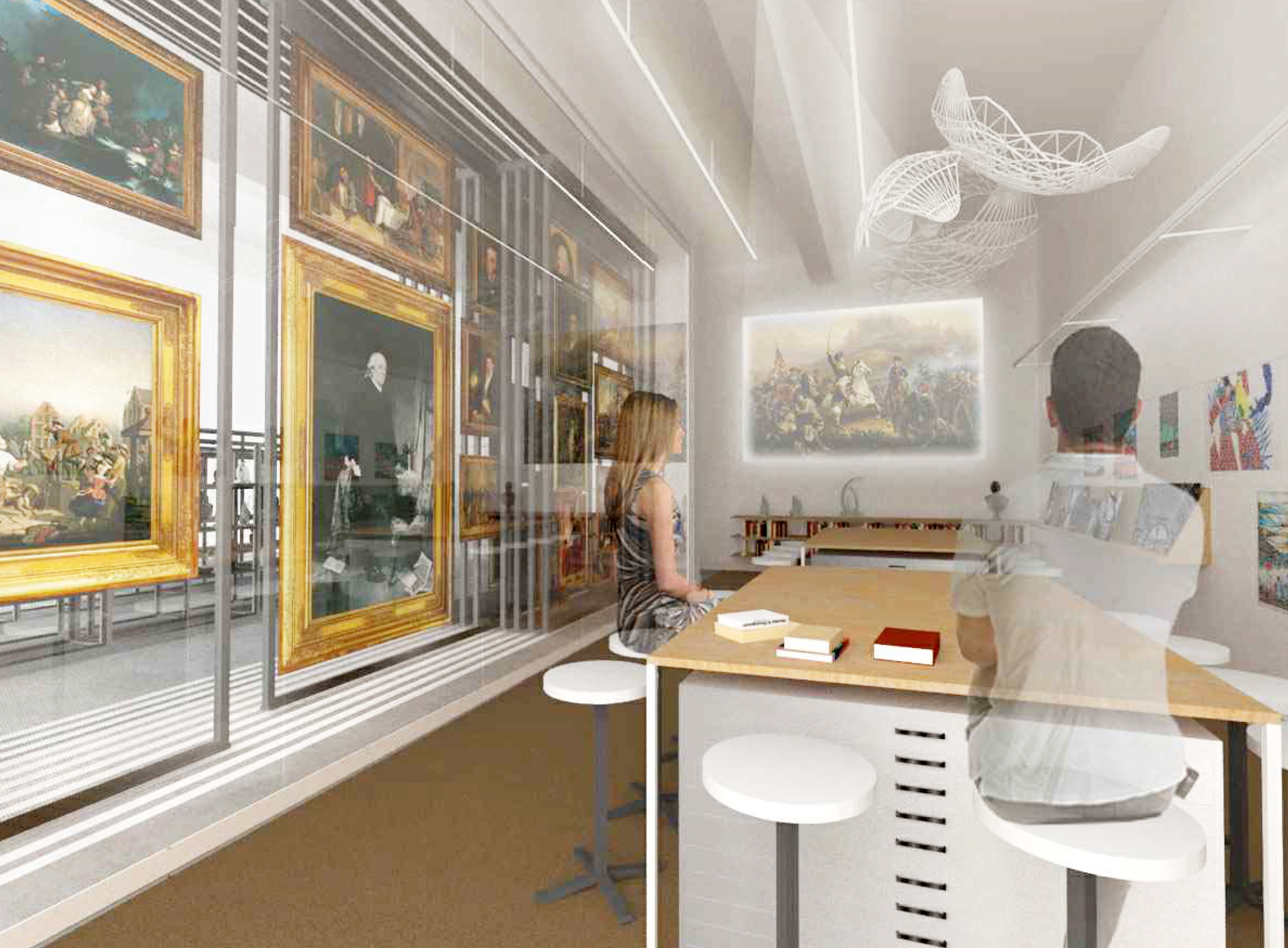 The proposed design for the renovated black box theater in Williams Center for the Arts. (Photo Courtesy of Michiko Okaya)

Original paintings of the Marquis de Lafayette by Thomas Sully and of George Washington by James Peel will soon leave the confines of the third floor of Kirby Hall of Civil Rights and become part of the new art exhibition and study space in the Williams Center for the Arts.

“The idea about having visible storage is to be able to have the doors open so people can actually come in and look and see what we have, and I think it’s important,” Director of Art Galleries Michiko Okaya said.

Currently, the college’s art collection, consisting of about 5,000 objects, are being held in storage, Okaya said. As a result, it is hard for students to access the collection and interact with the art in person.

“What it means is that students, faculty [and] researchers will have access to the collection, really for the first time. Otherwise they have to call, and you have to take them over, you go up. And it just makes it hard to use it for classes,” Okaya said.

When the old black box theater in Williams Center for the Arts became vacant after the opening of Buck Hall, which had its own new black box theater, Okaya got the idea of renovating the space to fit the needs of the students and the college.

The new room will be climate controlled to protect the artwork, tightly secured and divided into three main sections: a student study space, a painting display case and a library.

“The painting racks will be [behind a glass wall]. Students, well, actually anybody, will be able to see whatever’s hanging on the painting racks that are visible, facing forward,” Okaya said.

The painting racks will take up almost half of the available space. Adjacent to it will be the library holding photographs, files and other material that will be regularly locked up when the room is open to the public.

“We’ll have a couple of rows of compact shelving, flat files which are the wide draws that have works on paper. Smaller short, less high shelves that we can put boxes [will] have photographs in them,” she said.

As for the study space, Okaya said there will be a monitor where students can pull up images of pieces in the collections and enough workspaces to easily accommodate eighteen students.

Vice President of Finance and Administration Roger Demareski said that the project will begin over interim and will provide a needed space for art education.

“It’ll allow students from an education standpoint to have access to the art,” Demareski said.

While demolition is starting after finals, Okaya said she doesn’t expect the room to be open during this academic year, and that it will take the summer to move the entire collection.

Aside from the paintings of Peel and Sully, the collection will also hold polaroids of Andy Warhol and the work of American photographers including Danny Lyon and Arthur Rothstein.

Additionally, the project involves renovating an old set room in Williams Center for the Arts to be set aside to become a “clean workroom” for art pieces.

Okaya said she is most looking forward to being able to have students work on projects in the arts center and use the collection more frequently.

“Why have a collection if you can’t use it?” Okaya said.