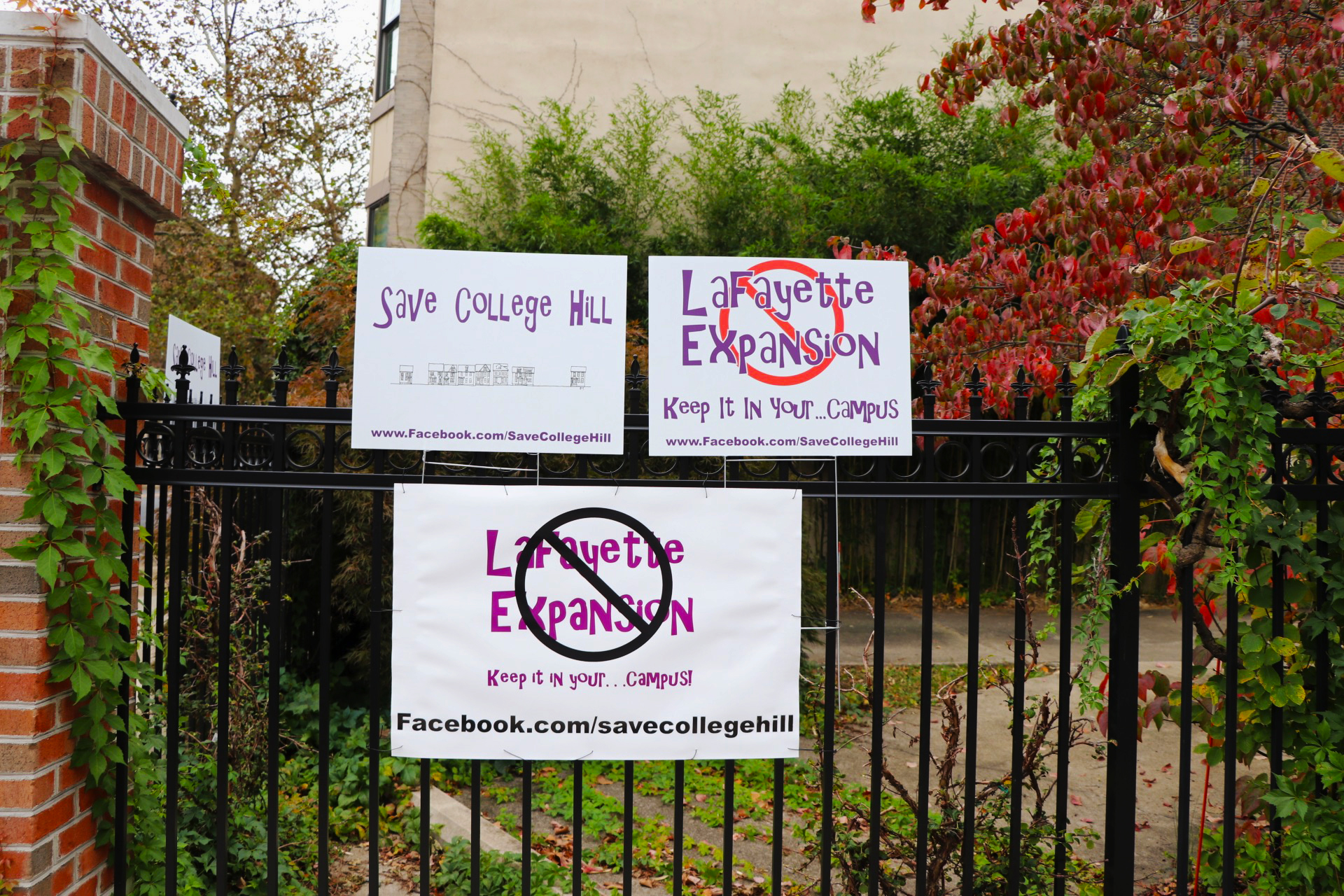 The college recently proposed to reevaluate part of their dorm project in response to continued pushback from the neighborhood. (Photo by Elle Cox ’21)

College officials stood before students this week answering questions about opposition to the college’s expansion and inquiries into how the college is going about it. Some students left unsatisfied.

Attendee Danya Kats ’19 asked presenters Vice President of Finance and Administration Roger Demareski and Vice President of Campus Life Annette Diorio about the lack of support from the community and their partnership with Lafayette professor and city planner Paul Felder, a vocal critic of expansion.

“I was wondering what happened in the planning process that happened to take this extreme position? Because he is clearly not on the same page….so I’m just wondering why this misrepresentation is happening and why [there is] this lack of popular support?” Kats asked about Felder’s current relationship with the project.

Felder now runs the Save College Hill Facebook page. However, Felder had previously worked on the Housing Executive Committee during the design portion of the process, according to Demareski.

Diorio responded that the college recognizes that there are different voices, but that she cannot speak for someone else.

However, not all students who attended felt responses such as Diorio’s, or the presentation itself, were adequate at addressing the worries of residents like Felder.

Jazmyn Ball ‘20 said she felt the presentation did not fully address the opinions of those who oppose expansion.

“I felt like they were kind of trying to talk about [the expansion] in a really positive light, and they didn’t address the negative parts of it until people asked questions about it,” Ball said.

“The whole time [I thought] ‘How are they not addressing it?’” she added. “They did address the [negative parts of the expansion] in their answers but I feel like they should’ve addressed it directly because it seemed like they were trying to dodge it.”

In regards to the expansion project itself, Ball said that while she does not necessarily approve of the expansion, she found that she learned some valuable information.

“I used to be really against [the expansion] because I didn’t know as much information, but coming here I learned a lot. I’m not necessarily pro with it [either].”

Ball said she is concerned about the college increasing its size without providing housing.

“One thing I am really concerned about is that they increased the student population without already making student housing for it….I just feel like they need to have more resources before they start implementing these things,” she added.

The college plans to increase enrollment from 2500 to 2900 over 6-8 years. Demareski said that increasing the college by 400 students is not solely about expanding the college, but about Lafayette achieving need-blind status.

In regards to providing sufficient housing, a student asked about seniors being placed on waiting lists and not sophomores.

“There are a lot of seniors [who have been placed on the waiting list]. A lot of juniors don’t know where they’re going to end up living in the fall. But freshmen already have a place where they’re going to live, which I feel like doesn’t make sense because we’re already enrolled here. And we’re being placed on the waiting list,” the student asked. “I understand that this is going to add 400 more beds but you are already planning on accepting 400 plus more students.”

While the school plans on adding 400 more beds with the McCartney Dorm Project, Jenn Burkhart ‘19 asked if the college owns the property they plan on using.

“We don’t sort of do [hostile] takeovers. People sell us that property and some of them sold it to the College in the last couple of years,” Diorio responded.

Burkhart said she thinks it is important to listen to the college’s perspective.

“I personally don’t want [the college] to expand…I went here because it was a small liberal arts school and I wanted it to be small and personal…that’s what I was looking for. But realistically I’m not sure that making it from 2500 to [2900] is going to make that huge of a difference,” Burkhart said.

“I feel like it was definitely important to hear where the college is coming from because the college is an institution, it needs to grow and I know need-blind is something that they really want to achieve and growing the student body is how that is going to happen. I thought it was really informative,” she added.

Jenn Burkhart ‘19 said: “I personally don’t want [the college] to expand…I went here because it was a small liberal arts school and I wanted it to be small and personal…I’m not sure that making it from 2500 to [2900] is going to make that huge of a difference.” Similarly, when I was Early Decision-accepted for engineering, Lafayette had 1600 men. We won’t know the outcome until we get there.

At what point is this madness going to end. Current leadership is ruining the nature of this school. Having more students attend to be able to pay for students who can’t pay? The inevitable result of this is ruining the prestige of this once great school. What’s next, students living in trailers?