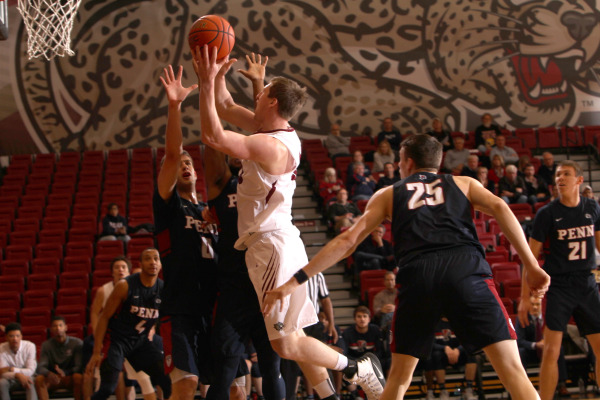 The men’s basketball team notched their first win of the season on Dec. 2 against the Quinnipiac Bobcats with a score of 79-58.

“Every game, the coaches give us a scouting report so we know what to do and what the other team’s plays are,” senior co-captain forward Matt Klinewski said. “They prepare us well. They make sure we know the personel and they give us a game plan. We just have to execute, which we did.”

The Leopards finished the first half with a close 30-29 deficit, but they were able to come back and dominate for the rest of the game. For the first time this season, the team was able to work through the full 40 minutes with high intensity.

“We defended much better against Quinnipiac,” freshman guard Justin Jaworski wrote in an email. “Outside of foul trouble, we had our best defensive game. In the first half we had a lot of guys who had to sit out their normal minutes because of foul trouble. Once we had all of our guys back for the second half, we just executed on both ends of the floor really well.”

Klinewski scored a game high 26 points in the win, sinking all 13 of his free throws.

“I try to mentor [my teammates] and lead them in the right way” Klinewski said. “I try to show them how Lafayette basketball is supposed to be played. Over the past six games that we lost, they’ve been frustrated, but I just keep telling them to keep their heads up because it’s a long season and we need to keep working hard.”

Performances from the younger Leopards also contributed to the Leopards’ win. Jaworski, who was recently awarded Patriot League Rookie of the Week, scored 19 points in the Leopards’ win, while freshman guard E.J. Stephens earned 18 points.

“My teammates do a great job of getting me open for scoring opportunities,” Jaworski wrote. “We have a lot of unselfish guys on our team. Also, I have just been working really hard and trying to just play my game. Pretty much every team we play passed on recruiting me so I try to keep a chip on my shoulder as motivation.”

Lafayette’s offense was able to topple Quinnipiac, but the Leopards’ defense was what really won the game. The Leopards held the Bobcats to 58 points.

“Our defense was really good this game,” Klinewski said. “We’ve been really working at it. I think we have a lot more talent on the team than we’ve had in previous years. We’re also much closer this year. I think it’s going to be a good season and I’m excited to see how far we can take it.”