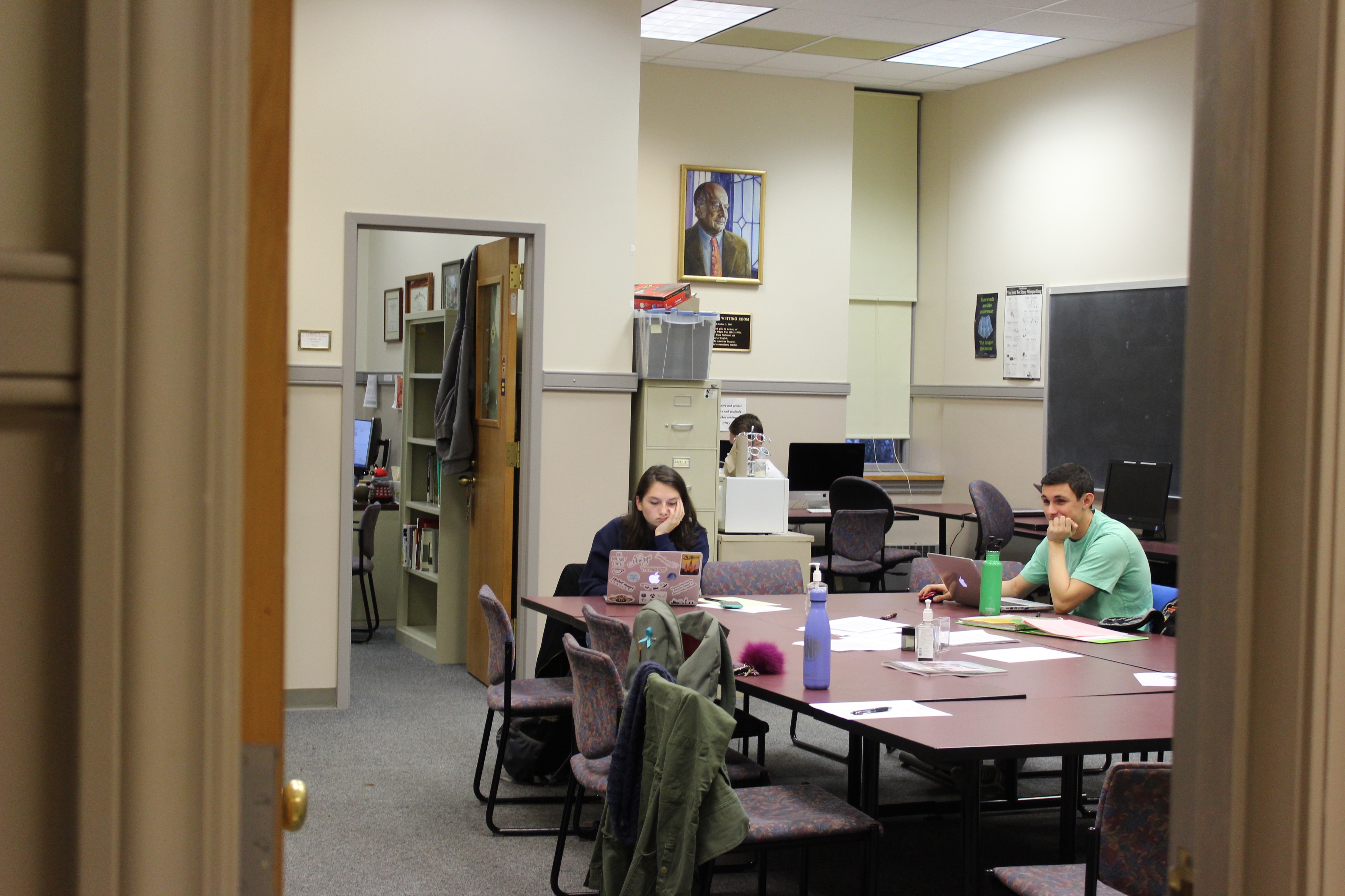 The College Writing Program is currently assessing the writing requirement and its effectiveness. (Photo by Adrianna Barazotti ’21)

Four pages of writing a week for a full semester and a mid-term and final paper that were 15 pages each added up to close to 80 pages which Henry Hichney ‘20 wrote for History 265. Yet, the class didn’t receive a writing (W) attribute.

“It’s the most writing I’ve done in a class, so I just assumed it was a writing class,” Hichney said. “[It was] the most writing intensive course I’ve ever taken and hopefully will [ever] take.”

The writing requirement is part of Lafayette’s Common Course of Study (CCS). Students are required to take a first year seminar and three additional “W” courses, with at least one being taken in and outside their major.

Coordinator of the College Writing Program  John Tatu said that while some courses may meet the page requirement to receive a W attribute, the other requirements may not be met.

“History courses, for example, tend to have lots of writing in them, but if the course isn’t one that’s designed with the idea of teaching you how to be a writer in history in mind then it’s not going to be a ‘W’,” Tatu said.

“For students sometimes that’s frustrating, and I totally get it,” he added.

In order for a course to receive a W, there has to be about 20 pages or 5,000 words of writing that is distributed across the semester. Additionally, Director of the CWP Bianca Falbo said, the writing has to be revised in response to feedback from readers, and there has to be, in the class itself, discussion of writing conventions or conventions of the discipline.

The curriculum changed in 2012 to include the present Common Course of Study (CCS) requirements and student learning outcomes (SLOs).

“My impression is that sometimes students find it a tad bit confusing. I’m not positive about that,” Tatu said.

Confusion surrounding the writing requirement, and other aspects of the CCS are one of the many things the college is currently assessing as part of its reaccreditation process. There is an outside assessment ongoing about the CCS which is working with the reaccreditation working groups.

Every eight years, the college undergoes a reaccreditation process from Middle States, a voluntary, nongovernmental membership association, which conducts accreditation and pre-accreditation activities for institutions of higher education.

“We are in year two of the reaccreditation review process.  At this time, we have seven working groups on campus drafting portions of the self-study report for Middle States,” Dean of Curriculum and co-chair of the steering committee Jamila Bookwala wrote in an email.

Throughout the semester, the working groups have been meeting to discuss individual data collection and to make plans for the organization of their portion of the self-study draft, which will be due the middle of January, co-chair of the steering committee Patricia Donahue said.

Between the working groups and the steering committee, there are around 56 people involved in the process. Donahue said that while none of the 56 are students, they plan on including students through open meetings in the future.

“We will be bringing in students and getting feedback. What we’re doing right now, asking people for data, isn’t really student-friendly. Using open meetings, we will get student impact,” Donahue said.

Falbo is part of working group three, which is about the delivery of the curriculum. This involves how the curriculum is delivered to students and the current teaching methods in place.

“We look at…the common course of study, the student learning outcomes, [and] how are the outcomes distributed across divisions,” Falbo said. “ Where are the W’s? Are they all in English or are they distributed across the curriculum?”

What she has found is that writing is more widely spread than Falbo assumed, and that they are spreading.

Additionally, Falbo is looking into assessing the SLOs of the writing requirement itself, and whether courses listed as W’s are enabling students to achieve those outcomes.

The original form of assessment planned for reviewing the effectiveness of the writing courses was student electronic portfolios compiled over the course of their four years. However, Falbo said, that plan has taken a while to put in place.

While the planned form of assessment has not been used, Falbo said they have done assessment in other ways.

“We looked at one semester’s worth of FYS writing to see if students were thinking about the rhetorical situation,” Falbo said. “We have learned that in the first semester you typically do not see enormous changes in student writings.”

“[We want to see if it is] feasible, [if students will] do it,” Falbo said. “When we finally get the samples at the end, [we will find out if they are] going to be able to tell us what we want to know about what students [are learning].”