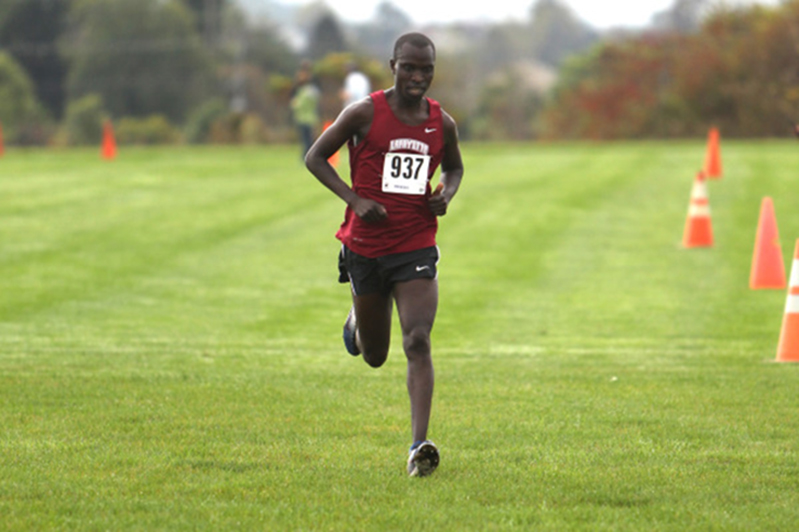 Senior Kelvin Serem plans on continuing the construction of his school in Kenya. (Photo Courtesy of Athletic Communications)

Kibargoiyet may seem to be just a small, remote village in Kenya, but for almost 200 kids, it is a haven of opportunity, thanks to a school built by Lafayette’s own senior cross-country runner, Kelvin Serem.

This year, head Cross Country and Track and Field coach Michele Curcio challenged her athletes to raise enough money to fully sponsor a student at the Blair-Serem School. The team reached their goal this November, and plan on making this an annual effort, according to Curcio.

“I have been very blessed and inspired by generous people who have given us much needed support,” Serem wrote in an email. “As I always say, it indeed takes a village to raise a child and my close friends, mentors, coaches, teammates, professors, Lafayette and Blair Community have been incredible in making this project successful.”

After Serem graduates in December 2017, he will take a year off to continue with construction in his village, while teaching math and English. He is in the “infant stage” of a new project that will create more employment opportunities for women in his village.

“I will also be applying to graduate schools while there and I plan to come back to U.S. for my masters,” Serem wrote. “Any program in International Development would be excellent.”

Serem was born and raised in Kibargoiyet. The oldest of eight siblings, Serem grew up with no plumbing or electricity in his home, while he excelled academically.

“I joined St. Patrick’s High School (public, all-boys school, boarding school) [in Kenya], and later received an academic scholarship to go and study at Blair Academy [in Blairstown, N.J.] for my junior and senior years of high school.”

Serem had always wanted to do something in his village, especially after coming to the U.S. With the help of Blair Academy, he could do just that.

“I knew that a dream of building a school in my village was becoming a reality and the school would eventually help transform my village and the country as a whole,” Serem wrote.

Building a school wasn’t easy, but Serem had no shortage of help. It seemed as though everyone was determined to help him achieve his goal, he wrote.

“After discussing the idea of building a school with [Blair coach and teacher] Mr. [Quint] Clarke, I did some fundraising while I was still a senior in high school,” Serem wrote. “I contacted close friends in Kenya in an effort to acquire land. My parents wanted to donate it but I didn’t want the school be like [a] ‘family thing.’ I also selected a few people from the village [who] helped me along the way.”

After graduating high school in 2013, Serem returned home to begin logistics. The project was truly beginning.

“I made sure that all the building materials were delivered to the site (bricks, ballast, cement, sand, timber, etc.), then contacted the contractor.” Serem wrote. “To make this long story short, everything went pretty fast and I am very grateful for many people that supported me along the way.”

Though the project moved quickly, Serem found himself encountering obstacles along the way, one of which was acquiring enough money. While he had a lot of help, Serem admitted his spirits were dampened.

“Some thought it was impossible to build a school at that age and I almost gave up,” Serem wrote.

Serem didn’t let this stop him though. His project was quickly becoming a success and he soon encountered his next obstacle.

“After we had admitted students, I then realized that we needed more resources for them because we had more parents bringing their kids to our school than we had expected,” Serem wrote.

Unfortunately, this brought him back to his funding issues.

“Construction of classes is very expensive,” Serem wrote. “I have been forced many times to change plans or slow down on some things, often leading to kids using temporary structures as classrooms that are not conducive for learning.”

Serem wrote he remains hopeful, however, as he plans to resume construction in the upcoming weeks in preparation for the 2018 academic year.

“Despite all these challenges, the future of our students is very promising,” Serem wrote. “This is one of those few projects that’s worth supporting by all means.”

The school has come a long way since Jan. 2014, the same month Serem began his first semester at Lafayette. The school has grown from 47 kids to nearly 200 now, 42 of whom are fully sponsored. The school has greatly expanded since its opening, even admitting Serem’s own sister.

“The school has so far impacted positively the lives of many kids beyond my village – [it is] a place they can call home,” Serem wrote in an email. “The school is indeed enriching their lives. Moreover, the school has provided the best quality education to the needy kids in my village. My sister is one of the kids who have benefitted. [She] no longer has to go home for lunch or breakfast because we all provide that at the school. Classrooms are spacious, too, and we hire the best and dedicated teachers across the country.”

To make donations to sponsor a child at the Blair-Serem School, visit the Blair in Kenya website’s donation page.