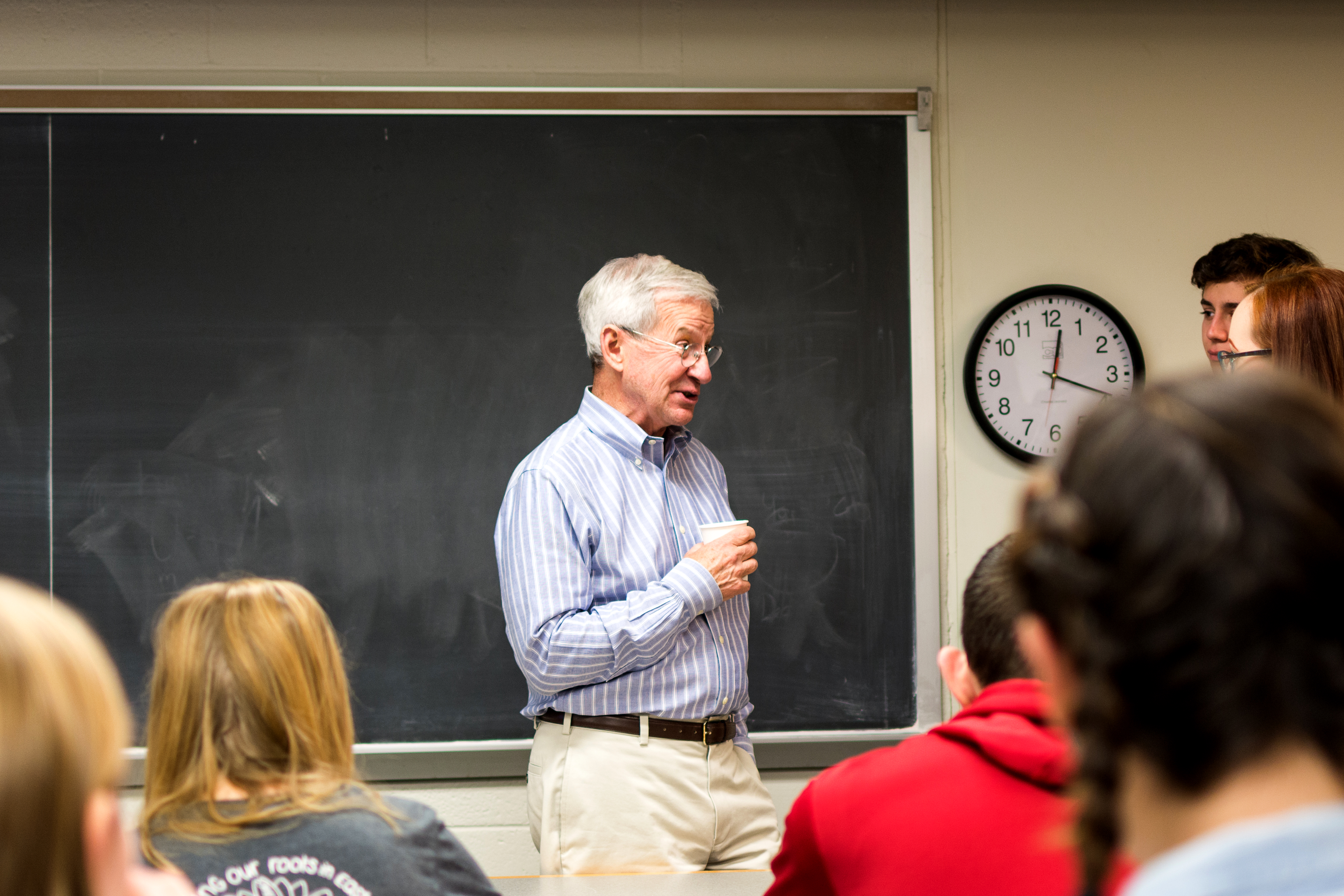 Former astronaut Terry Hart talked about his mission aboard the STS-41C Challenger. (Photo by Simon Curtis-Ginsberg ’20)

Becoming an astronaut is not a common career, but former astronaut Terry Hart got the opportunity and shared stories from space with students on campus this week.

Students of the American Society for Mechanical Engineers (ASME) contacted Hart to come speak to students about his experience in the aviation and aeronautics industries, and his time aboard the STS-41C Challenger.

NASA selected Hart for astronaut training in the 1970s, culminating in 1984 when he flew his first mission into space on STS-41C Challenger.  Hart ended his career as an astronaut soon after this mission and went on to teach engineering at Lehigh University.

As part of his mission aboard the STS-41C Challenger, Hart used a robotic arm attached to his ship to latch on to a nearby satellite and tilt it towards the sun in order to recharge its solar panels. Hart showed a video of their celebration after the repairs.

Hart also showed several photos he and his fellow astronauts took from space, including a photo of Moscow at night and the northern lights.

Part of Hart’s talk also focused on the past 100 years in aviation and aeronautics innovations, from the Wright brothers building the first airplane in 1903 to the space race between the United States and the U.S.S.R. and its profound impact on the Cold War, and then on to current developments in aeronautics research.

“That was 100 years in 20 minutes or so…I’m sure the Wright brothers could not have predicted very much of that at all, but it’s amazing what has happened and what’s going to happen in the next 100 years. So, it’s up to you guys to figure that out,” Hart said.

Regarding the future of the aeronautics industry, Hart was particularly enthusiastic about an infrared French rocket soon to be launched out of South America that will be able to capture light originating from around the time of the Big Bang.

“They really need to hire some marketing people at NASA, that’s a terrible name,” Hart said.

Scientists at NASA hope to use the Space Launch System to collect an asteroid from space to use for research. aid. The mission is estimated to last about five months, and they already have two colossal asteroids in mind.

“These are big asteroids, they are maybe city-block size,” Hart said.

“I loved his talk from the perspective of an astronaut and engineer.” Dominic Zhang ’21 said. “Although it was targeted for engineers, and I am a physics major, I could still relate and understand what he was saying which is all that matters.”

Disclaimer: Dominic Zhang ’21 a contributing writer for The Lafayette.