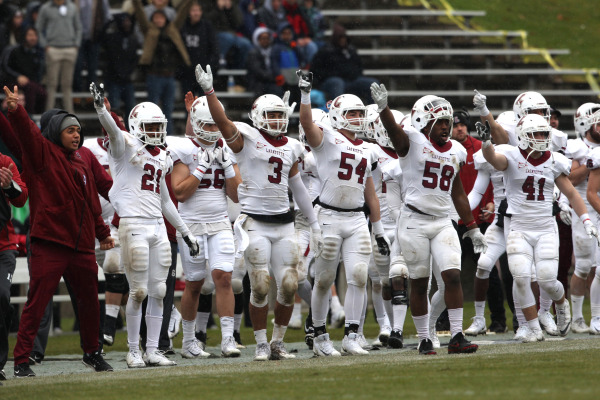 The Leopards get excited about a play at the Lafayette-Lehigh rivalry game. (Photo Courtesy of Athletic Communications)

Lafayette closed their season on Nov. 18 in the 153rd rivalry game with Lehigh, falling short 38-31. The Leopards ended the season 3-3 in the Patriot League and 3-8 overall, with nine players earning Patriot League honors.

In the 2016 season, Lafayette earned a record of 2-9 overall and 1-5 in conference. According to junior linebacker Jerry Powe, the Leopards improved their standing in the league with their play in 2017 and will look to continue doing so in 2018.

Powe is one of the nine leopards who ended the season with Patriot League honors, who was named to second team all-Patriot League. The first team defensive selections were senior linebacker Brandon Bryant, who is also on the shortlist for defensive player of the year, and senior cornerback Phillip Parham.

“I’m happy about it of course, but I expected it,” Parham wrote in an email. “I believe that you get out what you put in and I know in my heart that I put in the time, work and effort, so I expected it of myself.”

First team offensive selections were senior tight end Dylan Wadsworth, junior fullback Will Eisler and junior return specialist C.J. Amill. Wadsworth credits his and the team’s success this season to their response to the changes in the offseason.

“With a change in head coach comes a change in the culture of a program, and I think the team embraced the challenge of starting a new era of Lafayette football,” Wadsworth wrote in an email. “Especially the seniors who have played three seasons under the old coaching staff, their ability to embrace the changes and act as leaders of the program was truly amazing.”

“It’s an honor and I’m blessed to have been recognized for my play,” Powe wrote in an email. “My coaches and teammates put me in position to make plays and all I had to do was execute my assignments.”

With this season over, Wadsworth said he believes next year’s team will not fall short of expectations.

“Next year’s teams should be motivated to work hard in the off season as they prepare for 2018 campaign,” Wadsworth wrote in an email. “We were close this year, next year their goal should be to finish the season strong and bring the trophy back to College Hill.”