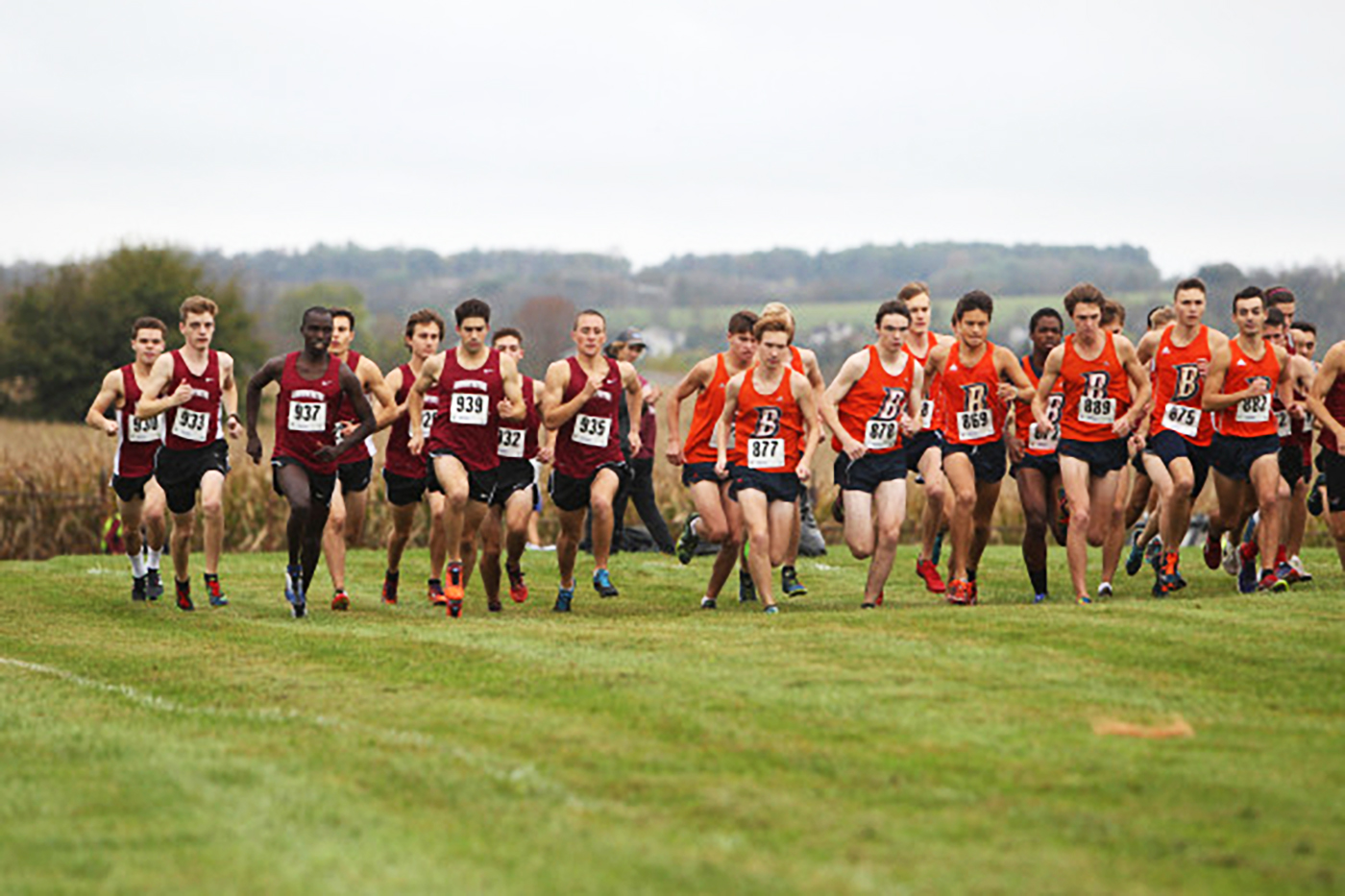 The men’s team takes off at the start of the race. (Photo Courtesy of Athletic Communications)

The cross country season came to an end with the NCAA Mid-Atlantic Regional meet at Lehigh on Nov. 10. Both the men’s and the women’s teams competed, with the women finishing in the top 25 for the second year in a row. Both teams finished ahead of close Patriot League competitor Loyola.

The women placed 22nd in their 6K, with freshman Gabrielle Galletta leading the leopards. Galletta ran a personal best of 22:06.2, placing her 99th in a field of 193 runners. Junior Emily Moore crossed the finish line next, finishing 124th with a time of 22:29.7. Lafayette placed ahead of Loyola, Seton Hall and Rider.

“This time around, I really mentally prepared myself,” senior Jennifer Salvatore said. “We had tapered for both races, so fitness-wise I think I was virtually the same. I just went into the race Friday knowing it was my last race as a Leopard. I wanted to help my team do well, [and] see what I was capable of.”

The team did more speed work, rather than heavy mileage, to help prepare the team to run faster at this meet, Salvatore added. The team had multiple personal bests, and overall improved from their Patriot League Championship meet.

“I felt just as prepared, but less pressure,” Salvatore said. “We are working every year to move up in our placement, but this race is the fun one to finish our year. I couldn’t have asked for a better distance team to finish my running career with.”

The men’s team finished 25th in the 10K, ahead of Loyola. Senior Kelvin Serem lead the Leopards, finishing 148th out of 180 runners with a time of 33:25.1. This meet was a 10K race, unlike the 8K races the men’s team has been racing all season.

“We had to mentally prepare ourselves for the longer race,” senior Matt Weintraub said. “A lot of us didn’t have any solid expectations to compare ourselves to, which I think was kind of refreshing. We were able to just go in and compete with everyone.”

Distance coach Mike DuPaul adjusted the training schedule to help prepare for the extra 2,000 meters, and emphasized recovery days to prepare the team for this meet.

“I think everyone had a better mentality of giving it their all at the District meet than the League Championships,” junior Mark DiPaola said. “We saw that the weather forecast for the district meet was going to be 35 degrees and 15-20 mph winds, so we were all hesitant in terms of how fast our times would be.”

“I think both the men’s and women’s teams really pulled it together, as several members of each team ran personal bests despite the poor weather. I think that shows how both teams were able to respond to Coach Mike’s advice and not mentally quit during the race,” he added.

This race brought the cross country season to a close. The runners now move onto their indoor track and field season, which will begin on Dec. 8 at the Fast Times Before Finals meet hosted by Lehigh.

“I’m excited to see what my teammates and I can accomplish in indoor track,” Weintraub said. “We all have a solid mileage base to work from and I was proud of the season we had overall, so I think we’re all ready to build upon that strong base, start adding in some more speed work and see what we can do on the track.”

“We’re looking to continue moving up in the Patriot League standings as a team and to bring Mundy back to Lafayette with a Laf-Lehigh win. And of course, I hope to end senior year on a high note with some personal bests,” he added.