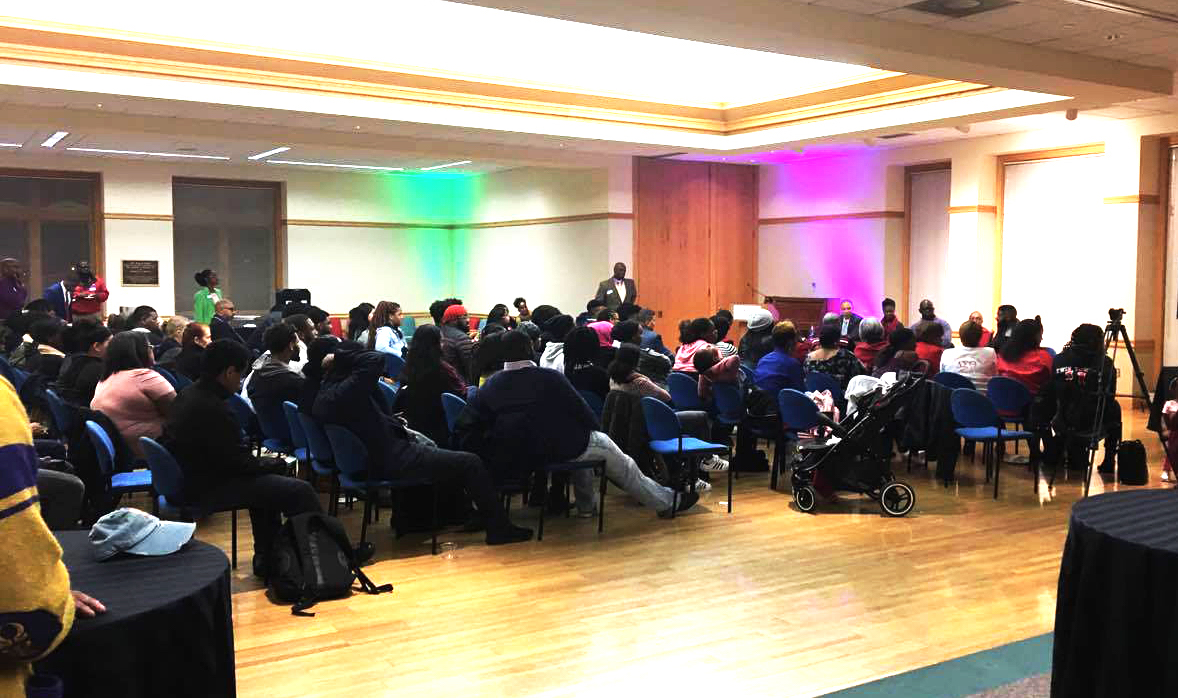 During a time when Lafayette students are voicing interest in forming a multicultural Greek chapter, Dean of Equity & Inclusion Chris Hunt said he saw an opportunity to discuss how to improve inequities in the educational system. Coincidentally, the panel discussion Hunt worked to put together at Lafayette helped those students learn more about those fraternities and sororities.

Lafayette students, high school students and parents came together Wednesday night to hear from a panel of members of multicultural Greek organizations, in an event known as “Meet the Greeks.”

Panelists, all members of multicultural fraternities or sororities, spoke on how to overcome barriers as a first and second generation college student of color attending and applying to a predominantly white university. They discussed how joining a multicultural Greek organization can provide lifelong connections.

“[Meet the Greeks] is sort of convergence of those two things…how do we as members of this community and in Greek life improve our neighborhoods, and it turns out that I have Lafayette students who are interested in learning more about these organizations,” Hunt said. “Meet the Greeks” was sponsored by the Office of Intercultural Development and the Office of Fraternity and Sorority Life.

“It’s about which organization can I serve for the rest of my life,” panelist and Kappa Alpha Psi fraternity member Ricardo Hall said. Vivian Robledo-Shorey, a panelist of Chi Upsilon Sigma National Latin Sorority, agreed that choosing an organization is like being able to choose a family.

Hunt, a member of Omega Psi Phi, said that something that makes multicultural organizations unique is their presence in their members’ lives after graduation. He himself was only initiated into his fraternity in his 30s. Omega Psi Phi is a member of the National Pan-Hellenic Conference (NPHC), which is made up of historically African-American organizations.

Twenty-five students have expressed interest in forming a chapter of a multicultural sorority at the college, with efforts spearheaded by Nina Milligan ’20.

Yasir Thomas ’20 and Charles Evans ’19 both said that they left the panel discussion interested in the idea of joining a multicultural organization and wanting to learn more.

“I think it was a very rich talk. It’s very rare to see this many black folk in a room at Lafayette. It’s great the older generation is trying to instill some necessary lessons in the younger generation,” Evans said. “I think a big problem in our community is recognizing there is life beyond where we’re currently at. Education is key, but education doesn’t necessarily have to be the end. It can be a means to the end.”

Hall and Alpha Phi Alpha member and panelist Tyrone Russell both emphasized the importance of getting to a place of comfort as a student of color at a predominantly white institution.

Russell spoke of his experience at Colgate University, where he was unsure of himself for the first two years of his time but eventually became comfortable there, “put [his] feet up” and decided that “they were going to hear what [I] had to say.” Hall told the crowd that no one should feel like they “have to tip toe around like guests” at their school, because “you deserve to be here.”

Hall said during the panel discussion that it is important for multicultural fraternities to distinguish themselves from Interfraternity Conference organizations.

With the recent death of a pledge at Florida State University leading the university to shut down Greek life, along with more hazing deaths elsewhere over the last few years, Hall said that it won’t be long before the government finds it necessary to legislate the activities of Greek life.

Organizations in the NPHC could be “swept up” with potential legislative action, Hall said. Before this crackdown happens, he added, they must distinguish themselves.

“When you talk about alcohol abuse, sexual assault, student deaths, you’re talking about IFC fraternities,” he said. “There is a doomsday clock” counting down to the undoing of fraternity life, “driven by IFC fraternities.”

He added that no organization should think they are immune to this doomsday clock.

Although the panelists discussed issues related to Greek life, they also touched on ways high school students could prepare to go to college. They suggested cutting costs by applying to scholarships from all kinds of Greek organizations and being weary of piling up student debt. Much emphasized were the resources the internet has to offer in terms of informative videos on how to get started with college applications.