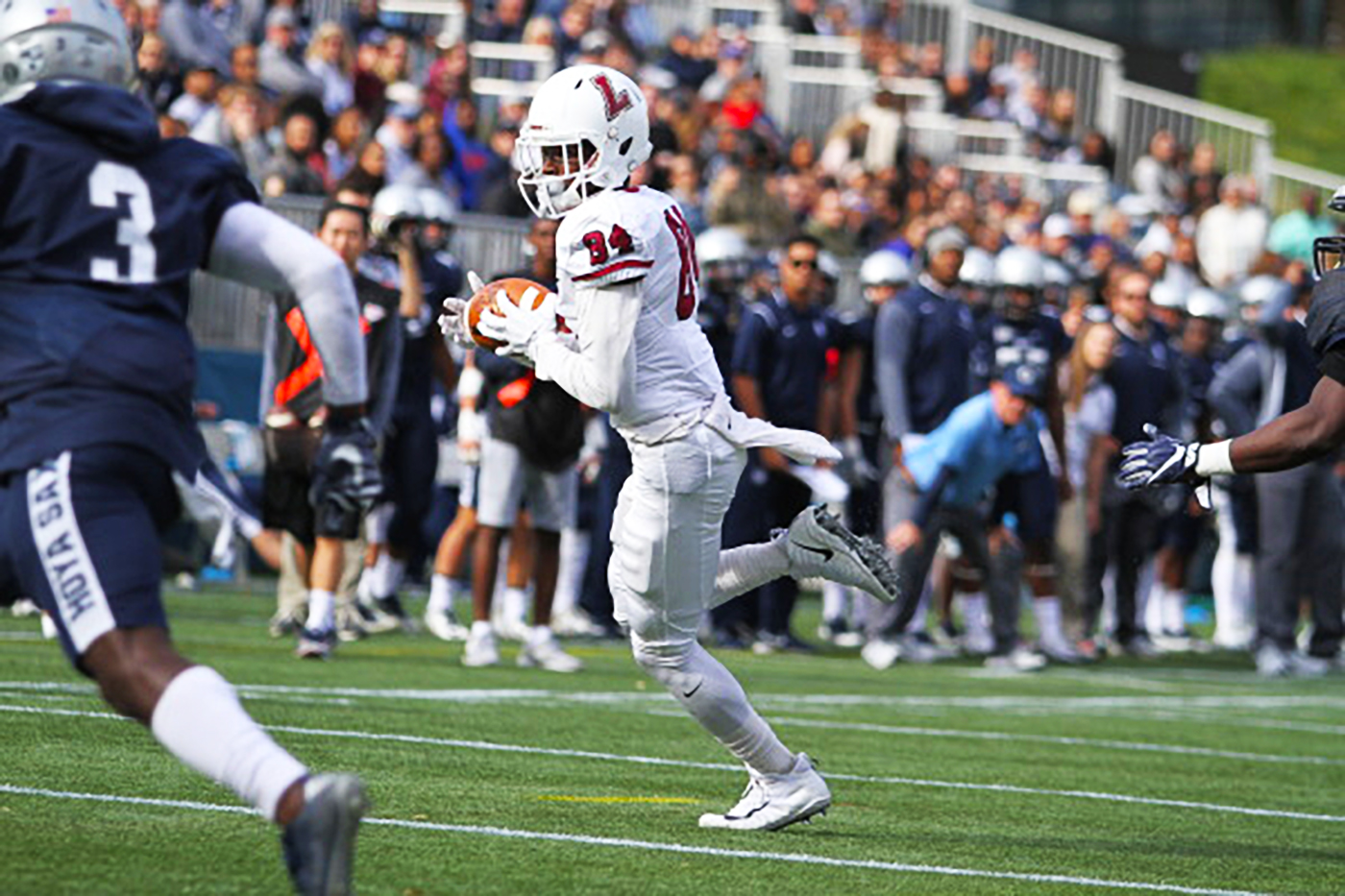 Sophomore Nick Pearson scored the winning touch down for the Leopards.(Photo Courtesy of Athletic Communications)

For the second straight game, the Lafayette offense scored one touchdown and the defense earned a shutout. This time, the Leopards earned a true shutout, with a final of 7-0 and four interceptions from the Leopards defense. Freshman quarterback Sean O’Malley had no turnovers against Georgetown during the Nov. 4 victory, after giving up two pick sixes in a loss to Bucknell the week before. His lone touchdown pass was an 11-yarder to sophomore WR Nick Pearson.

“Immediately from this Georgetown game what I liked was how [O’Malley] took care of the ball,” head coach John Garrett said in a press conference. “He was 17 for 25 with no turnovers. That was really the difference in the game. Their quarterback turned the ball over. Our quarterback did not. He made some good decisions with the ball that enabled us to remain in the game and not let it blow up in their favor. They don’t seem like big plays but those decisions are really key.”

“[Our] defense really shined,” Garrett added. “[They] made it really hard for Georgetown to move the ball.”

Freshman punter Michael Turk averaged 44.7 yards per punt in the game to help the Leopards win the field position battle.

“We had a great advantage on special teams with our punter,” Garrett said. “Winning all those hidden yardage and backing them up and making it harder for them to drive the ball.”

All three field goal opportunities were missed by freshman kicker Jeffrey Kordenbrock, depriving the Leopards of points early on.

“We felt that we were more in control of the game than the actual score indicated,” Garrett said. “We were really close on a few plays that could have blown the game open.”

With junior kicker Jacob Bissell still injured, Garrett said he has confidence that Kordenbrock will get back on track shortly with more practice.

The Leopards are averaging under 10 points per game, but Garrett said the team is a work in progress.

“I don’t know if it’s a piece missing as far as talent or anything like that,” Garrett said of the offense. “Just executing consistently and finishing plays. I think that’s the biggest thing. We’re really close.”

The Leopards hope to put it all together when they face Colgate at home on Nov. 11. That will be their last game before they end the season with the 153rd annual Rivalry Match at Lehigh. With a win in both games, the Leopards can finish atop the Patriot League standings.

Pingback: Why Lafayette will win the 153rd Lafayette vs. Lehigh rivalry game – The Lafayette