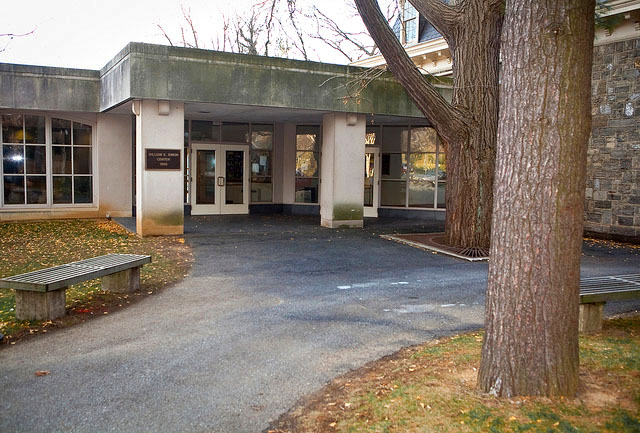 Simon Center is one of the buildings undergoing an assessment, partly for ADA compliance. (Photo courtesy of Lafayette Flickr)

Lafayette’s hilly topography and old architecture is nothing new. Recently, however, the college decided to reevaluate three buildings on campus in the hopes of making them compliant with the Americans with Disabilities Act (ADA), Vice President of Finance and Administration Roger Demareski said.

ADA is a 1990 law that prohibits discrimination on the basis of any kind of physical or mental disability, meaning that accommodations under this law come in many forms.

Van Wickle Hall, Simon Center, Hogg Hall and Pardee Hall are currently undergoing Facilities Condition Assessments, which judges a building based on certain standards for accessibility, air systems, roofing and more. Pardee is already ADA compliant and is not being reviewed for accessibility. These assessments are being conducted by Alma Architecture and Gittings Associates.

The goal is to be finished with these assessments by the end of the spring semester, and for the budgets for these renovation projects to be worked into the college’s capital plan for the near future, Demareski said.

Adrienne McKinney of Alma Architecture said these assessments are allowing the college to make small but important improvements, such as changing door hardware that would allow for more accessibility.

“The college is being proactive…as [it] projects forward on the buildings that will have renovations [it looks] to address accessibility issues in general,” McKinney said.

The current handicap-accessible residence halls on campus are Fisher East and West, Kamine, Rubin, Keefe, South College, Grossman House and one unit in Watson Courts, according to Director of Residence Life Grace Reynolds. However, nearly all of those are downhill, most likely necessitating the aid of a public safety officer to get up to the main part of campus.

Public Safety has a list for students who require transportation around campus for medical reasons. Director of Public Safety Jeffrey Troxell said students on this list are mostly those who have experienced injuries that inhibit mobility temporarily, but some arrangements in the past have been permanent.

Throughout a series of renovations in recent years, some other older buildings have been brought up to ADA compliance.

The college recently made Markle Hall more accessible, by creating barrier-free parking and paths, as well as adding ADA compliant bathrooms and an elevator.

“We believe that all students, faculty and staff should be able to see the president, the provost, pay their bills, etcetera,” Demareski said.

Many academic or otherwise important buildings are not ADA compliant simply due to their age, Demareski said. However, all college buildings constructed since 1990 are ADA compliant, including Farinon, Oechsle Center for Global Education and Buck Hall.

When addressing renovations for ADA compliance, there are certain areas looked at first to maximize investments and improve accessibility.

“What you’re doing with existing buildings is always taking every opportunity you can to upgrade key portions,” Gitting said.

While buildings are being evaluated and renovations are underway, Demareski said the process is relatively slow.

“The [renovations are]  significant investments. We’re going to make them but they don’t happen overnight,” Demareski said.