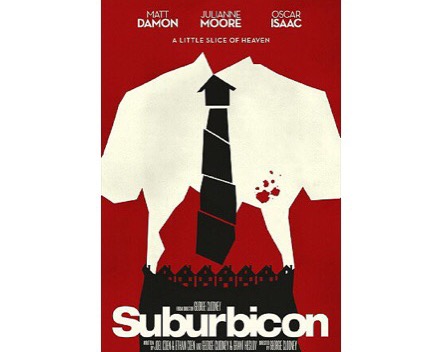 Joel and Ethan Coen have given us quite a few gifts: the iconic “Fargo,” the chilling “No Country for Old Men” and the outrageously underrated “Burn After Reading.” Their latest screenwriting effort, however, directed by their friend and often-star George Clooney, isn’t one of those gifts.

“Suburbicon,” starring Matt Damon and Julianne Moore, revolves around hapless sociopaths in an unsettlingly idyllic suburbia in the 1950s. After a home invasion and murder rock the town of Suburbicon, the body count continues rise, alongside the escalation of a Jim Crowe-era riot just down the block.

Just like the other glimpses into the Coen Brothers’ world, “Suburbicon” is filled with botched criminal shenanigans and dark humor, but the similarities to their much more successful efforts end there. So much of the film is poorly executed that it’s difficult to know where it truly went wrong. Inexpert screenwriting out of this dynamic duo is surprising, but “Suburbicon” is overwhelmingly amateur in a number of ways.

The pacing is slow and frustrating, cultivating a plot that is only minimally satisfying. The humor is certainly there, but also poorly delivered more times than not, indicative of what can only be described as lazy casting.

Aside from the flat jokes, the delivered performances are OK enough. All the actors are seasoned enough that it’s difficult for them to be genuinely bad, but the only true scene stealer is Oscar Isaac as an opportunistic claims investigator. Isaac’s scenes serve as a brief glimpse into what Coen writing is truly capable of, but the window is shut almost as soon as it’s opened.

Finally, the film just seems unsure of what it truly wants to accomplish, awkwardly lumping together two entirely different messages. The first is classic Coen Brothers: simply that it’s fun to watch pathetic losers lose pathetically, and, moreover, violently. The second is an underutilized, more promising and much heavier historic racial commentary. The two narratives never quite connect.

Ultimately, “Suburbicon” is a disappointingly average attempt from a talented team. The Coens have had much more success setting up and nailing their own punchlines in the past, and passing the directorial torch to Clooney was a mistake, although he’s been an on-screen asset for them many times. “Suburbicon” feels like a high school film project by a pair of teen Coen-idolizers, rather than a product of the real team.

A shockingly more impressive and hilarious hour and a half can be found in the form of virtually any other of the familial team’s releases. “Hail, Caesar!,” and “The Big Lebowski” are two more. “Suburbicon” is an uncharacteristic dark mark on an otherwise impressive filmography.

View all posts by Kirsten Dahl →