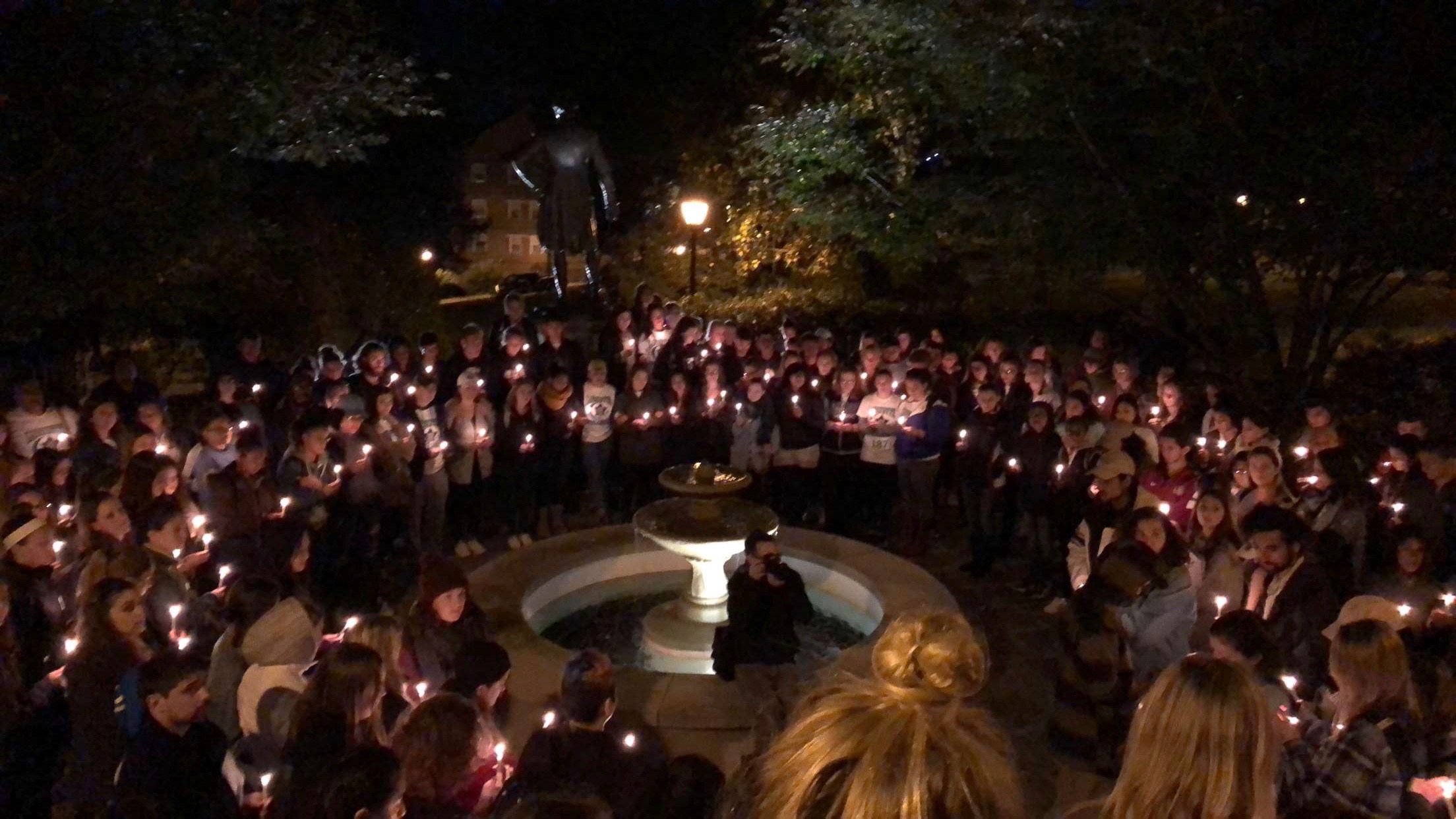 A candlelight vigil was held after Gordon Braxton’s talk. Survivors and their friends were invited to come forward and share their story. (Courtesy of Nahin Ferdousi ’19).

The Lafayette community came together to take a stand against sexual violence at Pards Against Sexual Assault’s first Take Back the Night (TBTN) on Thursday. With the idea in the works since the summer, the event was meant to challenge the culture on campus which tends to silence survivors.

Keynote speaker Gordon Braxton, a blogger on male violence prevention who has been involved with the international Take Back the Night organization, spoke before a crowd which filled Colton Chapel’s 600-person capacity. He called for men to have conversations about consent with women and for bystanders to take a stand against unethical conduct they see and support survivors of assault.

Braxton said that he knows from his experience dealing with young men on this issue, most are capable of defining consent but often are uncomfortable doing so with a woman.

“While [most young men] have great definitions of consent, they can’t ever articulate it to a partner, because that would be awkward,” he said. “As if, being accused of sexual assault is not awkward, [as if] being someone’s worst memory from their college career is not awkward.”

Kaizer Butler ’19, a member of the football team, said he took the opportunity at the talk to be a role model for the team’s younger members and for the males in the audience. That was the time to stand up and say that unethical locker room talk is unacceptable, he said.

“Understand your influence,” he said, “I’m an alpha personality, and what I say does tend to go,” he added, drawing laughter from the crowd. He added that others should use their positions of influence to shut down conversations that promote harmful attitudes.

A candlelight vigil ensued for an hour after the close of Braxton’s talk. Survivors of sexual assault and their friends came forward and shared their stories while students, administrators and others filled the courtyard of Colton Chapel.

With official planning of the event beginning in August, PASA co-director Nina Cotto ’19 and the board didn’t think it could be organized in time for the fall. When it was finally organized, board member Nahin Ferdousi ’19 fielded doubts from those who told her that it would be difficult to get even 100 people to attend.

With attendance around 600 and nearly 20 co-sponsorships, PASA outdid their own expectations, board members said. PASA set up a route for a 5k run and 1 mile walk around campus, which Cotto noted was attended by several faculty, administrators and students, and which occurred before Braxton’s talk. Going forward, they hope to set up individual programming with groups on campus and continue the conversation about sexual assault.

Cotto said Braxton approached her after the event to tell her that this TBTN was one of the best he had attended. The day after, one fraternity, Delta Tau Delta, had already contacted PASA to set up individual programming with the chapter. All Greek organizations co-sponsored the event.

“Now is the time for reflection after this powerful event,” PASA board member Reeve Lanigan ’19 said. “Hear the silence [of survivors] and see what you can do on campus.”

Cotto and Lanigan said they were overwhelmed with positive responses after TBTN. In the middle of their interview with The Lafayette, one attendee of TBTN approached to say, “That was so fucking awesome,” and thanked them for their hard work.

Leading up to the event and continuing this week, PASA has been fundraising for Turning Point, “a safe place where victims of abuse and their children can find refuge,” according to its website. Money raised comes from selling TBTN T-shirts. Because it is not legal for one non-profit to donate to another, PASA co-director Sam Arnold said, PASA will be using money raised to purchase supplies and resources to give to Turning Point.

In opening the event before Braxton’s talk, Assistant Director of Admissions Cristina Usino discussed the importance of being there for survivors between the point when a trauma occurs and when healing has progressed. It is then, between “point A and point C,” the hardest time, where support is critically needed. Usino was formerly in the Office of Intercultural Development as Gender and Sexuality Coordinator, and was of great support during TBTN planning, board members of Pards Against Sexual Assault (PASA) said.

In the absence of a Title IX Coordinator, other administration members stepped up to show support for TBTN, Lanigan said. Especially present were Dean of Equity and Inclusion Chris Hunt and Usino.

At the close of Braxton’s talk, all were invited to the candlelight vigil where anyone could share in front of the crowd. Some came forward and told their stories for the first time ever, others for the first time with the Lafayette community. Some came to Lafayette to get away from their experience, while others spoke of sexual violence at the college.

Tears were shed by many at the vigil and many spoke who said they were not planning on it. After each person finished talking, almost all turned to be comforted in the arms of a friend.

“The experience of survivors is anything but comfortable,” Braxton said during his talk. “We shouldn’t expect [bystanders’] experience[s] to be comfortable.”

Hunt said that PASA felt it was important to have a male speaker at this event.

“The respondents in these cases are oftentimes men, and victims are oftentimes women. That’s not always true, but the data suggests that,” he said. “[Braxton] wanted to speak to the men as a male, and make sure that we are mindful of consent and understand the impact that not having consent and not being mindful has on others.”

“It was the PASA group, the students themselves, who were actually deciding on whether they wanted a man or a woman to deliver this message. They thought that having a man deliver it would be a different spin,” he added.

Take Back the Night is a non-profit organization which protests sexual violence. On its website, statistics surrounding this issue are immediately presented: 1 in 3 women worldwide will experience sexual violence or intimate partner violence, 1 in 6 men will, and less than 50% will report it. Two sexual assaults have been reported at Lafayette so far this year.