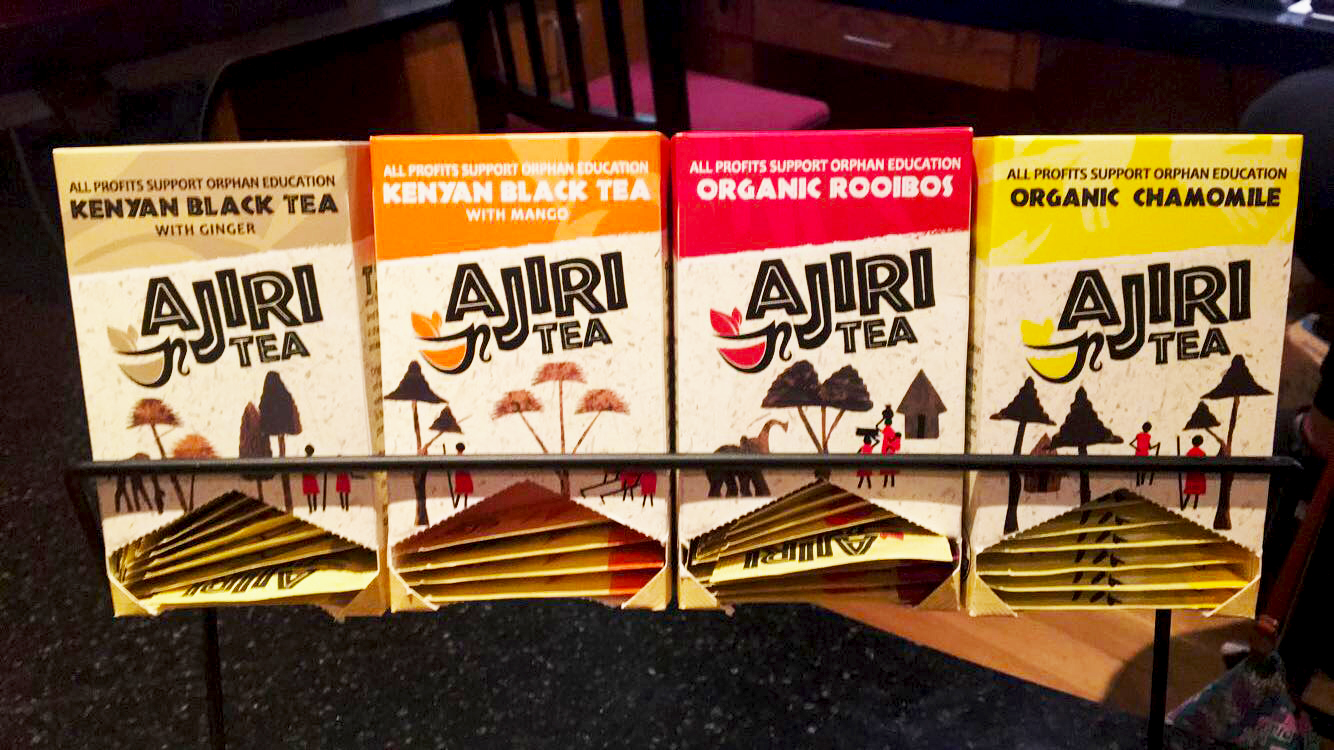 Ajiri Tea is now offered in all dining locations. (Photo by Rachel Bram ’20)

Lafayette is the first college to partner with Ajiri Tea, an nongovernmental organization whose goal is to redirect 100 percent of profits back to the people of Kenya, co-founder and CEO Kate Holby said. The partnership will likely provide funds to send two children in Kenya to secondary school by the end of the year, she added.

Holby started the company as a sustainable project to provide employment for Kenyan women after visiting the country in 2008. All the crops are grown organically in Kenya and handpicked by local women, according to the company’s website.

“‘Ajiri’ means ‘to employ’ in Swahili,” Holby said. “The initiative came to me when I visited my sister, Sara Holby, who was volunteering for an NGO in Kenya, handing out food and drugs for people with HIV/AIDS during the global financial recession. Kisii, the region where we were working in, had lots of hills, fertile land and tea cultivation. Women there made up around 70 percent of farm labor, but they were not getting paid a fair amount for all the work they were doing.”

Helping to eradicate AIDS and poverty is not Ajiri Tea’s only goal. The company also aims to create more education opportunities for orphan children.

“We have sent 30 kids to school and provided jobs for 60 women, but the ripple of the impact is greater than that. Kenya is near the equator, so it has an early sunset. The fact that women are bringing home more wages also means their children can now study at night, and that’s big thing,” Holby said.

“College marks the point when people start to have purchasing power, which is interesting because college students can actively make an influence with their decisions. When you buy a cup of tea, you’re buying a pencil for a Kenyan kid at school,” Holby said

Holby feels Lafayette has been a supportive partner, and that the school’s concern with sustainability aligns with the missions of Ajiri Tea.

“My idea of a successful business is a business that can give back to the people. When I reached out to the Director of Retail Joseph Espinosa, I can see that Lafayette is unique because it has the autonomy to source from local farms and work with small merchants,” Holby said.

Tea cultivation has been an essential part of Kisii since the 1930s. Major commodity crops like coffee, tea and chocolate are endemic with exploitation, meager pay and poor living condition for workers in the early stages of production. Assessing the prospects of Ajiri Tea, however, history professor Rebekah Pite, who received a Fulbright Fellowship to study yerba mate in Argentina two years ago, found the initiative commendable.

“The small scope of Ajiri Tea can’t transform the tea industry completely, but it is also their gradual, step-by-step approach to the issue that makes their project effective and authentic. The detailed anecdotes and hand-crafted artworks of Kenyan people on tea packages also add value to the products,” Pite said.

Holby believes in their efforts, and that children seeing their mothers going to work and providing for their families has positive implications for the mindset of Kenyan children.

“We’re not empowering anyone. What we’re doing is employing people, and they decide what to do with their potentials. We are not a Western company coming in and out. We’re here to stay in Kenya to help market a unique local product,” Holby said.

Ajiri Tea is currently available as part of a meal swipe in Lower Farinon and Gilbert’s Café. In the convenience store section of Lower, tea packages with hand-drawn artworks by Kenyan women can also be purchased.

“Try the original black tea with lots of milk and sugar if you want to drink like a true Kenyan,” Holby said.