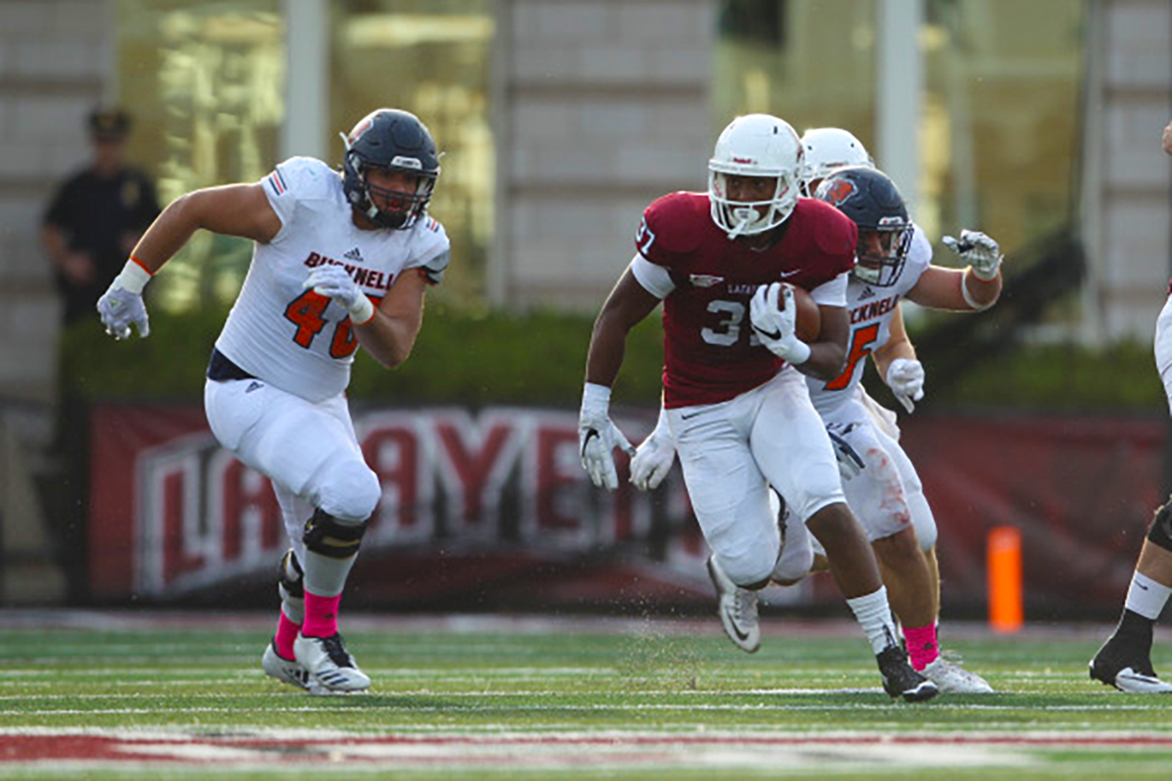 Selwyn Simpson ’21 on a carry (Photo Courtesy of Athletic Communications)

The Leopards defense let up no touchdowns in the team’s loss to the Bucknell Bison this homecoming weekend. Lafayette entered Fisher Stadium as the Patriot League leader, but fell to second at the end of the day. The crowd of more than 5,500 witnessed a closely-battled game that ended in an overtime loss, as the Leopards were defeated by the Bison 13-7.

Lafayette had the advantage in rushing yards, penalties, time of possession and third down conversions. The defense played a near-perfect game, giving up no points. Senior linebacker Brandon Bryant continued his stellar play, wracking up 17 tackles just a week after a 19 tackle effort against Harvard. The offense failed to muster up more than a single touchdown against a formidable Bucknell defense, however, gaining only 186 total yards of offense in the course of the game.

It was a defensive battle from the start between the two teams, with the only score of the first half coming on a 31-yard pick-6 early on by the Bucknell defense. The Leopards bounced back with a reliance on their ground game and tough defense, chewing up clock with long runs and short completions. Junior running back C.J. Amill and freshman running back Selwyn Simpson formed a solid foundation, with long runs of 24 and 19 yards, respectively, on the Leopards touchdown scoring drive.

With just under eight minutes left in the 3rd quarter, Simpson was able to convert a goal line run into a score, and the extra point tied the game up.

The Leopards offense struggled afterward. Freshman quarterback Sean O’Malley, constantly hounded by Bucknell’s defensive line and tight coverage, threw for only 90 yards the entire game. The defense continued doing their job, keeping Bucknell off the scoreboard after the first defensive touchdown. The Bison had a chance to put it away in regulation, driving down the field while eating up nearly 9 minutes of game clock before attempting a 42-yard field goal. The kick ended up missing short, sending the game into overtime.

Lafayette got the ball first in the overtime period. On the first play O’Malley threw an interception, which was returned for a 95-yard touchdown, sealing the win for Bucknell. Head Coach John Garrett claimed that it was a “hard fought game” and that he was “proud of how hard the guys worked and performed.” He added that “the difference in the game was obviously the two interception returns for touchdowns,” and other than that the team stepped up; this is a correctable issue.

Lafayette heads into Georgetown on November 4, where they look to put this loss behind them.