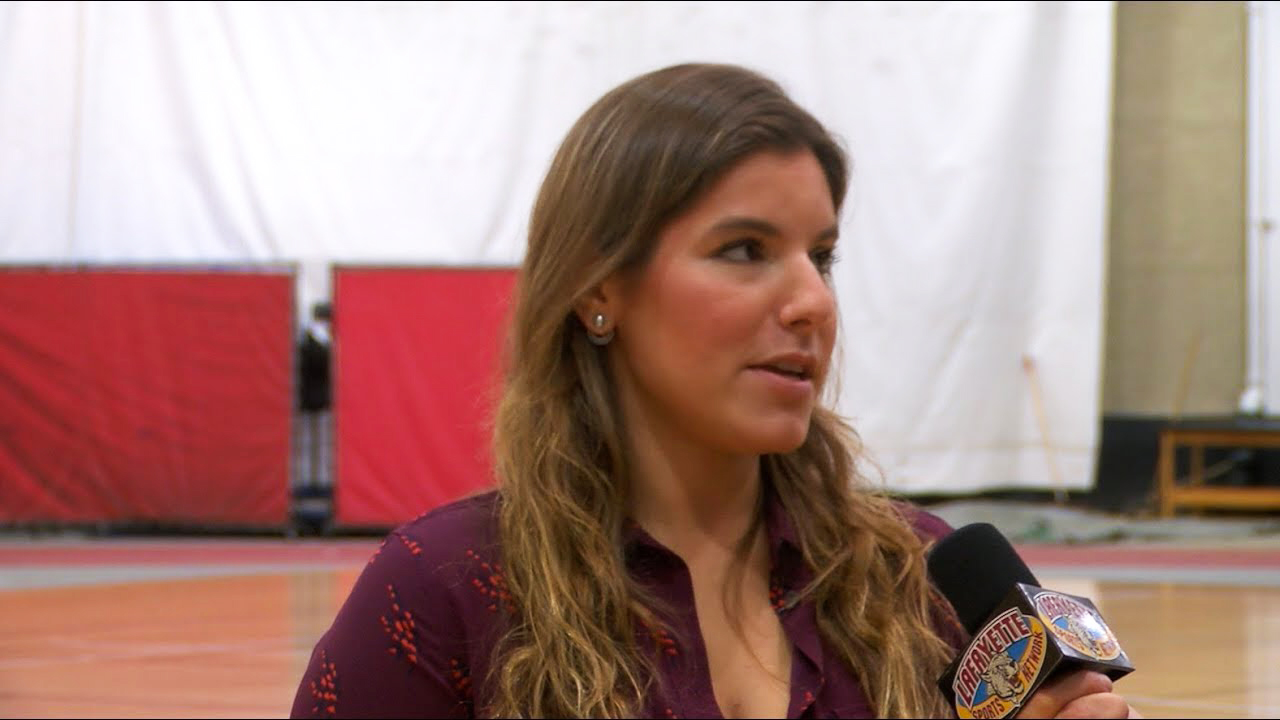 After one season spent as an assistant on the Lafayette fencing coaching staff, Natalie Kolasa is now the head coach. She said she draws her fencing expertise from years of experience, some of which was in a program not unlike Lafayette’s.

“When I was [on Rutgers University club fencing], for a while I was the only girl practicing with the guys, and the coach still expected me to work as hard as them, and knowing that I could is what drove me during practices. I expect the team to work hard, because you can always work harder than you think, and I’m here to push them.” Kolasa said.

Lafayette remains a co-ed program, but more women continue to join, she added.

“We’ve been growing the women’s team. We have 4 women freshman fencers, which is a big deal because last year we only had about 3 women on the team, so we’ve almost doubled in size,” Kolasa said.

A former captain of the Rutgers Club fencing team, Kolasa said she’s applying her past experiences in her new role.

“Being captain of the team taught me a lot of leadership skills,” Kolasa said. “I was constantly teaching people of all different levels as one of the more experienced people of the team. It was a club team, so we had to be responsible for a lot of the fundraising and for organizing our own events, so it was a lot of responsibility.”

Kolasa’s experience of being an assistant coach last season, she said, helped her transition to head coach.

“I got to work under the former head coach Jarrod Rottau and the other assistant coach Tom Gauntner who was the head coach before Jarrod, so I got to learn from two coaches who had years of experience,” Kolasa said. “Coming in as an assistant coach without the responsibilities of being a head coach allowed me to really learn.”

“We had a high coach turnover which made us lose some people, and in general the coaching side has been a little weak, which reflected on the team,” McQuillen said. “Having her on the team last year allowed her to identify those problems and be able to cater her coaching style to what we needed.”

McQuillen said Kolasa has increased discipline among the team.

“She’s been really stressing the importance of making it to practice on time, how to get that competitive edge when we go to meets, which comes in not being sloppy when it comes to footwork, bladework, precision and being careful,” McQuillen said.

McQuillen noted that there have been many changes since Kolasa took over as head coach.

“We’ve gotten new uniforms which boosted team spirit. We now do a pretty regimented practice in physical conditioning,” he said.

“Her coaching style is definitely reasonable, but also strict. Discipline is something a lot of people felt our team was missing and she’s been definitely providing that.”

Unfortunately, Natalie Kolasa has consistently failed the Lafayette Fencing Team. May it be being 30 minutes late for meets and practices, being on her phone when she should be coaching, or disrespecting her athletes, Coach Kolasa is not a good fit for this team.

The above comment is patently untrue and was clearly written by a FORMER member of the team who is clearly unhappy with the changes that were made to make the team successful. The team is in a clear direction for the first time in my college career and there are literally no other teammates who feel the same as you. Go Troll somewhere else.

Very disappointed in this “coach”….. disrespects her athletes, completely unprofessional, and VERY impolite to parents

Interesting that this “parent” feels that way. Likely that same student who fucked up the team who commented here first but is pretending to be a “parent”. We now for the first time ever have a parent organization which was created by Coach Kolasa. We finally have donations now. Keeping trying to Troll