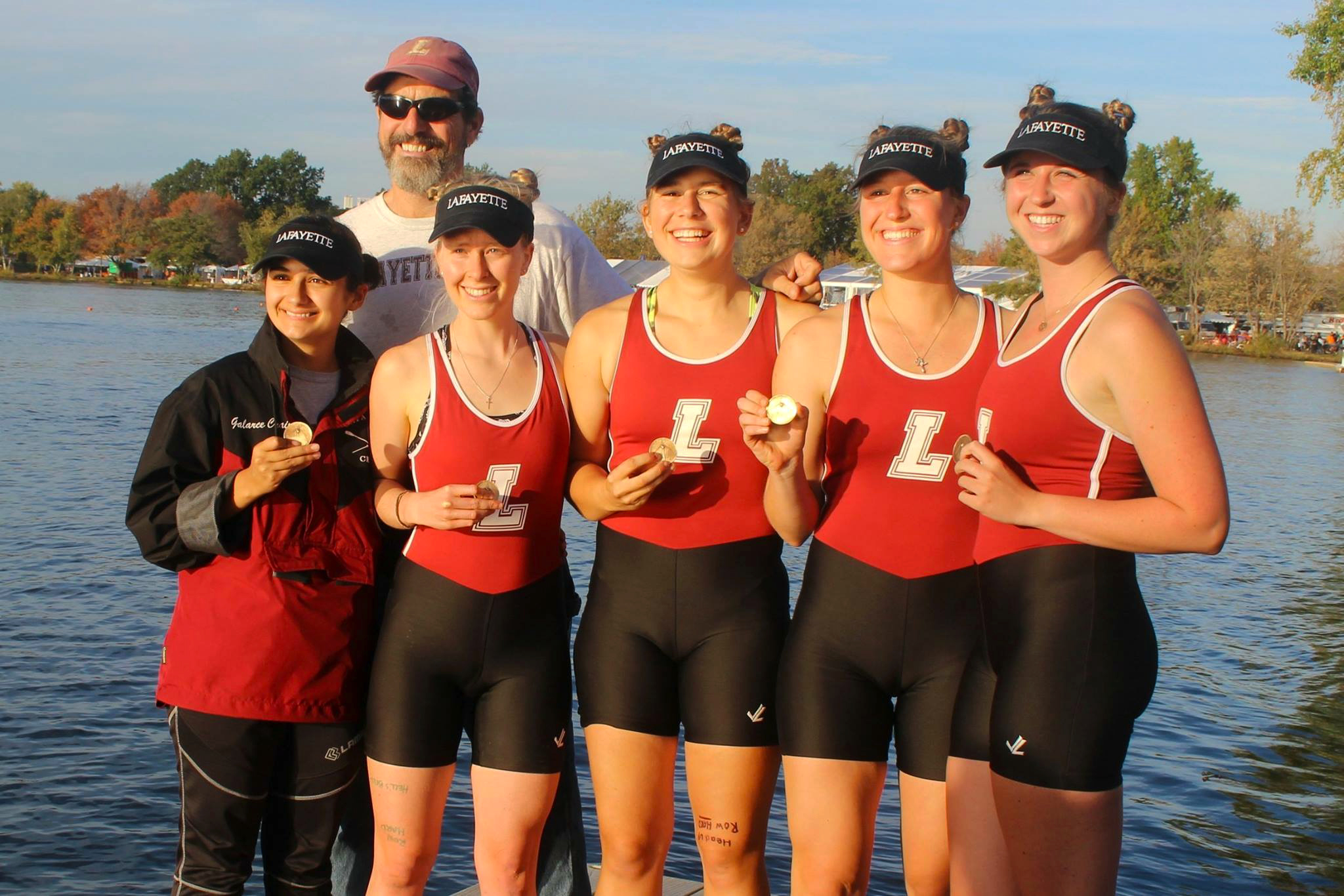 At the largest 2-day regatta in the world, up against division I programs, Lafayette women’s club crew 4+ team left with a 2nd place medal.

After winning the National Club Championship and other regattas in the 2016-2017 season, the team earned a bid to row in the Head of the Charles Regatta. The team of senior Emily Smith, junior Nicole Harry, junior Rachel Marbaker, senior Carolyn McDonough, and senior coxswain Teresita Galarce Crain went to Boston for the Oct. 21 and 22 competition.

“When I found out we finished second, my first reaction was just overwhelming shock and pride,” the club’s vice president Nicole Harry wrote in an email. “We had just come in second place at the largest regatta in the world. A club program that no one knew a year ago is now drawing attention at the national level.”

“I was so so proud to be in a boat with those girls, we all just started hugging and crying, as all the work, sacrifices, and effort we had put in over the past 6 months had payed off into something beyond amazing. We came in feeling good and knowing we had a shot of doing well, but with no expectations, so finding out we got second was just an overwhelming rush of emotion,” she wrote.

For club president and Boston native Emily Smith, just going to the regatta was a dream come true.

“This became the dream when I first joined the team because, being from Boston, even if you don’t know about rowing, you know about Head of the Charles because it’s such a big thing,” Smith said. “It was such a huge experience because I had my parents, my siblings, my entire neighborhood and my grandparents finally able to see what I do because it was in my hometown.”

The 2nd place finish was the result of months of hard work by all of the team members.

“I studied for this for months,” coxwain Teresita Galarce Crain said. “I watched tons of videos of other coxswains doing it, I memorized the map, I read the analysis of US national team coxswains, and I went to a two-hour-long coxswain clinic once we got to Boston to talk through it as well.”

“This race meant so so much to our boat,” Harry wrote in an email. “Since our win at [American Collegiate Rowing Association National Championships] last spring, we have had tunnel vision towards the [Head of the Charles]. We’ve given up time at home with our families, mornings preferably spent sleeping in, and so much emotional, physical, and mental energy for this, and to have it pan out the way it did is beyond imaginable.”

The team was slated to start 30th out of 36 boats, with each starting fifteen seconds after the last. To earn their position, the crew had to pass the boats in front of them.

“The best part of the race for me was the fact that we were passing boat after boat,” Galarce Crain said. “We passed over 7 boats. It was great to feel the energy of all the people and the announcers as we were passing by.”

As the team approached the Weeks Bridge, they ran into trouble. With five other boats in a space only two boats wide, they crashed as they tried to keep their outstanding pace.

“Two of the boats in front of us crashed and stopped,” Galarce Crain said. “Another boat had to slow down in order to not hit them. The fourth boat tried to go around them, but since we were gaining on them, they had to yield to us. That was the boat that ended up crashing into us. The fifth boat we passed going into it.”

The team’s persistence and hard work helped them make up the time lost from the collision.

“Up until about the halfway point, we were 2 seconds ahead of UNH, who got first,” Galarce Crain said. “After the crash, we were 7 seconds behind. By the end of the race we were only three seconds behind.”

“We really made up time,” she added. “The girls really responded to everything I wanted them to do. We were on the inside for the rest of the race. They brought the intensity back up and that’s what got the medal.”

As the team finished the race, they didn’t know yet what place they were getting.

Having achieved a top position at the regatta, the Lafayette Women’s 4+ will get an automatic bid to race in the Head of the Charles again in 2018.

“Knowing we have an automatic bid is amazing, to start with,” Harry wrote in an email. “We worked so hard to be able to race this year, that knowing we’re able to race again without there being questions of our abilities is fantastic.”

“It’s a little melancholy though, as three of the girls in our boat are graduating this year,” she added, “so I know that the 2017 race was a truly once in a lifetime experience, and a culmination of all our past achievements and hard work together. I am excited that other members from the team will get the opportunity to share the Charles experience, but it’s a bit of a bittersweet excitement.”

On Oct. 28, the team will race in the Head of the Schuylkill Regatta against teams from the eastern Pennsylvania region. The team is not taking anything for granted.

“The big thing about our boat is we’re always going to put the work in,” Smith said. It’s not like we’re gonna take it easy just because we did well at the largest regatta in the world.”

One big takeaway from the Head of the Charles is that the Lafayette Crew Women’s 4+ is a force to be reckoned with, she added.

“What we’ve learned is people know our name now, which is definitely something new,” Smith said. “It’s great feeling that people have a level of respect that wasn’t there before.”