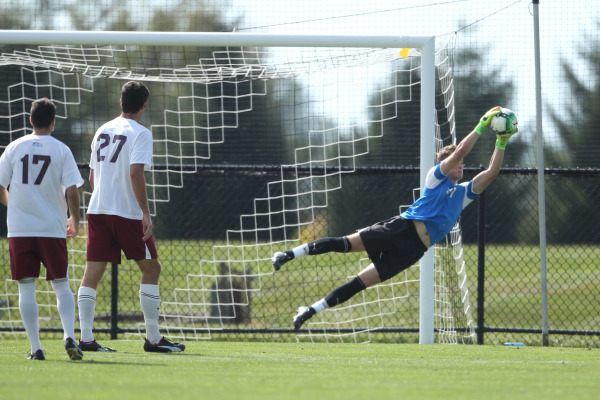 Both the women’s and men’s soccer teams squared up against Lehigh on October 14th in a rivalry weekend for Lafayette soccer. Both teams fell short against the Mountain Hawks, each in well-fought 2-0 defeats.

On the women’s side, the Mountain Hawks scored their first goal in the 29th minute. After that, the game was scoreless until the 86th minute, where Lehigh put the game away with another shot into the back of the net. The Leopards were not without their fair share of chances, however. They had multiple opportunities to push one past the Lehigh keeper, culminating in a penalty kick in the 83rd minute of the game. Junior Lauren Johnson stepped up for the Leopards and put it on target, but Lehigh’s keeper Sam Miller made a diving save to keep Lafayette off the scoreboard.

“[The penalty kick] was upsetting because I knew it could be a game changer,” Johnson said. “The goalie had a really good save. We had a bunch of other chances, and obviously they didn’t go our way. I wish I could have capitalized on the penalty, but I give the goalie a lot of credit for her save.”

The men’s team played an equally close game against Lehigh, with the first goal by Lehigh coming in the 61st minute. Nine minutes later, the second goal was scored. The Leopards were in it until the end though, with shots on goal after corner kicks in the 11th, 85th, and 87th minutes. Two of the four shots on goal in the game came from sophomore forward Evan Vare.

“I think the biggest thing was the fact that we didn’t execute our final passes and final shots,” Vare claimed. “We did everything right to get into scoring opportunities, but we were unable to step up and put one away.”

The men have had a consistent scoring issue this year, getting shut out in seven of eleven games, but Vare said he believes that the team can turn it around to make Patriot League playoffs. Defensively, senior keeper Brad Seeber made five saves to give the Leopards a fighting chance as the game progressed.

Both soccer teams have playoff opportunities to steal one back from the Mountain Hawks.