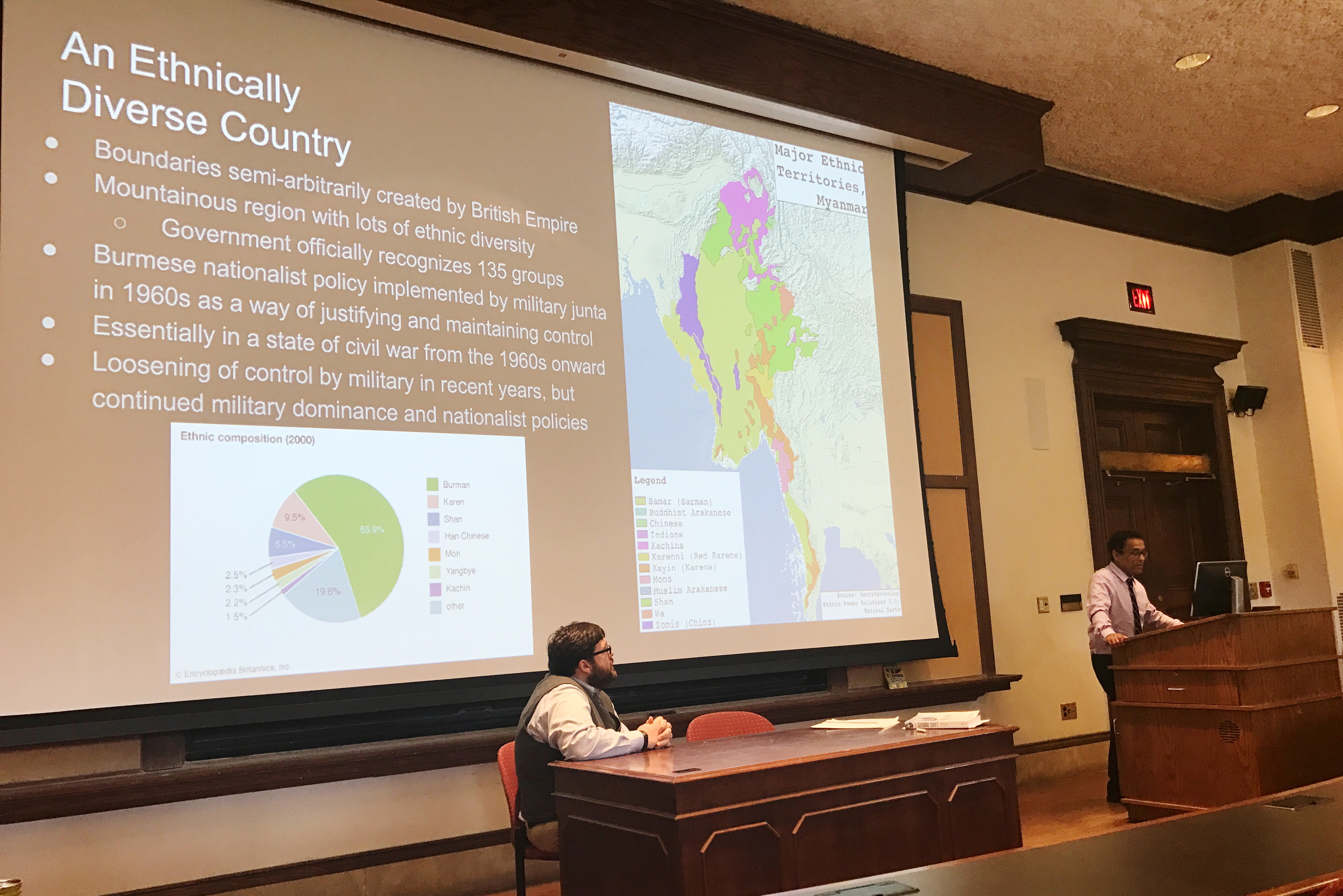 Muhlenberg College political science professor and Bangladesh native Mohsin Hashim came to the college to bring an expert perspective to the problems and circumstances of the Rohingya crisis, an ongoing military breakdown of the Rakhine state in the Southeast Asian country of Myanmar. More than 500,000 Rohingya people have fled persecution and destruction in what the United Nations described as “a textbook example of ethnic cleansing,” according to BBC.

Muslim and Hindu Rohingyas make up the majority of the area, which is separated from the rest of the country by a mountain range.

“What I hope this generates is students extending their boundaries of justice and their global conscious so it matters to them what is happening in the distant corners of the world,” Hashim said.

International affairs professor Caleb Gallemore, who also participated in the lecture, explained that the country passed a nationalist policy that denied Rohingyas citizenship in the 1960s and has essentially been in a state of civil war since then.

“Of the approximately one million Muslims that were residing in Rakhine in January 2017, only about 4,000 of them are recognized as citizens,” Gallemore said.

This policy, along with resource and ethnic diversity issues that exist in the country, were the catalysts for the 2012 and 2017 uprisings by Rohingya insurgents that led to many Muslims being killed and their homes destroyed by the Myanmar army and police, according to Gallemore.

“In 2012, the government burned 8,600 homes, 85% of which were Muslim homes,” Gallemore said. “This was a very clear policy by the government of trying to wipeout the population.”

During the talk, Gallemore, Hashim and students discussed how little this issue is brought up in the media, which is why the International Affairs Club decided to bring this event to campus.

“This is an issue that is horribly under reported in the U.S. news media, so we wanted to bring a perspective from an expert on the issue so it could be brought to light within the Lafayette Community,” President of International Affairs Club Emily LoPiccolo ‘18 said

Hashim brought several new outlooks on the issue in his home country, such as the effects of government concentrated fires in the Maungdaw District, which is 90% Muslim and home to 71% of the Muslims in Rakhine. Since then, 600,000 of them have fled to Bangladesh where they are living in makeshift settlements, camps or host communities Hashim said.

“I don’t think these refugees will be going back to Myanmar,” Hashim added.

The Nobel Peace Prize winner and democratic Minister of Foreign Affairs in Myanmar, Aung San Suu Kyi, has been criticized for her lack of action on the situation, according to Hashim.

“She is walking a tight rope,” Hashim said. “She figures that if she quits no one will carry the democratic banner, but in the global community she already has blood on her hands.”

Although this issue isn’t at the forefront of people’s minds in the US right now, Hashim feels it may directly affect the country in the future.

“I hope that we understand conflicts and dependence in ways that if we ignore this crisis it will greatly matter to us soon,” Hashim said. “It is not just to be human, it is to be strategically invested in the well-being of groups who are way beyond our immediate vicinity.”