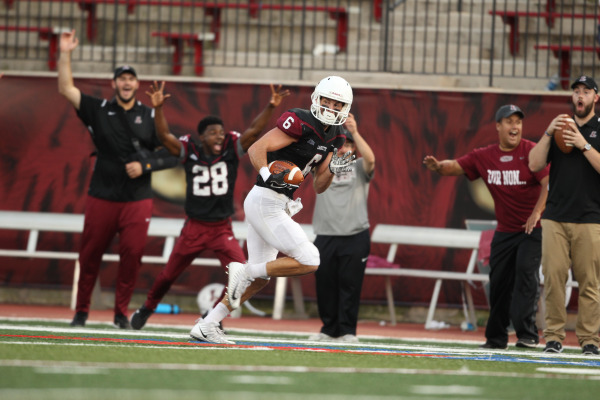 The Leopards fought through a tough home matchup against the Fordham Rams, coming away with their second straight Patriot League victory. The Leopards recorded negative net yardage for the fourth time this season. The win marks the first time Lafayette has won two in a row since the fall 2014 season.

The Leopards didn’t score until 13:33 left in the fourth quarter, but managed touchdowns on two of their last four possessions to win 14-10.

The Lafayette defense stole the show at Fisher Stadium. Along with the interception, they forced four turnovers on downs, three of which were in the second quarter. Senior linebacker Brandon Bryant earned his second straight Patriot League Defensive Player of the Week award with a team-leading 15 tackles. He recorded one sack and a fourth down tackle.

“They had great concentration and [were] very intent on doing their job in every situation and showed up when we executed in critical situations,” head coach John Garrett said in a press conference.

After giving up a field goal to go down 10-0 in the third quarter, the Leopards marched down the field for 81 yards. Senior WR Rocco Palumbo made the touchdown catch on a 4-yard pass from freshman QB Sean O’Malley.

Two Fordham drives later, the Rams were threatening at the Lafayette 33-yard line. Phil Parham stepped up and made an interception at the 12-yard line.

The interception proved to be costly for Fordham. Five plays later, O’Malley connected with Palumbo for a 63-yard touchdown. Palumbo had 129 yards on the day.

The Leopards hope to keep the winning streak alive as they play their final non-conference match at Harvard University on Saturday, October 14th.