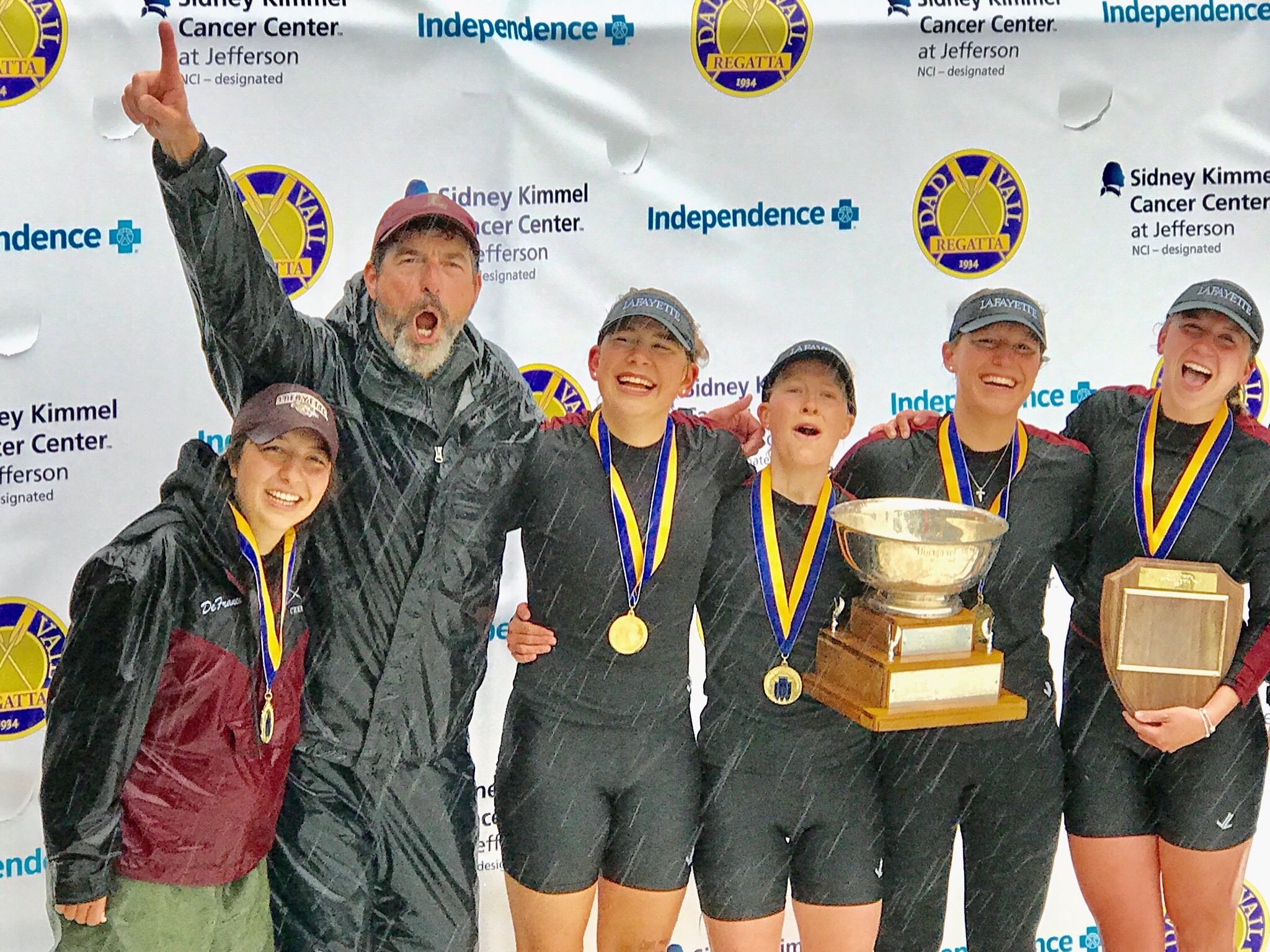 This week The Lafayette takes a timeout with crew club president Emily Smith.

Kathryn Kelly: You get to row in the head of the Charles Regatta. How is the team preparing for that challenge?

Emily Smith: It’s in 25 days as of today and we are unbelievably excited. Basically we’re doing morning practices every other day. It’s two hours on the water at least every single day, six days a week and then we’re actually staying over October Break, like Columbus Day weekend. We’re going to be staying that weekend to make sure we can get as many hours on the water as possible.

KK: So your team won the Dad Vail Regatta and the national championship last season. What was the overall experience like?

ES: It’s honestly indescribable. There’s a picture of us when we crossed the finish line at the Dad Vails and we’re all just like, sobbing. You cross the finish line and it hits you that these thousands of hours that you’ve put into training to reach this goal and you were actually able to attain it. It’s the best feeling I’ve had in my life.

KK: How is the team working to create the same chemistry with the newcomers?

ES: Rowing is tough when you first get into it just because a lot of people have no idea what they’re doing, so we try to make sure everyone’s friends; we invite everyone to team dinners. You can get on the water and it can be really frustrating but we want to make sure that when they’re off the water that the team is their family. We’re all friends; we all eat dinner in upper together. Those kind of things, until they figure out how to actually row, and then they learn how to enjoy that experience as well.

KK: Do you have a specific routine that you do before each competition?

ES: I’m a little different from everyone else. I’m kind of a dancer, so when we’re rowing up the starting line and I get that adrenaline, I just start dancing in the boat. To my boat mates, they’re like ‘we wouldn’t know how to start a race if Emily doesn’t do her dance right before we start.’ Another thing is once we get start to get up the starting line and it gets more serious, we’ll make sure we do a fist bump. We’ll send it down the boat then send it back up.

KK: How did you personally first get into rowing?

ES: I did track in high school and I ran the 400 and did the high jump, but I was really bad at it. I never actually knew there was a bar in the high jump. When I came to college I wanted to do a sport where everyone goes into it having no idea what they’re doing. And to me that was only really rowing. As soon as I got to school, I was asking my freshmen year RA ‘when can I sign up for the crew team.’ I was just so excited to try it.

KK: Do you plan on continuing to row after graduation?

ES: Yes. I want to see if I can work with my parents to get a single [a one person rowboat] as a graduation gift. Then I can row whenever I want. I’m also thinking of if I end up in Boston I can end up near the Charles River and probably join a crew club, whether or not it’s competitive, just to make sure I keep rowing.

ES: I would have to say [senior rower] Carolyn McDonough. She has changed me as a person because the past three years, we’ve been a pair. She’s a person who’s always in your ear saying, ‘You can do this, keep going’ and she always has this amazing positive attitude. It’s very impressive because sometimes rowing is a really tough sport.

ES: I would say chocolate milk. I don’t know if that counts as a food but there are pictures of me at regattas with half a gallon of chocolate milk just chugging it. Chocolate milk is my life-sustaining beverage.

KK: What is something that most people don’t know about you?

ES: Everyone knows I love rowing, obviously, but it’s a really tough sport and I think you definitely have to teach yourself how to have that new mentality. No matter how long I’m rowing, teaching myself how to mentally deal with it. I would say the one thing people don’t know about me is that rowing has changed my life, not as an athlete, but in every single aspect of my life. I am a completely different human being from my freshman year. It’s the biggest and best decision I have ever made in my entire life.