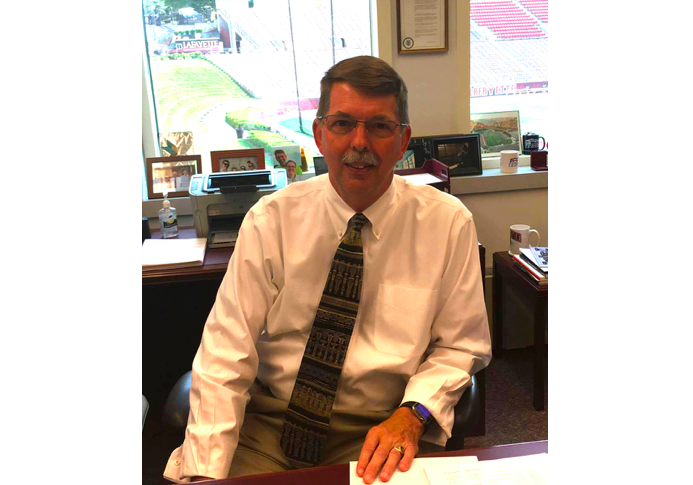 Athletic Director Bruce McCutcheon has announced his departure from Lafayette after 16 years, effective once a replacement is found. McCutcheon said his work with Lafayette improved the athletics department on certain accounts, but the success rate of the teams leaves something to be desired.

“I can walk away from here after 16 years and say that I’ve clearly left this better than I’ve found it in multiple areas, [but] not in all areas,” McCutcheon said. “Clearly the success rate of our teams is not where it needs to be, and that’s not where we want to be and I’ll take a hit for that.”

McCutcheon said he made his decision last spring, but told the campus community on Sept. 21.

He added that he is not retiring for good but is looking for a job with less maintenance.

“I’m not done working, I’ve got tons of productive years left,” McCutcheon said. “I’m looking at and pursuing a couple different opportunities. Nothing is set in stone yet. What I do know is that I don’t want to work nights and weekends like I have for the last 35 years.”

Prior to his tenure at Lafayette, McCutcheon graduated from the College of William & Mary in 1976, and went on to be the assistant athletic director at both Temple University and Southern Illinois University until his start at Lafayette in 1990, according to his GoLeopards biography. He also earned a Master of Arts degree in Sports Administration and a Doctor of Philosophy degree in Sport Management both from Ohio State along the way.

Major changes have taken place under his leadership, and McCutcheon said he’s witnessed much growth of the department.

“When I took over this fundraising for athletics was in the $375,000 range,” he said. “Today, we’re raising over $1.5 million in athletics. Our facilities situation is light years ahead of where it was when I started. We have quality people in place that are coaching. Those are things I look to to say there has been progress.”

“When I first started, we had a strength coach part time that worked principally with football,” McCutcheon added. “We now have 3 full time staff members in the strength and conditioning area and performance is at the center of their work. Our sports medicine staff is larger and stronger.”

McCutcheon said he also oversaw renovations to Fisher Stadium, among other facilities.

One of his proudest moments as athletic director was the rivalry game held in New York City at Yankee Stadium.

“A great memory was the 150th Lafayette Lehigh game at Yankee Stadium, standing on the field and watching the stadium fill up was the culmination of four or five years of hard work to make that come to be, so that was a pretty special moment.”

“We’re definitely a small team, so it does mean a lot,” McQuillen said. “There aren’t a lot of professors or staff that are able to make it out the Friday before spring break when it’s snowing for a big championship. So it does mean a lot that he’s able to and he puts in that effort. He’s also been very enthusiastic about the sport. He asks questions and he tries to understand. It shows that he’s a good guy.”

One swimmer who wished to remain anonymous said that McCutcheon was absent in that sport.

“I think swimming isn’t a sport he takes a lot of interest in,” the swimmer said. “I think he takes more interest in the sports that are more high profile, like football and basketball. He tends to focus on the more high profile sports, even when when the swim team had someone make Olympic trials. He didn’t really talk much about that.”

McCutcheon said getting around to see all of the programs he oversees is a difficult task.

“I try to get to at least one home event for every sport,” he said. “Many times I succeeded. There are certainly times that I don’t. It’s hard to get to a lot. That’s no excuse, that’s just the way it plays out. With some of the other obligations with alumni and alike, there are certainly some sports where I’m more visible than others.”

“I’ve been to every sport’s contest multiple times over the time I’ve been here,” he added.

“I think he struggled to inspire people a lot of times,” McGuire said. “It seemed like you were working for him, not with him. That was kind of the atmosphere he facilitated.”

“The mission wasn’t to prepare kids to be professional athletes. It was to prepare them to be productive members of society,” he added. McCutcheon was known for “putting less emphasis on  on-the-field performance and more on off-the-field things like career development and academic enrichment.”

McCutcheon said the athletics department under his leadership has aimed to make student athletes excel in all areas.

“What we’re trying to do here is educate people so they have the tools necessary [to achieve] the goals they have set for themselves academically, athletically, socially, [and] put them in the very best positions to be successful in each of those areas,” he said.

Despite any shortcomings, McCutcheon is proud of the product of his work.

“We have over 540 students here who proudly wear Lafayette on their chest and proudly represent 18,000 alumni, and do it with great conviction,” McCutcheon said. “To have a successful enterprise, everyone has to play their role and be committed to seeing it through successfully and the right way with the educational mission at its core.”

After McCutcheon leaves the school, he hopes to watch the athletics department continue to improve.

“I’m really excited to watch the growth of the program from the cheap seats,” he said. “I truly believe that this college and its athletic program can embrace each other and have an extremely successful athletic program on the measures of high quality students, high graduation rates, highly successful on the fields and courts of play.”

Pingback: Next athletic director announced: Sherryta Freeman to take over in February – The Lafayette