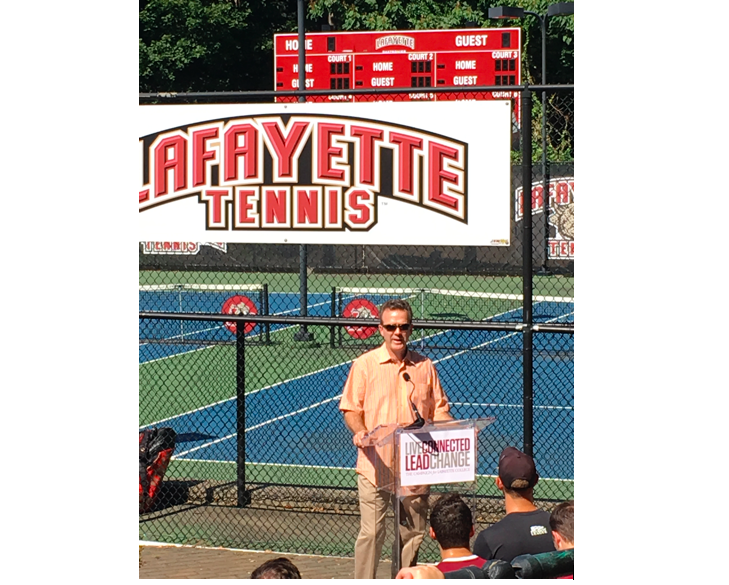 Former tennis coach Pete Tomaino led Lafayette to an undefeated season and headed the team from 1977-1997, winning the East Coast Conference three times. Now, his legacy is sealed with a prominent honor, as the tennis team’s new scoreboard bears his name.

The ceremony to dedicate the scoreboard to Tomaino was held before tennis team matches on Sunday. His former player Robert Lyles ’86, who spoke at the event, wrote in an email that Tomaino was “an omnipresent mentor” who pushed his players to perform their best while maintaining a close relationship with them.

Tomaino said attending the dedication and listening to the remarks was “the most amazing feeling.”

“I had no idea the board was going to be that big or that vivid. To see it live, it was just awesome,” he said. The red scoreboard stands above the tennis courts at 11 feet tall and 24 feet wide, according to Associate Director of Athletics Andrew Foster.

The project was paid for by “The Pete Tomaino Fund,” Lyles wrote in an email. Started “over a decade ago” to help pay for the team’s expenses, the donation fund eventually grew into an effort to provide a “tangible and real” gift for Tomaino.

Two years ago the goal was set to provide a scoreboard in Tomaino’s name, according to Lyles. Ultimately, $50,000 was raised by alumni donors, with Lyles acting as the “point person” for the efforts. The scoreboard cost $45,000, according to Foster.

Current men’s and women’s tennis coach Ralph Van Ormer said that the scoreboard adds a new dimension to the program, making it more attractive to recruits. Previously, flip cards manually handled by players were used to keep track of the score at each court. Now, Lafayette’s courts have a centralized location for scores controlled by the simple touch of a button, still handled by players.

“[Tomaino’s] stoic, calm and collected demeanor allowed us to remain cool under pressure to overcome any adversity that we had faced,” he wrote.

“He always had our back, dispensing sage advice during challenging and formidable years as student-athletes. He supported us constantly and reinforced that needed balance between academics and sports achievement,” he added.

Tomaino has Parkinson’s Disease, and Director of Athletic Development Josh Azer said this contributed to some of the urgency of the project. Tomaino is facing a fatal disease, and Azer said his former players wanted to honor his legacy and his contribution to Lafayette.

Lyles wrote in an email he remembers three phrases Tomaino said during Lyles’ playing years that stuck with him.