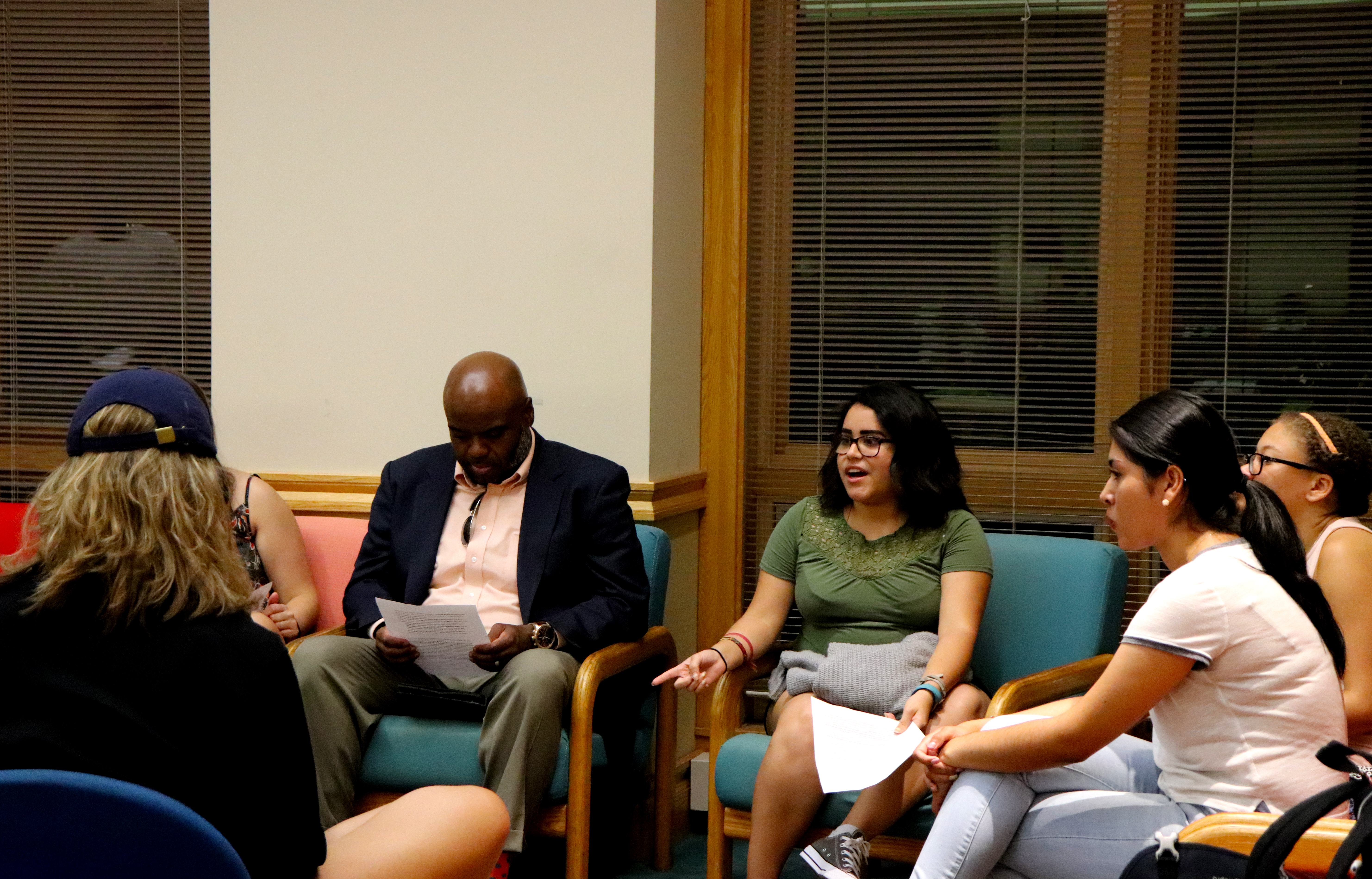 When YouTuber Roaming Millennial visited campus to tell students why she supported Donald Trump, many met her presence with protests and walk-outs. The turnout was so unexpectedly large a move in venue to Colton Chapel occurred to provide for more space. Five days later, those affected by her comments were given a chance to talk in small groups about why they didn’t vote for Trump.

“[The reason why] we named this [event] ‘Why I Didn’t Support Donald Trump’ was in response to the Mill Series event. This wasn’t supposed to be just about not supporting Trump,” Ayat Husseini ‘20 said. “It was about students being able to come into a space and talk about our campus and issues that are specific to our campus and how we feel that has affected us, how we feel we want to move forward.”

Phillip Harding ‘20 took the microphone during Roaming Millennial’s talk and walked on stage next to her in an attempt to directly face her views.

“To limit frustration on my end from speaking across the room, I sat face to face with the [woman] who referred to immigrants like myself as rapists, drug dealers, unskilled and problem starters for refusing to [assimilate] to American Culture, standards, and their mystical norms,” Harding wrote in an email.

Before moving to Colton, the lecture hall in Kirby Hall of Civil Rights overflowed with students who came in both protest and support of online political commentator Roaming Millennial.

Abdul Manan ’18, co-founder of the Mill Series, which invited Roaming Millennial to campus, said that the turnout of student attendees was better than anticipated. The Mill Series is group which holds lectures and panel discussions aimed at fostering “the free and civil exchange of ideas on the Lafayette College campus,” according to their website.

Jovante Anderson ’19 was one of the organizers of the protest against Roaming Millennial.

“We all met an hour before, had a very productive discussion and decided that some of us would opt-out of the event. The other protesters decided to attend, some chose to walk out, some chose to engage her,” Anderson wrote in an email.

The talk started with an open question and answer session and ensued for approximately two and a half hours. As soon as Roaming Millennial started talking, some protesters got up and walked away.

Roaming Millennial, who does not use her real name, is a political commentator on Youtube. She brought up several topics of discussion, such as immigration, assimilation, DACA, the Muslim ban, sexual assault and LGBTQ communities. While she did admit to flaws in her chosen candidate, her support for Trump was clearly stated.

“Donald Trump was an awful candidate who behaved poorly, whose victory was only made possible by even worse candidates, [like] Hillary Clinton,” she said during her talk. “His famous soundbite of [him saying that] illegal immigrants are rapists and drug dealers—that is accurate.”

This statement angered several students who walked out of the venue at that point.

Iyana Banks ’21 left the talk in protest originally, but ended up coming back in order to argue against and prove wrong what Roaming Millennial was saying.

“I left, in order to show my solidarity with the protest and because her views were downright ridiculous [and] hypocritical,” she wrote in an email. “I came back because I wanted to make sure that there were people there who could use sources and cite information to prove her ideas wrong, though even when people did she didn’t listen.”

The exodus of several attendees was noticed by both the crowd and Roaming Millennial herself, who later tweeted “I wasn’t expecting so much emotion and triggering over what are very mainstream right/even center-right positions. Much feelings, few facts.”

Francie Keeler ’21 agrees that it’s important to discuss different views such as Roaming Millennial’s, but still felt her views touched on sensitive topics for students.

“[Though] It’s good to experience a different opinion than the one you’re usually surrounded by, the things she said were still upsetting,” Keeler said.

“From the time I learnt about [the event], I was convinced that ‘Why I Didn’t Support Trump’ was a meaningful endeavor, and that it would be of great value to the discourse on campus. I went to contribute in any which way I could,” Manan wrote in an email.

While the event wasn’t as widely attended as Roaming Millennial’s, Danielle Kats ’19 feels that numbers were sufficient for important conversations.

“Anything student run…is not going to attract focus….but I’m very happy with the attendance. The 40 some people that were here are hopefully more educated as a result of it and have more perspective as a result, which they can then use in conversation with their friends, so it’s going to have a ripple effect,” Kats said.

President Alison Byerly said that although Roaming Millennial was hosted on college property, Lafayette “does not endorse the views of the speaker.”

She added that the college supports free speech on campus in order to facilitate an open and ongoing dialogue. However, although she did not attend the talk herself, after speaking with some who attended the event and learning what Roaming Millennial had to say, she does not feel that the speaker was a “particularly productive contribution to the dialogue” on campus.

Once again, a community of college students who have failed to have a real discussion based on facts and logic have wasted a speaker’s time at an event by whining and telling her their life stories. If many of the ”offended” would walk off of campus and open a dialogue with any citizen in that county that was not on campus, they would likely be discussing politics with a conservative, as most people in that area are not liberals. To fully understand a political topic, you must listen to both sides. Unfortunately, most of the students at the event use identity politics in an attempt to shut down debate. Conservatives understand the talking points of the leftist progressive agenda. It is the same as watching the liberal news outlets: all attacks on character and suggesting that if you do not agree, you are a (insert character attack here). Please open your minds in the future when participating in a debate or discussion. If you cannot, you do not have to attend, although you are free to do as you please. Good day to you.

What Kyle said. Spot on.

Believe it or not, there is a world that exists beyond your campus of group-think. Think for yourselves.

The article clearly states that there were students at the event that supported the speaker. Why was not a single such student talked to for the article itself?

Petty, entitled, spoiled, children, ranting on about their ‘lived experience’ as if it’s significant to an objective debate. If these kids are the future, the future is in real trouble. It’s madness that so many ‘protested’ Roaming’s talk by leaving or not attending, thereby protesting something they are unaware of.

At no point did RM actually proven wrong, everything she said was dead accurate,the students that go to this U should be ashamed of themselves

P.S. she made a video response, you should watch: https://youtu.be/mFnEUxBfJlU