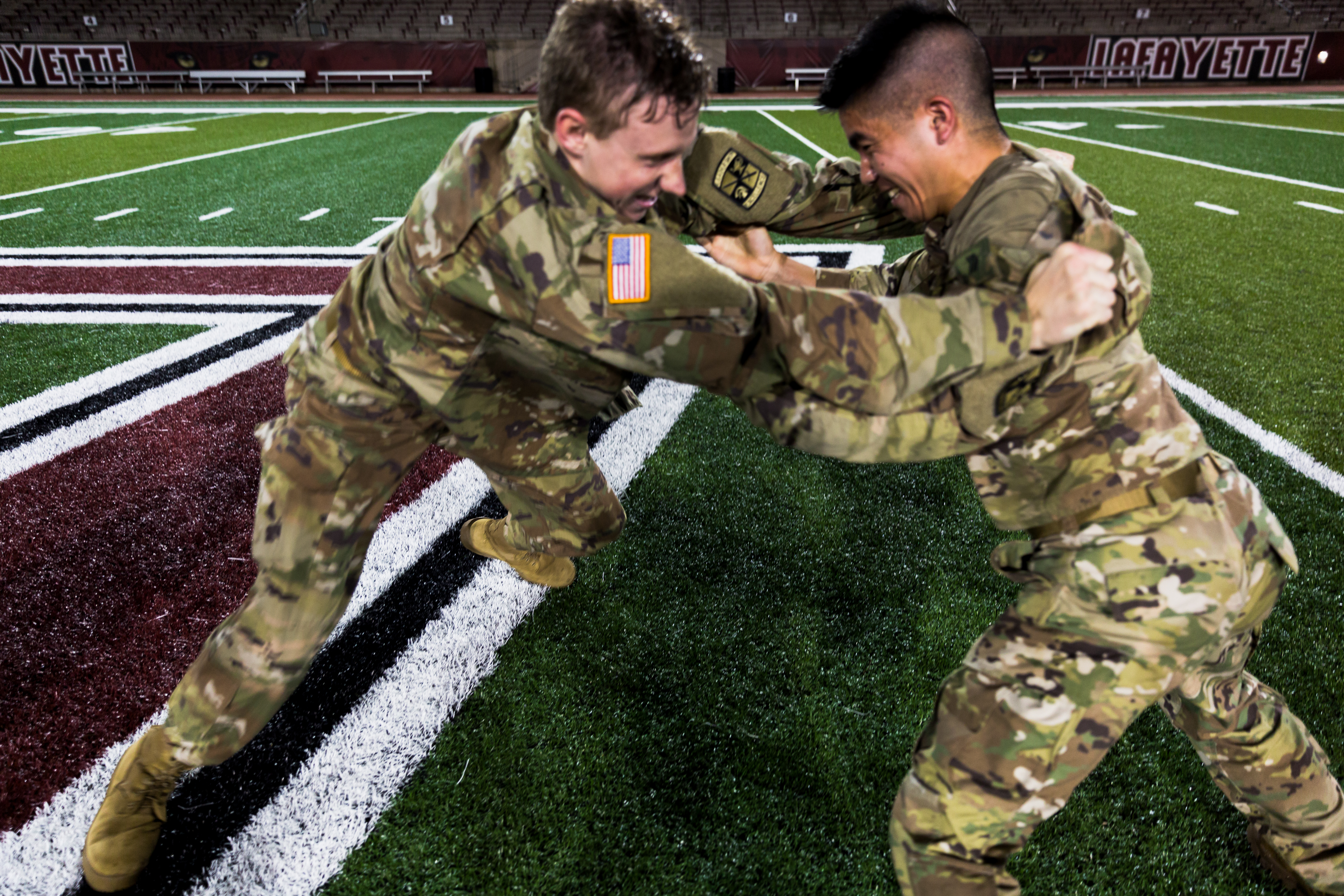 With increased participation in the program, The Reserve Officers’ Training Corps (ROTC) cadets are now able to hold all but one of their physical training sessions on campus. In recent years, the cadets had to drive to Lehigh University for physical training three days a week.

“Back when I first got here it was me, three other freshman who ended up dropping the program, and a senior. This is my third year being the senior cadet,” David McGriff ’18 said.

McGriff is the only senior cadet in the military science program at Lafayette and has been the oldest cadet since his sophomore year. The program currently has 12 students.

Shifting ROTC training to Lafayette’s campus has been a long process which started McGriff’s sophomore year. He explained that very few practices were held at Lafayette his sophomore year, and by last year one or two practices a week were on campus.

This year, one workout each week still occurs at Lehigh and includes the entire battalion made up of ROTC students from all of the Lehigh Valley’s colleges. They still travel to Lehigh for military science labs and classes.

McGriff feels those freshman his first year dropped the program in part due to the commute, and that no longer having to drive to Lehigh five times a week “helps with retention.”

Jaspreet Gill ‘19, wrote in an email that training on campus at least three days a week is beneficial to keeping students in the program.

“In previous years, students of Lafayette who may be wavering about ROTC due to time commitment would choose to drop it due to the early morning commutes,” he wrote.

Lieutenant Colonel Mike Farmer is the Department Chair and Professor of Military Science and Leadership at Lehigh and is in charge of ROTC in much of the Lehigh Valley. He is also responsible for location changes for the programs.

“Foremost, I consider the resources and facilities available for the training, although I also weigh the campus distribution of those cadets that are attending the training,” Farmer wrote in an email.

The ROTC program at Lafayette falls under the umbrella of the Lehigh Valley Steel Battalion which is a cooperative effort between many schools in the Lehigh Valley. Depending on Lafayette enrollment in the program, it can be hosted either on campus or at Lehigh University’s Coxe Laboratory, according to the Lafayette website.

Harvey Situ ‘19 is unaffected by the location change because he is a member of the Ranger Challenge team which meets at Lehigh five days a week anyway. He said that this year has brought other changes to the ROTC program, with a new physical fitness incentive program that allows cadets who have passed physical training tests to be excused from PT sessios during the week.

McGriff said Lafayette ROTC is trying to host workouts on campus for the entire battalion later in the year and should be able to move one of the nine-hour labs to campus if they can “get the resources and not get in trouble with Easton PD.”

While the change in location has eased the time commitment for several cadets, Gill feels it has also created better representation for ROTC within the campus.

Along the same lines, Situ said, “the importance of the shift also suggests that the Lafayette ROTC contingency is not only growing but also performing well enough that our instructors trust the us to plan and execute events and lead the program.”

While the numbers are up this year, Vice President of Campus Life Annette Diorio said that unless there is more substantial growth, it is unlikely Lafayette will reestablish its own military science program.

However, continued growth could lead to other changes in the program.