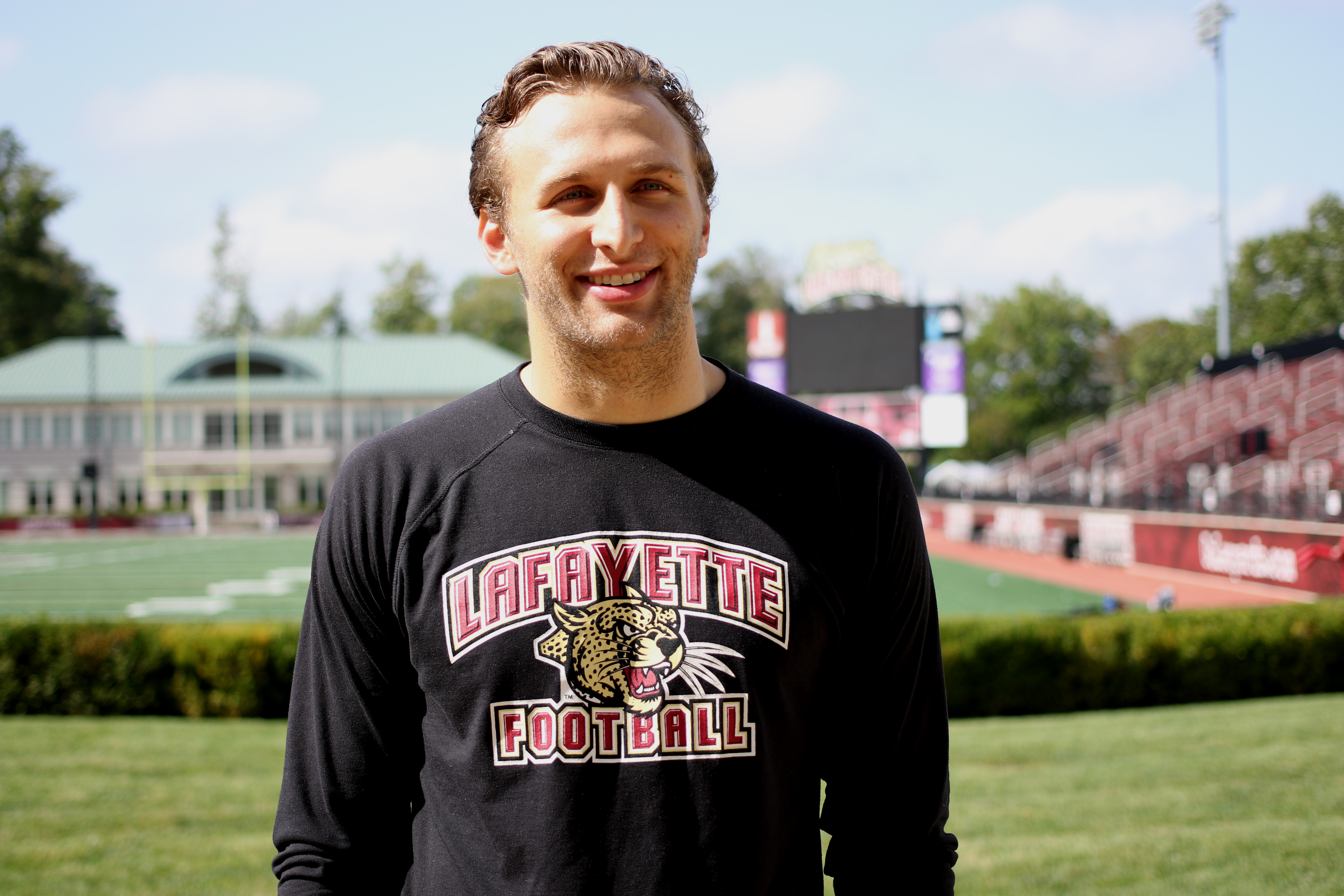 Amy Hewlett: It’s your last football season at Lafayette. How does that make you feel?

Matt Mrazek: It’s kind of scary. It’s gone by really fast, but it’s definitely really exciting that the other seniors and I are the official leaders on the team now. We kind of get to step into that role.

AH: What goals are you hoping to achieve this season?

MM: Constant and continual improvement has always been our goal under Coach Garrett and this new staff. I think the ultimate goal is just to change the culture and have a winning tradition at Lafayette. We’ll just do that on a week to week basis.

AH: You’ve been rising up in the record books, [do] you want to talk about that?

MM: I try not to worry too much about that stuff. I’ve had some great quarterbacks in my time here and some great teammates and I attribute the success that I’ve had a lot to them. However I finish in terms of records is great to look back on when I’m done here, but for now my focus is game by game, week by week.

AH: What didn’t go well in the Villanova game and how do you think the team can grow from that?

MM: We’re already past the 24 hour rule, so we’ve watched that film and broke it down and I think the biggest thing we can learn from that is just overall execution. We also need to be able to compete regardless of who we’re playing and competing for the entire game.

AH: What do you think the team’s biggest strengths are?

AH: You have almost an entirely new coaching staff. What is different about this year’s staff?

MM: The biggest thing they’ve done is renewing everyone’s love and passion for the game. The way they do that is through their own excitement at each practice. I think that’s my favorite thing that they’ve all done. They take practice and other things that usually aren’t fun and they make it fun.

AH: How has the freshman class been contributing?

MM: A lot of them had to step up and grow up fast, which is tough for Division I football, but I think all of them have really stepped into the job and have taken the coaching. I think they’ve had a lot of success for the most part. It’s a tough thing to ask of a freshman coming in, especially at a position like quarterback, but Sean O’Malley has really taken the position and has run with it. All of the other freshman too, I think they’re all doing a great job.

AH: What has been your favorite part of being on your team?

MM: The friendships and camaraderie you get from these four years. It’s kind of cliché, but everyone talks about the brotherhood of the football team [and] I really view all of my teammates as brothers. You make these friends that you’re going to have for the rest of your life.

AH: What is your favorite football memory?

MM: Freshman year at Yankee Stadium when we beat Lehigh, that was a great game. I was able to catch that touchdown at the end too, so not only was it a great experience, but also personally I was able to score that game so that was awesome.

AH: Do you have any pregame rituals?

MM: I have a lucky charm bracelet that I have from high school that I kind of hold before every game. Other than that, a teammate and I like to go out early and run around and play catch to get loose.

MM: The Chicago Bears, unfortunately. I might be making the transition to the Tampa Bay Buccaneers, but I’m from Chicago so I’ve always been a Bears fan, but it’s been tough for a while.

AH: What is something most people don’t know about you?