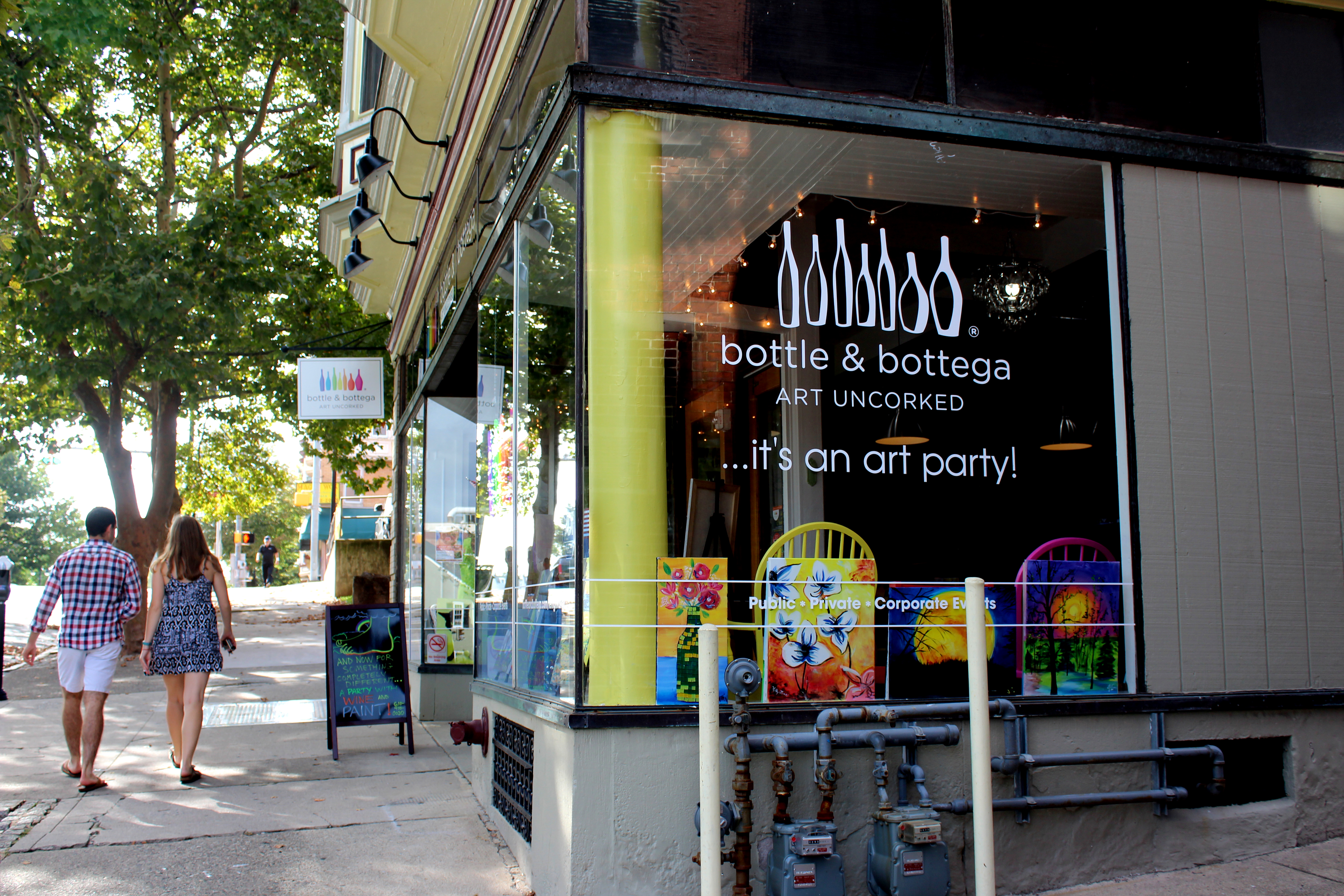 Bottle and Bottega, a new ‘paint and sip’ shop in Easton, opened in the spring (Photo by Adrianna Barazotti ’21).

As “paint and sip” shops pop up across the country, Easton introduces its own Bottle and Bottega. The BYOB studio, located on Northampton Street, opened in April.

Owner Kory Kennedy said he invites all those over age 21 to come and find a little inspiration from wine.

“When we are instructing a painting and a person gets a little flustered we’ll often say ‘take another sip of winespiration.’ This is a BYOB business though, so it is up to the customer if they want to drink while here,” Kennedy said.

After spending a year and a half running a mobile business, Kennedy decided Easton was the best place in the area to open his studio.

“Easton just had that community and artsy feel to it, and because we have our customers bring their own snacks and drinks we wanted to be near some cool restaurants like the Easton Public Market,” Kennedy said.

Growing up in the Lehigh Valley area, Kennedy always had a passion for art and painting, he said. After graduating from the Parsons School of Design, Kennedy spent 20 years as an art director for various magazines in New York City.

“I was ready for a change, and my wife and I wanted to move back to the Lehigh Valley area. One day, we went to a paint and sip studio and had a lot of fun. It took me back to my roots. So we moved and joined the franchise,” Kennedy said.

While a few different paint and sip franchises exist, Kennedy said he was most attracted to Bottle and Bottega.

“Bottle and Bottega was very interested in creating a studio that is very warm and inviting, just a place where people can hangout. In other franchises you see some will have their customers sitting on stools and it is more like an academic building,” Kennedy said. “We aren’t an art school, we are an art party business.”

With different colored walls covered in art and several nooks and crannies, the 1,800 square-foot studio is brimming with character.

Customers paint on dinner-like tables while sitting on an eclectic collection of colorful chairs. There are also two lounge areas in the studio, encouraging customers to also relax and have fun.

Bottle and Bottega offers canvas, glassware and wood pallet painting, mixed media art and holiday-themed projects, according to Kennedy. An artist gives step-by-step instruction to help customers create a piece that they are proud of.

“We take a painting and break it apart so that we instruct it in the simplest way so people can follow,” he said. “We try to make sure that everyone’s artwork turns out presentable.”

While wine glasses, cutlery and painting supplies are provided, customers are instructed to bring their own food and drink, Kennedy said.

Bottle and Bottega also offers private events, which allows customers to reserve the studio. According to Kennedy, the event host has the freedom to pick out what kind of piece attendees will create.

“It would be great to have Lafayette organizations book private events with us. They can come in and collaborate on a piece of artwork together in a creative and social setting,” Kennedy said.

Kennedy said he is happy with Bottle and Bottega and believes it makes a great addition to the community.

“Everything is so plugged in and technology driven now. I just love the idea of going back and getting my hands dirty. What you see is what you are making and what you make at the end of the day is what you have,” Kennedy said.